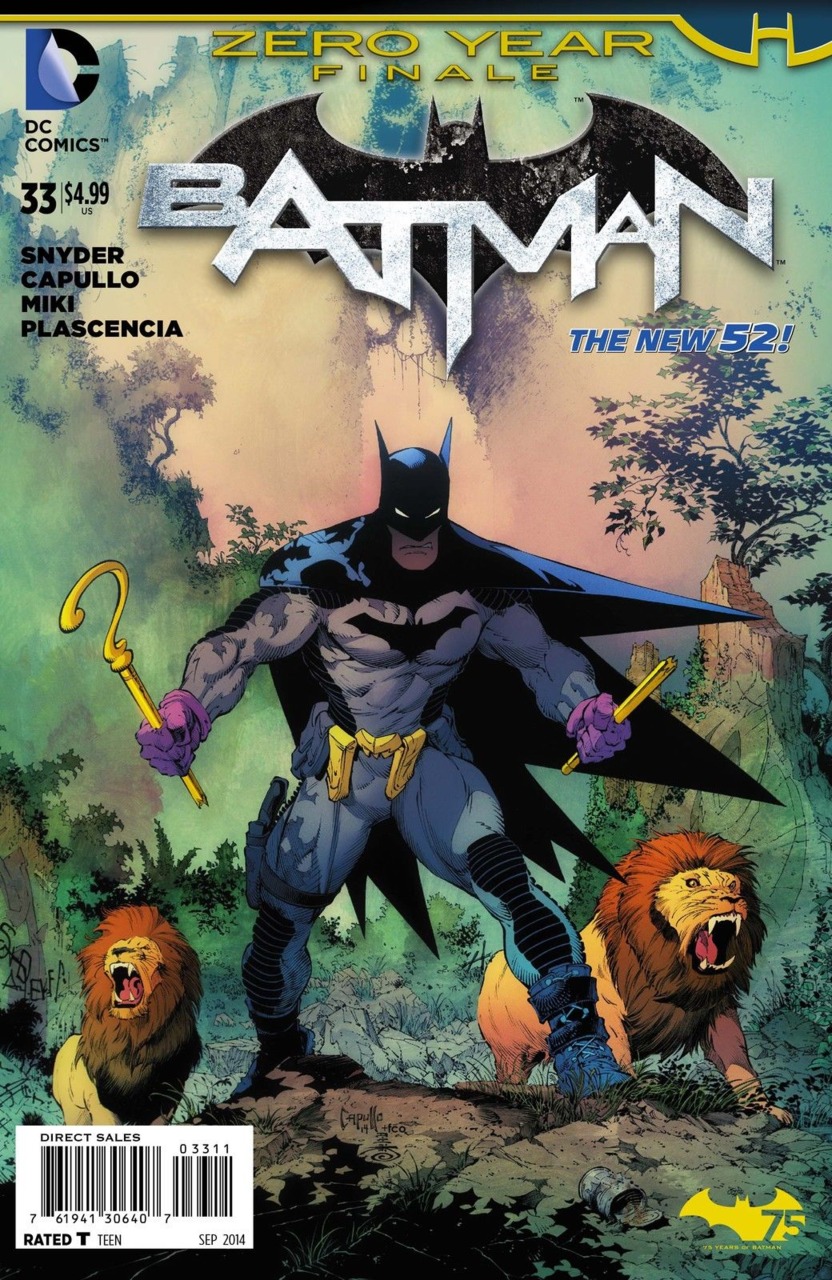 I’m about to get real here, so brace yourself. So last night, I read Batman #33. The final issue of Zero Year. There was so much to ponder, that I had to sleep on it. And after thinking about it, I’ve come to realize that Snyder & Capullo have made me connect with Bruce in a way I never have before. These guys took this story to a personal level. And, yes, they made The Court of Owls, & Death of the Family personal to Batman, as a character. But never have they made it personal for the reader… Not like they have with Zero Year. And the beauty of it all, was that it caught you when you weren’t expecting it.

At first, we were mad, because ‘He’s redoing (or undoing) what Year One did!’ And because we all love Year One, we took offense to this story. Later on, we got upset, because it was just turning into a Riddler epic, instead of telling us the origin of Batman. What we failed to notice, were all the small lead ups, the single pages that made us scratch our head, and then forget about once the issue ended. Those were the most important parts. Those built up, and were explained in this issue. The Riddler story was good, and probably one of my favorite portrayals of the Riddler, making him a big threat. But the real story is what was believed to be a side story. One that grabs you, and gets you choked up.

Mask of the Phantasm is held up as one of the best Batman movies. I have that movie, and I’m considering watching it right now… What this issue of Zero Year does, is touch on some points. Some aspects of Bruce that haven’t really been touched on since that movie. We really see the attachment between Bruce & Alfred. We see how much Alfred cares for Bruce, and how badly he wants him to be happy… How he wants to see Bruce live his life. And it’s freaking beautiful to see this scene in the book. Bruce also makes it clear what he wants for himself…. What truly makes him happy. And I hope that because of this realization, the storytellers telling us that Bruce is happy because he is Batman, I hope we see some of Batman having fun. He’s been through a lot, but once things settle down, I hope Bruce has fun again. Because with Snyder & Capullo making me connect with Bruce for the very first time, I don’t want to see a miserable Batman. I want him to be happy.

We pick up where we left off with last issue, Batman has found Riddler, who has told him that they will play a game. Riddler has made the precaution of rigging the weather balloons, so that Batman has no choice but to play.

At the same time Gordon, Lucius, and the military team is trying to figure out how to prevent the jets from blowing up the city. Gordon climbs up the side of a building with a flare gun to signal them & call them off. An owl startles him, though, and he drops his flare gun. In panic, he looks around the room to find something, as the jets have arrived, and are circling the city.

The Riddler begins asking a series of riddles, each a famous unsolvable riddle. Batman goes through the test, Riddler says he’s wrong… But is he? I don’t know. I’m not smart enough to answer these riddles myself. But Batman has blocked the Riddler’s receivers by using the giant penny. Gordon has painted a bat-symbol on a mirror, and is reflecting it at the pilots, which doesn’t stop them, but does stall them enough… As Riddler has revealed that he has an electrode connected to his heartbeat. Once taken off, it shuts down all power. It has to be bonded to a new heartbeat, and then restarted with 1,000 bolts of electricity. Batman knocks Riddler out, takes the electrode, bonds it to his heartbeat, and shocks himself with a defibrillator. Alfred resuscitates Batman, and the power to the city comes back on, calling off the strike force.

ONE MONTH LATER, Bruce is giving another speech. He introduces Lucius as the leader of Wayne Enterprises (doesn’t say if he’s CEO, or Head of Business Operations, or what), and has a chat with Commissioner Gordon. We see Riddler has been taken to Arkham, and the hope that keeping a criminal there will be a one-time thing. Bruce also bought him a new coat. Same brand, same style, as a gift.

Now for the emotional part… Julie Madison has come to see Bruce. Alfred encourages him to reconnect with her, but Bruce tells him that he’ll never quit being Batman. Alfred thinks that he just doesn’t know where life will take him. After all, he’s only 25. Bruce explains to him that when he was younger, he was having mental issues. Everywhere he looked, he saw his parents. He saw them getting shot. He wanted to reset himself, so he hired a hobo to pretend to be Alfred so he could get the papers signed, and some doctors to shock him until he was ‘something else.’ The was the procedure was almost done, when he called it off. He had to find a way to fight through it. Being Batman does that for him. Being Batman makes him happy. Alfred doesn’t think he understands what true happiness is, and begs him to talk to Julie. Bruce leaves it up to him, and we see Julie and Bruce connect, fall in love, have kids, take them to the movies, play with Godzilla toys, grow a mustache, and he thanks Alfred for making him talk to Julie. However, this is all Alfred’s dream. He looks around, and tells Julie that Bruce is already “spoken for”, as we see Batman swinging through the city.

That’s freaking gorgeous writing, you guys. That last scene between Bruce & Alfred may be my favorite ever. It gets me all emotional every time I read it. If it doesn’t get to you, YOU HAVE NO HEART. My only complaint was by the end, it felt like Gordon was rushed into being Commissioner. Lots of times, prequel stories feel like we have to be at the status quo by the end of the story, and that’s not necessarily the case. We don’t need everything so neat & tidy by the end. We know the characters will be there eventually. But that was just a minor thing. This was a work of art, and I give…