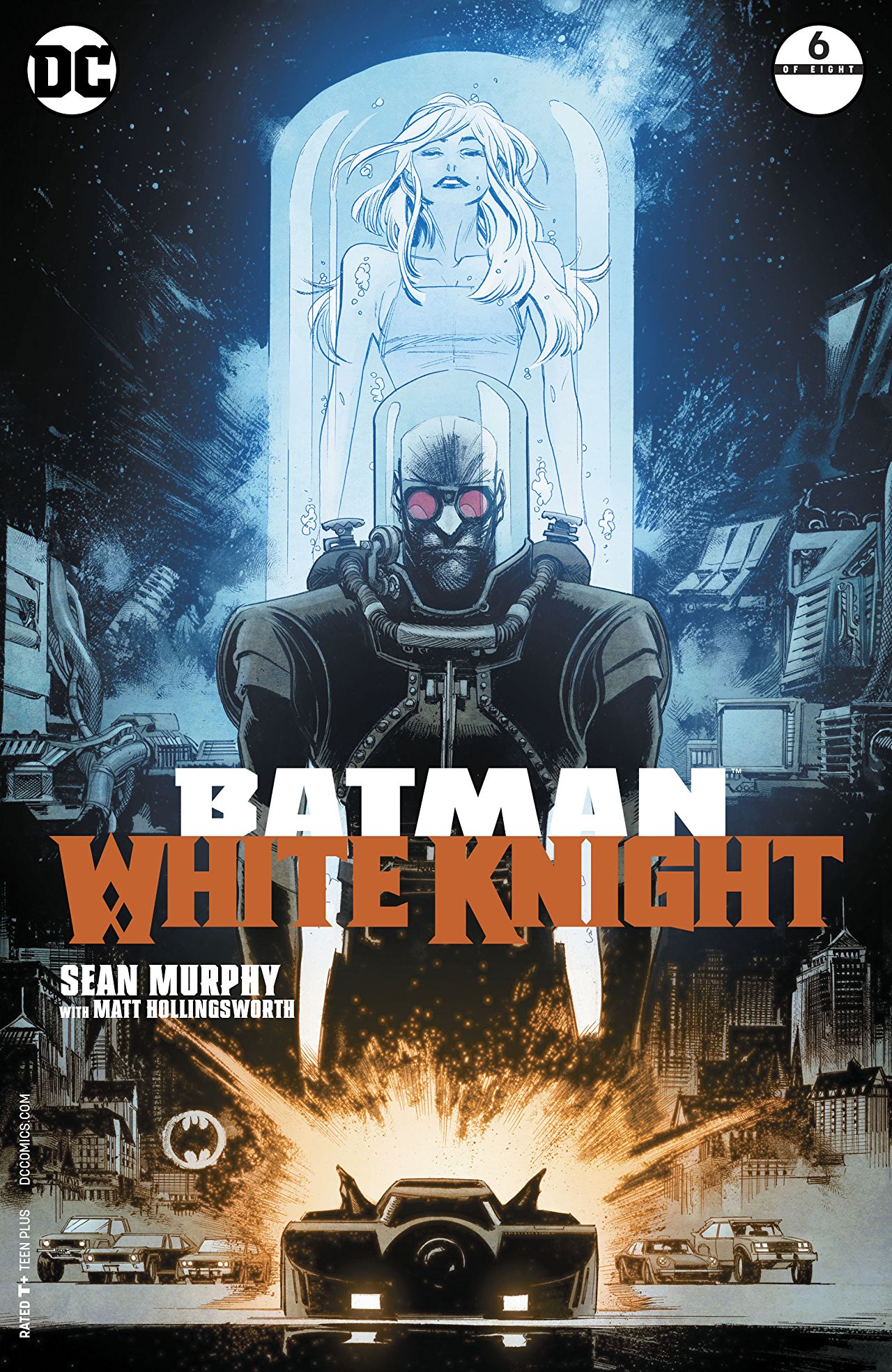 Overview: After the GTO unit moves to arrest Batman, Neo Joker uses the giant freeze cannon to hold Gotham hostage and demand the return of the real Joker.

Synopsis (spoilers ahead): Gordon, Jack, Harley and the GTO unit concoct a plan to arrest Batman. Nightwing decides to go along with it on the condition that Batman’s mask stays on. Batgirl wants no part of the plan and leaves. The plan essentially involves mobilizing the GTO vehicles to chase the Batmobile into a trap that will blind Batman and then use an EMP to neutralize the Batmobile. As the GTO cars would not be adequate for this, Montoya suggests using something as tough as the Batmobile but also old-school and analog. Nightwing decides to steal an old Batmobile and Gordon decides he’s going to drive it and serve as the point man on this mission.

The GTO executes the plan flawlessly and Gordon finishes the job by ramming his stolen Batmobile into Batman’s ride. A weakened and bloody Batman manages to emerge and flee the scene of the collision before he runs into Jack. Jack confesses how conflicted he is about the whole episode but also taunts Batman into fighting him. Jack uses his newfound strength and fighting prowess he learned from Harley to choke the weakened Batman into unconsciousness. After finally beating his nemesis, Jack breaks into tears and questions if he has done the right thing. He takes the unconscious Batman back to Gordon and the police so they can lock him up in Arkham.

It is at this juncture that Neo Joker makes her move. She uses the gang of villains to raise the freeze cannon over Gotham Harbour and fire a blast at the city. Gordon, Nightwing, Jack, and Harley take a helicopter to survey the damage and they see a message to “Send Joker” written in ice on one of the buildings. Batgirl goes back to Victor Fries’ lab where Victor tells her about the history of the relationship between the Wayne and Fries family and how Alfred died. He claims to know nothing about the cannon and just wishes to be left alone with his wife as she dies.

Meanwhile, a frantic Jack is taking too many pills as Harley implores him to take Neo Joker seriously and let Batman handle the super villains. As the pair head to the GTO bunker to develop a plan with everyone else, we see that Batgirl might have overheard their entire conversation. The mood in the GTO bunker is one of feverish desperation. While discussing their options, Jack appears to become overwhelmed, the Joker emerges and says that they’ll give Neo Joker what she wants.

Analysis: Issue #6 moves the story firmly into its penultimate act. Gordon finally decides to make a move to arrest Batman. I’m not surprised Nightwing and the GTO went along with his plan, but I am surprised that Batgirl refused to be a part of it since Gordon is her father and she was the one who originally suggested that the GTO might be a good idea. The chase scene itself is masterfully done and combines the best elements of a noir film and action thriller. The way the first few pages are set up with panels of the GTO discussing the original plan interspersed amongst the action of the chase sequence gives it a distinctly cinematic feel and really helps to build the tension. The action isn’t as engaging if the reader knows the plan beforehand and doing it this way allows for some added suspense. Batman fans everywhere will love the inclusion of ’89 Batmobile. Its inclusion is not gratuitous as it serves a narrative purpose, and it was exhilarating to see it race a more modern incarnation across the streets of Gotham. Fans of Gordon’s “I got to get me one of those” line from the Dark Knight movie will be happy to see that he does indeed get to drive a Batmobile here. Murphy has a marvelous talent for drawing vehicles and he does a perfect job rendering the classic Batmobile.

We also start to see Jack become a little more unsure of himself in this issue. For all his talk about doing what’s best for Gotham, he’s clearly still being motivated by his own ego to a certain degree. We saw that at the beginning when he staged the attack on the library, but in this issue, he goads Batman into fighting him just to prove he can beat him hand to hand. He confesses to being conflicted about the whole thing and breaks down into tears of sadness after beating Batman. To me, this is what has made him such a fascinating character in this story. I don’t feel like I’m ever able to get an accurate read on Jack because he is continually struggling with coming to terms with what each side of his personal wants. We typically see Batman struggle with different parts of his identity so it’s nice to get a story where Joker becomes a little less two dimensional and has a similar struggle. In his dialogue with Batman in this issue, we can hear echoes of the Joker from issue #1 telling Batman that they have a special relationship. Jack seems to love and hate Batman just as he seems to love and hate himself. For example, he clearly expresses sadness for humbling Batman but later on, he is adamant against allowing Batman to handle Neo Joker.

Jack isn’t the only one with a “What have I done?” moment in this issue as Harley asks the same question after Neo Joker uses the freeze cannon on Gotham. It appears that she feels a sense of responsibility for the presence of Neo Joker. Despite that, she also tries to appeal to Jack to take Neo Joker seriously; not just as a threat but also as a person. This appeal has a feminist angle to it too as it can be read as a criticism of some of the casual misogyny directed at the Harley character over the years. I could be reading more into it than was intended, but I think that’s a reasonable inference to make.

I said in my last review that I would be interested in seeing how the Wayne-Fries connection played out. While this story doesn’t fully embrace the Telltale game route (for lack of a better term) and make Thomas Wayne a pure villain, it still gives him questionable ties to Nazis while trying to accomplish something good. I found Victor’s story about his wife and their relationship with Thomas Wayne to be quite moving and it’s definitely a novel interpretation of a classic villain. Victor has always been somewhat of a sympathetic figure and Murphy really dials into that in this issue.

The art is up to Murphy and Hollingsworth’s usual high standards. I felt like this was by far the most visually vibrant of all the six issues to date and a welcome change from the solid orange backgrounds from the previous issue. Hollingsworth deserves special praise for accomplishing that while still maintaining the minimalist touch he has had for the whole series. I’ve already praised the way Murphy set up the panels in the car chase sequence, but the double-page spread of Batman and Joker’s fight was just as impressive. This key moment in the story has all the energy and brutality one looks for in a confrontation between these two iconic characters. The reds are dark enough to symbolize hate and yet light enough to hint at love, perfectly highlighting the complex nature of their relationship.

While I loved the art, there is one minor thing that bothered me about the last panel on the first page and the first panel on the second page. In the last panel of the first page, the characters are placed in certain positions and then those positions change in an impossible way in the next panel. There is also a small error in the script on the first page where Gordon says “…put and end to this”. The script can be fixed in subsequent printings and both of these issues are very small issues and didn’t really take away from my enjoyment in any way. And yes everyone, I do see the irony in me pointing out grammar and spelling errors when my own writing is full of them.

Final Thoughts: Yet another issue that continues a riveting narrative with gorgeous art. This issue has everything; including an incredible car chase sequence, a brutal fistfight, characters coming to terms with the consequences of their own actions and a fresh take on a classic villain. That’s all without mentioning the cliffhanger and the potential return of the greatest villain of them all. An all-time classic Batman story moves gracefully into its final act.