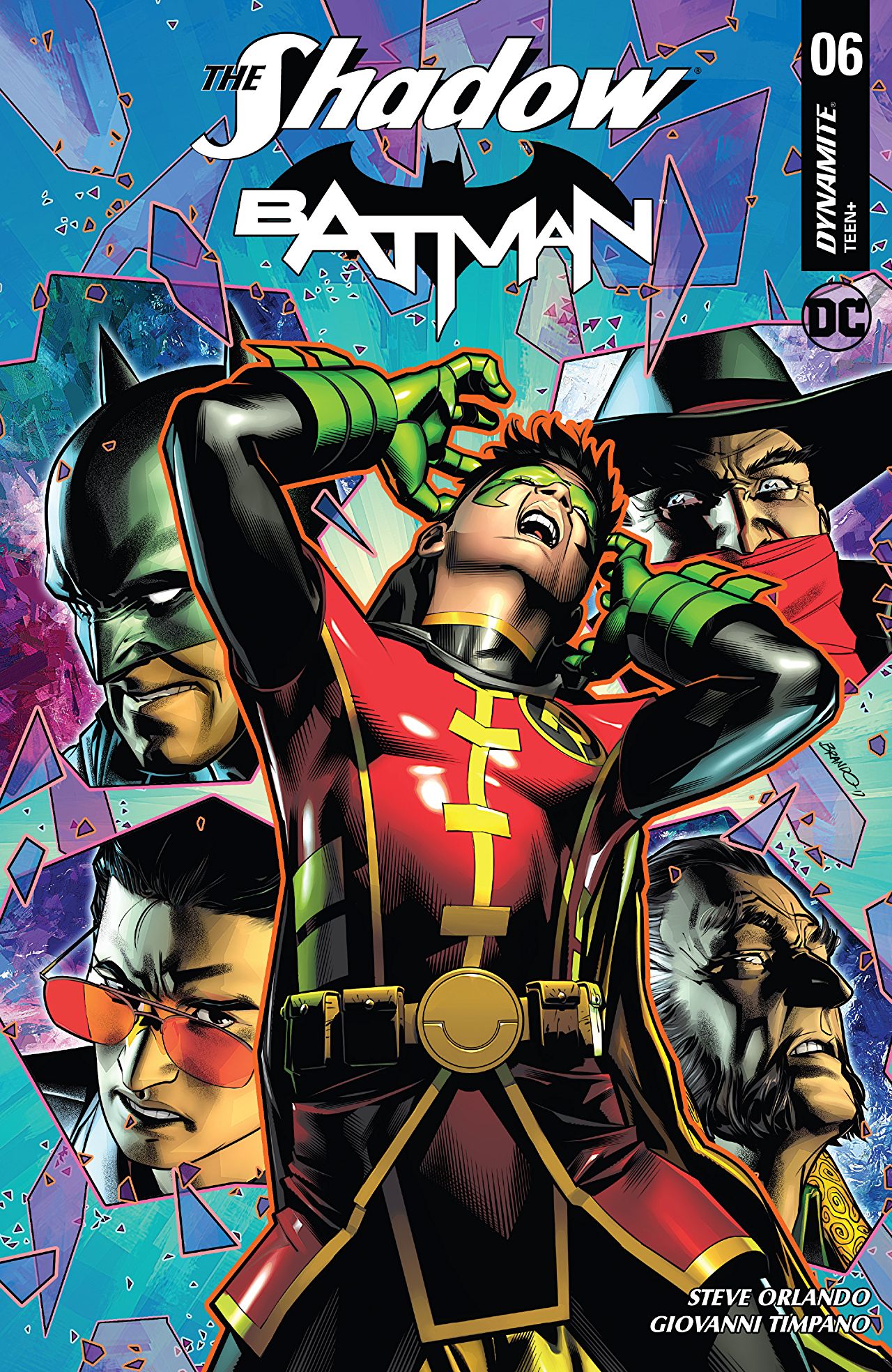 Overview: The miniseries comes to a close with Batman facing off against a mind-controlled Robin and Ra’s al Ghul as the Shadow battles Shiwan Khan.

Synopsis (spoilers ahead): The issue opens at the Silent Seven’s headquarters, with Batman facing off against a mind-controlled Robin as Ra’s al Ghul looks on while the Shadow and Shiwan Khan circle each other preparing to fight.  The Shadow and Khan battle across a surreal landscape called “The Thaumic Plane”, which Khan says in the world inside his head as Batman defends himself against Robin’s attacks in the real world.

The fight isn’t going the Shadow’s way, with Khan summoning a group of large insects which begin to eat away at the Shadow.  To Khan’s horror, the Shadow’s mutilated corpse gets to his feet and knits itself back together, with the Shadow revealing that they are in fact battling inside the Shadow’s mind. The Shadow states that he has realized his place in the world and causes some sort of psychic shockwave that incapacitates Khan, on both the Thaumic Plane and in the real world.

Meanwhile, Batman continues to fight against both Ra’s and Robin, and as Batman is brought to his knees with Robin about to stab him with a knife, the Shadow breaks Khan’s control and brings Robin to his senses. Ra’s grabs Robin and puts a blade to his neck, as all over the world, the dead agents that Khan was controlling disintegrate into dust.  The Shadow appears behind Ra’s and the two fight as Batman and Robin speak.  Batman tells Robin that they have to leave the system the Silent Seven put in place as it is too integral to the world economy, and Robin convinces Batman to trust him that the world will be fine if they destroy the Silent Seven’s network.  Batman and the Shadow defeat Ra’s while Robin releases information on all the technologies that the Silent Seven have been keeping from the world and destroys their network.

The story flashes forward several months a New York City filled with technological marvels such as flying police cars and H2O powered cars as Batman, Robin, and the Shadow look out over the city.  Khan is revealed to have his mind clouded and is working in the Wayne Enterprises mail room where he can learn humility, while Ra’s is caged, suspended over a Lazarus Pit but unable to use it.  The Silent Seven’s headquarters is destroyed and Wayne Manor is rebuilt.  The series ends with Batman, Robin, and the Shadow leaping off into the night, united.

Analysis: This issue brings not only brings this miniseries to a close but ties up the Shadow’s story from the previous Batman/Shadow crossover.  It was a smart decision to have writer Steve Orlando handle both series as there’s a real sense of continuity between the two series.  I like how Orlando chose to set up a larger character arc for the Shadow across the two books, with the Shadow slowly discovering his humanity over twelve issues.  I do feel that they don’t quite give the Shadow a reason to come to terms with his place in the world.   The Shadow essentially tells Khan, “well.. I’ve thought about it, and I’m good with who I am now”.  Nothing really happens to the Shadow to change his perspective on things, and as brutal as the torture that Khan subjects him to is, I don’t think its enough to give the Shadow more purpose.  The Shadow’s arc seems like its missing one more element to get him to a better place, like if the Shadow had some sort of astral/near death conversation with Margo’s spirit, for instance.

This final issue is fairly by the numbers in turns of how everything plays out.  Both characters deal with their respective baddies for the most part.  Batman isn’t really given a lot to do with this issue.  The subplot about Batman possibly being a reanimated corpse controlled by Khan is utterly ignored.  It seems like that ended earlier the series with “um… Khan was lying.. moving on..” which frankly is a little lazy.  It’s as if they wanted the moment for a cliffhanger between issues but then didn’t want to explore or address the idea, at all, in the remainder of the story. If that is the case, then the story shouldn’t have had that element in it, to begin with.  It also would have been nice for Batman and Robin to have a father-son moment at the end of the story to bookend the conflict they have at the beginning and it’s a shame the creators didn’t make time for that.

I do like the idea of Robin releasing all this withheld technology which seems to turn New York City into Back to the Future Part II’s Hill Valley of the Future (2015).  Its an interesting concept and I would gladly read another book dealing with the fallout what happens when technology takes a quantum leap in a society.

Artist Giovanni Timpano wraps up the series with style.  I’ve really enjoyed the art throughout this series.  The sequences on the Thaumic Plane give Timpano a chance to be let off the chain and there is a sort of grotesque beauty to these sequences.  I truly hope this isn’t the last time Timpano gets to play with Batman and his world.

Final Thoughts: This series started out strong but didn’t quite stick the landing for me in its final issue. It was still an enjoyable read and I’m sorry to see this story end.