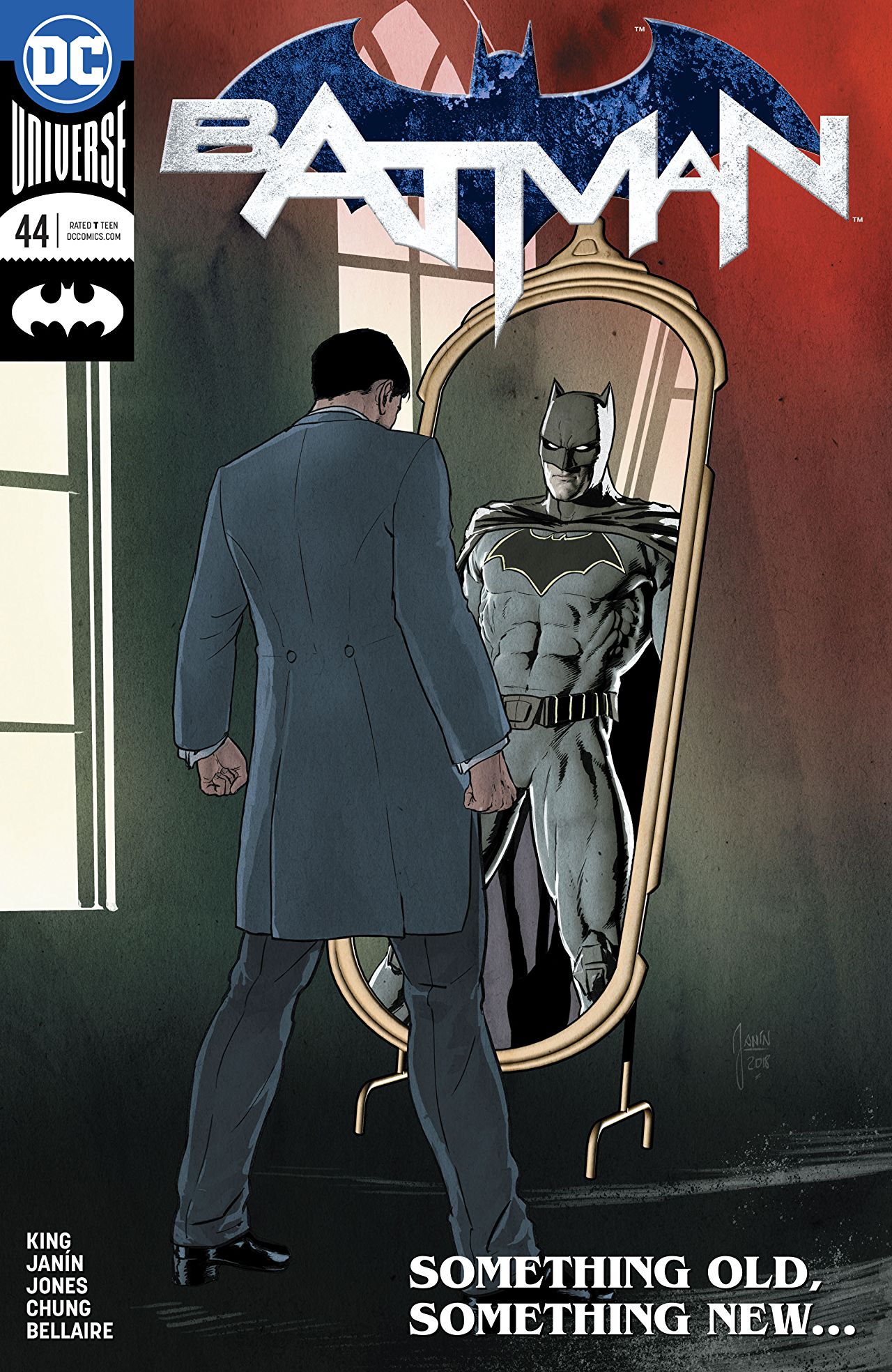 Synopsis (spoilers ahead): 2:37 a.m. – Selina lays next to Bruce, unable to sleep. In less than an hour, she suits up and hits the town.

We flashback to an unspecified time. Batman is wrapping Selina’s ankle. She lets him know that she knows when she’s been caught. Selina is wearing a green dress that she wore in her first appearance in 1940. Batman also calls her Cat like he always does when King writes to the two, but it takes on a new meaning with her moniker at the time just being Cat as opposed to Catwoman. Batman is wearing his classic grey with blue trimming and solid black bat-symbol.

3:54 a.m. – Selina emerges from the sewers and places a pack of C4 on the tunnel ceiling. She dives back down and blows a hole in the structure.

Again, we flashback to comics era 1947, with Selina wearing a purple dress with a mask and green cape. Batman is chasing her when a nearby wall begins to collapse. Selina talks about how she’ll be able to escape now, but has a change of heart and jumps in front of Batman, taking a brick to the head. Robin (Dick) notes of how she saved Batman. Batman seems to have the same costume, but Dick is wearing his New 52 Robin suit.

3:58 a.m. – Inside a wedding dress shop, the floor collapses and Selina emerges.

In the past, we see Batman talking with Selina. He apologizes for the newspaper article that came out about her but assures her that he had nothing to do with it. He tells her that there is no future for Catwoman, but she seems to resist the idea of changing who she is. She is just wearing a red dress this time. And Batman seems to have the same suit. The only possible change could be his utility belt, but it’s hard to tell.

4:15 a.m. – Selina strips down and makes herself comfortable inside the store.

In another flashback, we see Catwoman getting the upper hand over Batman. She’s tormenting him using sound waves while demanding an answer from him; “Bride or burglar?” (Or as most married men would say a typical Tuesday night) Here Selina is wearing her television show inspired suit from 1967, however, to prevent confusion with Batgirl’s costume it is colored green. Batman’s suit remains essentially the same.

In yet another flashback Batman is riding horseback in a chase after Catwoman, who is riding a white Bengal tiger. Here, she is wearing a costume from 1974, which wouldn’t look out of place in the circus. The two comment on how she is always “stubborn” or “proud and independent”, depending on who you ask. It’s hard to see Batman’s suit, so it’s hard to say if there is a change.

5:01 a.m. – Selina is now trying on dresses, but they either fit wrong, or she doesn’t like how they look on her.

We cut to Batman and Catwoman in a fist fight. Catwoman hates Batman for how her life has turned out. She is back in her purple costume with the green cape, which reappeared in 1975 although this scene is a reference from 1983. Batman also seems to be wearing a suit from this era, as he has a more stylized belt, and the yellow oval on his chest.

5:36 a.m. – Selina cracks open the fridge and pulls out a bottle of champagne. She begins to drink out of the bottle, as she takes a break and just looks at the dresses.

Batman and Catwoman are perched on a rooftop. Batman asks her why they are drifting apart. He asks her what is wrong. She states “nothing” as tears run down her face and then changes her answer to “everything,” as the bat signal appears in the sky. He wears the same suit as described in the last scene, except this time we know there are trunks to go with it. Catwoman is in her purple costume.

6:26 a.m. – Selina is stumbles across one that’s very different than the others. Lace, expensive, and it comes in black.

In the cave, Batman tells Catwoman that they are through. Selina begs to differ, kisses him, and then tells him that they are done. They are both in their New 52 looks.

Bruce and Selina are out on patrol together, possibly right before Selina went dress shopping. They exchange words about how their costumes have changed over the years but how they are both looking for something that fits perfectly.

7:34 a.m. – Dawn has come, but Bruce is still in bed. Selina sneaks her dress into a closet as Alfred catches her, but she motions to him to keep quiet. He smiles at her. She sneaks back into bed with Bruce, and at 7:46 a.m. she falls asleep.

Analysis: Something old: the flashbacks of how things used to be. Something new: Batman and Catwoman’s current advancing relationship. Something borrowed: the dress. (It’s not stealing if you bring it back. – the voice inside Selina’s head). Something blue: I’m not sure on this one. My guess would be either Batman’s throwback costumes, or the night itself, or maybe it has yet to reveal itself.

Tom King delivers an excellent script here. I feel like few writers in the industry can write a better single issue story as well as Tom King can. His ability to compress the story and bring out key moments in a very structured manner is amazing to me. He does an amazing job splitting up the work seamlessly between two different artists. The way he can tell a story about someone without using any dialogue blows my mind. In this book, Selina really does remind me of my wife in terms of her personality, which could also be a major credit to Joelle Jones’ storytelling. King also manages to cater to the old fans with all the different suit changes. Now I’m a newer reader, but even I found those different costumes endearing.

Mikel Janin’s art is beautiful. Again the references to older costumes were awesome, but I was thrown if by the lack of trunks at the beginning, as well as Robin’s weird New 52 look. I really don’t like that costume. The style and time he brought to the book were also neat to see. His more plain backgrounds in the early flashbacks immediately implied the timeline in my mind. I really appreciated the minor touches brought to this book. June Chung had to have fun with all the different costumes, settings, and eras. She did a great job, as always. Her style matches up with Janin extremely well.

Joelle Jones might be my favorite thing to happen to Batman in the past year. The expressions and body language alone are more storytelling than most artists are able to do, but then she does an issue without any dialogue. That’s just insane. Jordie Bellaire’s colors are simple, yet elegant. The night scenes made for lots of solid blue pages, but the simplicity works here. She colors just enough to keep the page engaging and hold your attention without you knowing. Jordie’s a beast.

Clayton Cowels does a fine job lettering here, however, I did have trouble with his choice for the timestamps. The fours in particular looked like nines to me, but I knew that wasn’t right, because of the previous time.

Final Thoughts: This book continues to entertain me. I loved the guts that it took to do a full character issue on Selina as we approach her wedding, all without her even saying a word.