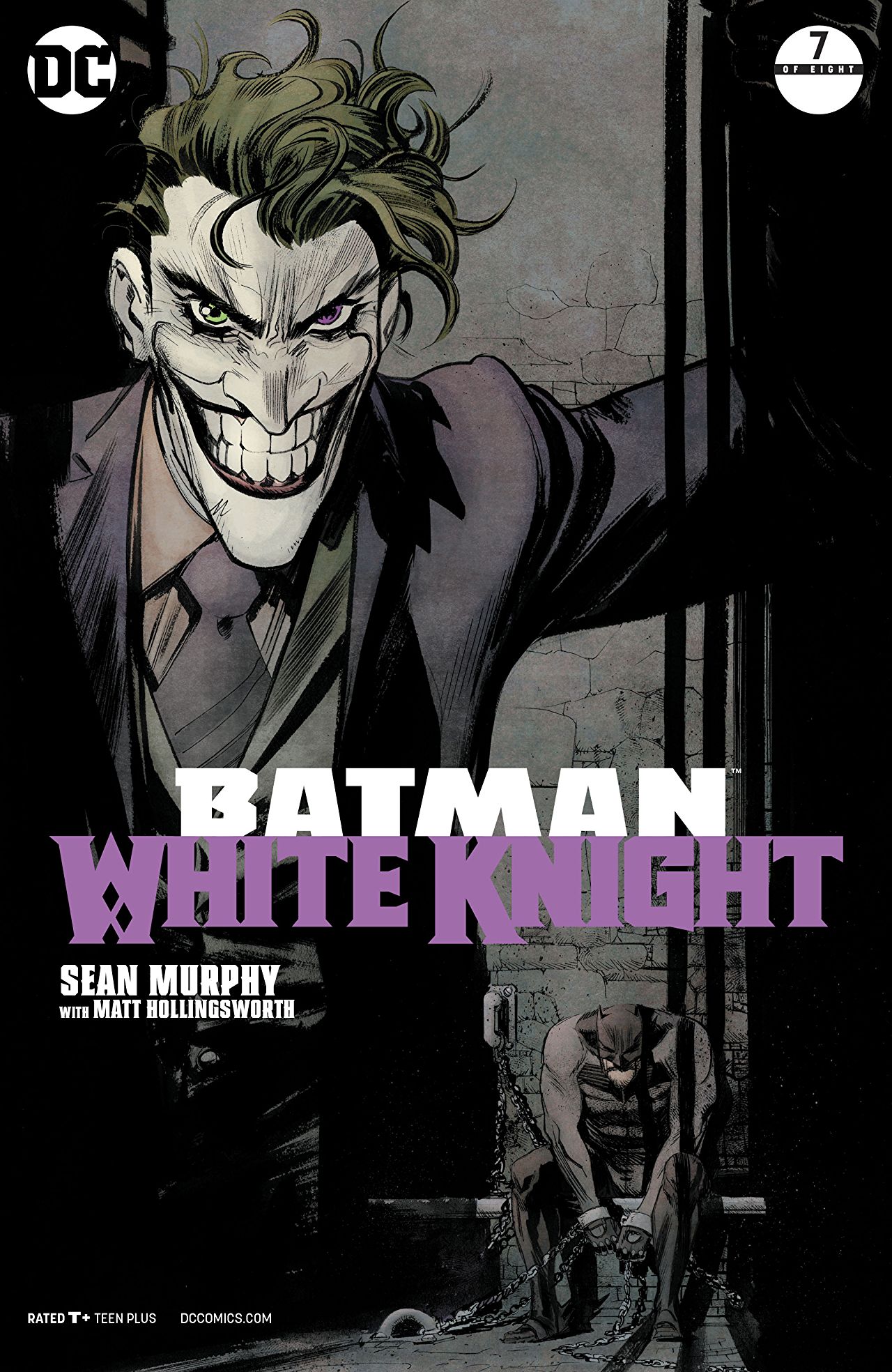 Overview: Everyone appears to have picked a side and is ready for what promises to be the final battle. But with Jack’s control over the buried Joker persona getting weaker by the minute, there may still be a few surprises left in store.

Synopsis (spoilers ahead): The Joker makes a brief appearance as Jack briefly loses control due to his medication starting to lose effect. The GTO and Jack decide to go ahead with their plan to stall and then defeat Neo Joker. Batgirl and Nightwing visit Batman’s cell in Arkham. Batman tells them that he has finally figured things out and that he is waiting for Harley to send Joker to see him. Gordon, Harley, and Jack take the Batmobile to parley with Neo-Joker and her mind controlled villains. Jack agrees to bring back the Joker if it will stop Neo Joker from destroying Gotham. Jack ventures outside to share a private conversation with Harley. He expresses disappointment that his plan to save Gotham didn’t really work in the end. Harley convinces him to do the one thing Joker would never do and that Neo Joker would never expect; work with Batman.

Jack pays a visit to Batman’s cell in Arkham and he convinces Batman to work with him in exchange for a full confession about everything Jack has done over the past year. Jack also stipulates that Harley must go free and Batman agrees with the sole condition that Jack tells him what happened to Robin. Jack explains that Joker is blocking the memory, but Batman helps guide Jack through a meditative state to recover the memory. Jack reveals that Jason is alive but that he hates Batman so much he let him think he was dead. Jack also reveals that he knew Batman’s true identity long before he uncovered the memory because the Batman Devastation Fund was completely covered by companies owned by Bruce Wayne.

Batman takes Jack to visit the lab where Victor is keeping his bedridden wife. Victor tells them about the network of tunnels running underneath Gotham City that Thomas Wayne used to transport building supplies and medical equipment. Batman deduces that Neo Joker stole the map of those tunnels. Jack returns to the GTO with that intel and they plan an attack where seven Batmobiles are to use the seven tunnels to simultaneously attack Neo Joker. Jack also takes the GTO members in the garage to reveal Batman and a fleet of his Batmobiles ready to help. The thought of Jack and Batman working together, at last, is too enticing for the Joker to resist and he resurfaces briefly before Harley and Batman help Jack get it under control.

Batman, Nightwing, and Batgirl have a private conversation about the unread note Alfred left Bruce before he died and about what Bruce wants for the two of them. They share a group hug before joining the rest of the GTO in the Batmobiles. Batman tells Gordon that he was right and that, after tonight, he will take off the mask and tell Gotham the truth about Batman. As the Batmobiles hurtle towards their objective, Gordon reiterates the plan to get the freeze cannon. As Batman’s Batmobile approaches the tunnel, the Joker makes another impromptu appearance.

Analysis: Wow, what an incredible issue. I’ve really been enjoying how Murphy explores Jack’s struggle to suppress his Joker persona. Jack loses control a few times in this issue, but he’s clearly trying to be a good man and doesn’t want to let his dark side win. Harley isn’t relegated to the sidelines either, as she is the one who convinces Jack to approach Batman to ask for help. Given Harley’s conversation with Batman on the rooftop in issue #5, Batman making reference to it in this issue by saying he figured out what’s going on, and Batman telling Jack that Harley is more involved than he thinks; it’s hard not to suspect that Harley is the real mastermind in this story. If we go back to issue #1, we see that it was Harley who instigated the subsequent events by recording and publicizing video of Batman beating up Joker. I suspect her goal is to end the cycle of violence and the eternal struggle between Batman and Joker by convincing them that they aren’t so different in the end. Of course, she also wants Jack to overcome the Joker for good. This is really highlighted in the conversation she has with Jack out in the snow.

Batman first appears to be uncompromising towards Jack, but as they continue to talk, he seems to relent somewhat and acknowledge Jack’s humanity. He witnesses first hand the struggle Jack has with having the Joker in his head and helps him seize control of his memories from the Joker. The art on the page where Jack is remembering what happened to Robin is absolutely outstanding. The Joker is depicted as this oversized creature of malevolence and chaos. The wild look in his eyes and the blood on his hands as he handles the switchblade and literally holds Robin’s fate in his palms reminds us in a very visceral way why the Joker is the apex villain in Gotham. The fact that the Joker let Jason go when he got the information he wanted doesn’t make him seem any less villainous to me. Letting Jason live because it was more “fun” for Jason and Bruce to live with the trauma of that night is arguably more sadistic than outright killing him.

There is another big revelation in this conversation as we finally get confirmation that Bruce was replenishing the Batman Devastation Fund with money from his own companies. Previously, we had been led to believe that Gotham’s taxpayers were paying for all the collateral damage incurred by Batman’s crusade. Bruce has always used his company to pay for damages in the main continuity, but for the first time, we had to consider a version of Batman that did not feel the same sense of responsibility. While I’ve been interested in the more morally ambiguous Batman we’ve got in this story, I’m glad to see that he still retains some altruistic qualities that make him recognizable as the hero we know.

On that note, I have to say that Batman is a more relatable and empathetic figure in this issue than he has been at any point in the story prior. We see him at his lowest point after being arrested, beaten and thrown in Arkham. However, he reassesses the situation and realizes that he has to adapt and change to save the city he loves. He shows compassion towards Victor and has an extremely heartfelt conversation with Nightwing and Batgirl. His words reflect a man who is thinking about his place in the world and the kind of legacy he wants to leave. He owns his mistakes, admits his darkness and explains that he tries to not let it affect those around him. He refocuses on his motivations for why he fights. I feel like Murphy is showing us that even heroes and good people can lose their way sometimes, but the important thing is to always come back and remember who you are. Conversely, with Jack, I also feel like he’s trying to say that not everyone is lost forever. People have their personal battles to fight within themselves, and sometimes they’ll lose, but the important thing to do is to keep fighting to be good. I’ve enjoyed the exploration of political and social issues in this story, but I didn’t expect the emotional side to be so riveting. It’s definitely been a pleasant surprise.

I’ve already made some comments on the art with regard to Joker, but there are many more panels worth mentioning. As usual, Murphy does stellar work in rendering vehicles. Seeing all the Batmobiles in perfect detail in the GTO garage and then later on racing down Gotham streets is delightful. As a Batman fan, it is so cool to see over half a century of Batman history being honored like that. There’s also a subtle panel where Jack hands Batman his cape and keys at Arkham. If you look closely, it appears like the key is a cross. That, coupled with the fact that Batman’s cape has a collar in this story, made me think it was hinting at Batman being a kind of religious figure who would be on his way to exorcise the demons that plague Gotham City. I don’t know if that was intentional, or if I even interpreted it correctly, but it’s worth mentioning. Hollingsworth’s colors are fantastic in this issue. It continues to amaze me how he is able to compliment Murphy’s art so beautifully without using tons of different colors.

Final Thoughts: One of the best issues in the series thus far. I highly recommend this book to any comic book fan. The next issue will sadly be the final issue of this story. Feel free to sound off in the comments or on Twitter about your thoughts on this story and any predictions for the final issue.