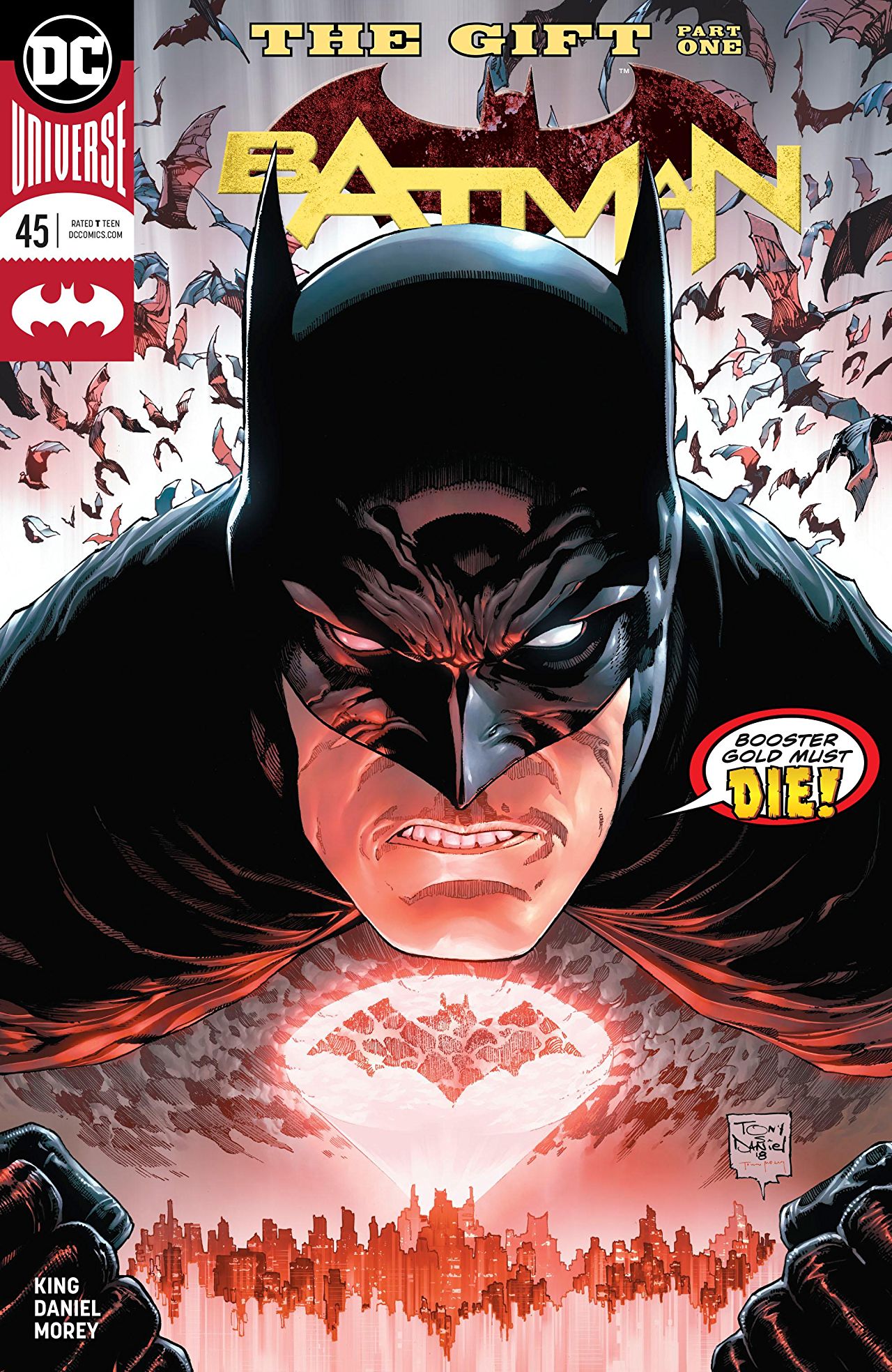 Overview: Booster Gold gets Batman a wedding gift and it backfires on everyone.

Synopsis (spoilers ahead): With a city on fire behind him, Hal Jordan approaches. He talks about how his ring has a safety feature that prevents him from harming himself. However, with enough willpower, he can override this feature. As a grin appears on his face, he puts the ring against his head; “Do you dare me? Yeah, you dare me.” BLAM! Hal’s body crumples on the rooftop. Booster Gold cleans the blood off his goggles. ‘That was intense… and awesome! Well, time to go find Batman.’

Skeets (Booster’s flying done companion) tells Booster that this is the first thing he had ever done. Booster tells him ‘not by a longshot… but just in case, they still better find Batman.’

Tim Drake sits in the computer room at school. His teacher tells the class of how he saw a Joker stab a woman in the face on his way to work that morning. He was going to shoot him, but another man beat him to it. Another lady got shot in the crossfire, probably by accident. He thinks President Cobblepot is right, though. If he was allowed to run this place the way Ghul rules Eurasia, then it’d be a better place.

Booster arrives on the GCPD rooftop but finds that the bat-signal has been destroyed. He emits light using his suit, creating a makeshift signal. He and Skeets bicker as they wait for Batman to show up, when; BANG! Booster is shot in the back. Skeets informs him that Batman is here… He’s also the one who shot Booster. “Move and die.”

Booster holds up his finger, signaling to pause, and Batman unloads on him. Booster’s energy field deflects the bullets, but a blast from a grenade sends him hurdling on the rooftop.

We interrupt this program to bring you a word from our sponsors: Jason Todd – ‘Are you tired of parking your car, only to come back and find some Joker stealing your tires? Well, stop those jokes before they get you with my game-changing invention — the Todd-tire-taze! With new and improved joke killing tazing ability! Get yours today at Jason Todd Tires!

Booster and Skeets argue and bicker some more as Booster recovers from the fall from the rooftop into the alley below. Batman drops a noose that catches Booster and pulls him up to a gargoyle perched on a rooftop. Batman explains that because he is a superhero in Gotham, he could get Jokerized, so he’s going to have to kill him before that happens. Booster keeps trying to tell him that he got Batman a gift, but it’s hard to talk through choking. Batman wants to know who else is coming before he puts him down, though. That way he can be ready for them. Skeets does a facial scan and realizes that it’s not Bruce Wayne at all. It’s Dick Grayson. Dick panics, wondering how they know who he is and tries to shoot them with his pistol.

BANG! Booster gets loose and flies away. ‘You know, because I’m from the future, I know who Batman is, so instead of looking for Batman, we should look for Bruce Wayne.’ ‘You’re right Booster, you’re so smart.’ ‘I am, aren’t I?’ ‘No.’

We cut to Duke Thomas, who’s not looking so good. He is being fed by someone and it’s clear that he had brain surgery recently. Someone (presumably his mother) tells him that they’ll figure out this Joker problem.

We head to Wayne Manor, where they are celebrating Bruce’s birthday. He is dancing with his mother. CRASH! Booster Gold and Skeets crash through the window of the mansion. “Hey, Bruce Wayne! I got you a present!”

CLANG! Talia clashes her sword against her father’s as they practice. ‘No, father, there is no worthy man. I will one day take your place on the demons throne and rule over Eurasia as you do now. And once our Joker is done, we will have the Americas as well. But I will be the last in our line. There is no heir.’

Booster is attempting to explain his convoluted wedding gift to Bruce. ‘I remembered this story of Supes, where he got trapped inside his mind. It became a what-if scenario where his world never died, but his life wasn’t as fulfilling as the one he had in the real world, and it made him appreciate it more. So I thought we could do that for you by stopping the murder of your parents but then the world goes to crap. So when you are ready, just let us know and Skeets can go back in time, and let your parents die, and things can go back to normal. Bruce seems to take this in stride. Deep down, he always knew this would happen.

SNNKKK! Bruce takes a fireplace poker and plunges it into Skeets. ‘It’s easy to get lost inside a mansion, so I’ll send my butler in to show you the way out. It’s my parents anniversary and I wouldn’t miss it for the world.’

Analysis: Tom King does an excellent job introducing you to a new world. He drops you in, gives you something familiar, and then immediately lets you know that something isn’t right. The unsettling nature of this story was well done. I really enjoy the Elseworlds, because they are true character studies. This almost works as an Elseworlds inside the main series itself. Kind of reminds me of Geoff Johns Titans of Tomorrow story.

Exploring this world through the eyes of Booster Gold was a nice change of pace. Some may have a problem with him leading the way in what’s supposed to be a Batman comic but getting to know Booster Gold better made for an interesting read.

Again, many will disapprove of Batman – heck, Dick even – using firearms and explosives in a way that would make the Punisher proud but I’ve never really understood Batman’s anti-gun stance. The one that makes the most sense to me is Frank Miller’s Dark Knight Returns, in which he says they are “loud and clumsy”.

This version of Batman intrigues me. How did Dick get like this? How did he take on the mantle of the Bat? I’d love to see this world explored more, but I doubt we will get all of our questions answered before the end of the arc.

I’m a little confused when it comes to the party. At first, it’s Bruce’s birthday, then, pages later, Bruce says that it’s his parents anniversary. Was that a mix-up? Did King not decide which one to go with and then accidentally go with both? Or did Bruce just happen to be born on the anniversary of his parent’s wedding? If so, that’s kinda cool.

Another thing I found cool, was how the comic seemed to be chopped up using onomatopeias, (which is why I placed them into my review) as a way to transition in some way. Also, the comparison one can draw between the decision Superman makes in the story Booster tells and the decision Bruce makes, opens another can of worms that could be dissected and debated for quite some time.

Tony Daniel does an excellent job here. His storytelling was on point. The opening scene, for instance, was very creepy. The subtle smile appearing on Hal’s face foreshadowing what was to come was a nice touch. His comedic timing was also amazing and something I don’t think we usually see from him. The part where Booster and Skeets are walking down the alleyway, bickering, and the noose picks him up without Skeets noticing was well done. Also, his design for Batman was amazing. If it were up to me, Batman would be rocking this look all the time: more militaristic, yet a rough (used) look with the long tattered cape. It was amazing to look at the detail on that thing. The only problem is Daniel’s consistency, especially with faces. In the ending scene, Bruce looked off in a panel or two. The perspective was off in his face. Wrong dimensions, if you will; words are hard.

John Livesay assists with inks, and because he helps throughout, instead of just a page or two, it helps maintain a consistent look throughout the comic, which was nice to see. Tomeu Morey’s colors are excellent. His sense of texture, in particular, is beautiful. Clothing and skin look soft, while metals are sleek and brushed looking. When something gets roughed up, the colors reflect that. Clayton Cowles letters this book and does an excellent job. The box placement was on point and his sounds throughout were well done. Also, I don’t know if this is King or Cowles, but thanks to them, I now know how to type out a fart sound.

Final Thoughts: An excellent Elseworlds tale that built up an interesting world that could get quite emotional for our hero to give up, sign me up!