Review: The Brave and the Bold: Batman and Wonder Woman #3 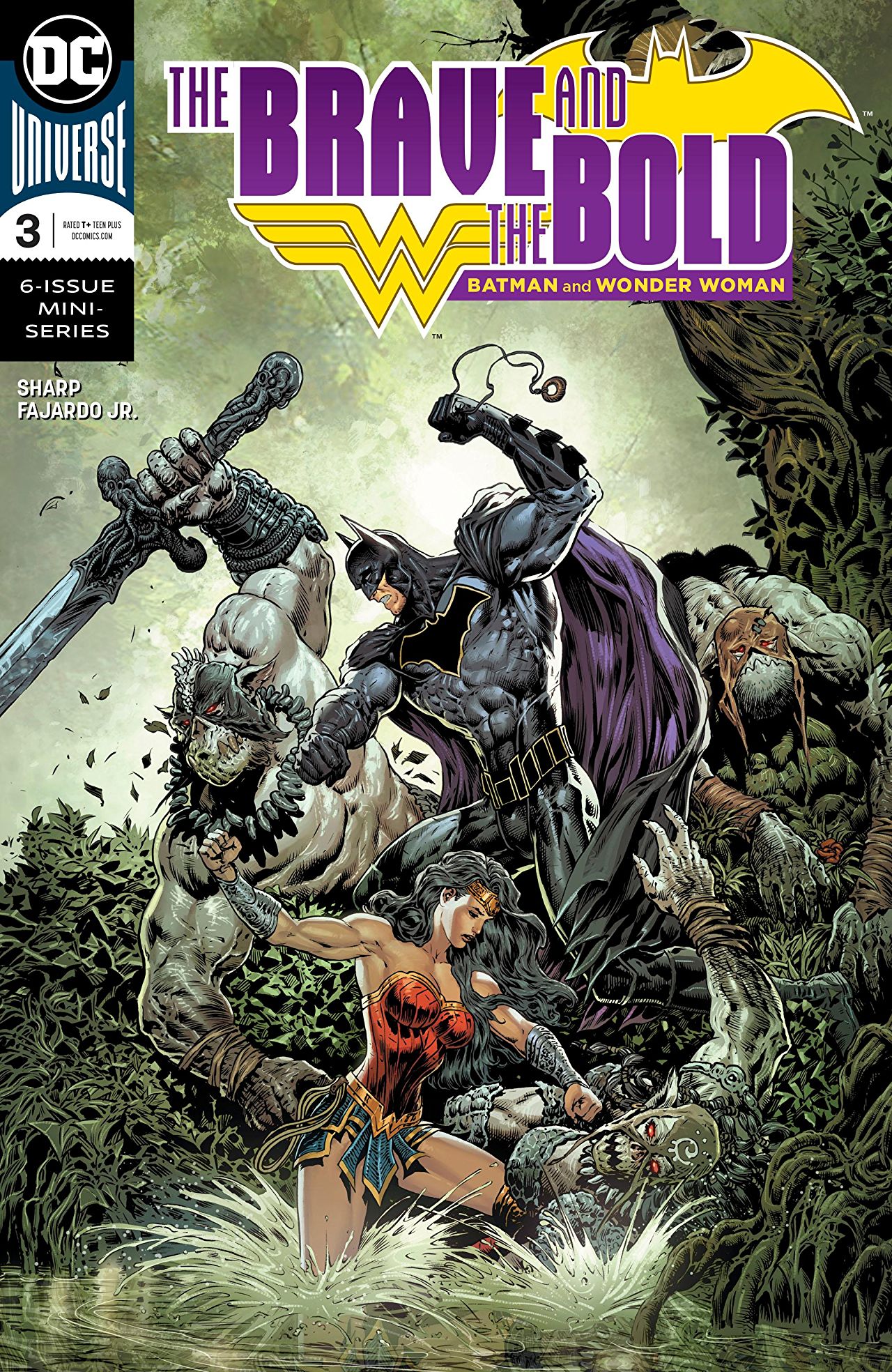 Synopsis (spoilers ahead): Three spirits awaken Bruce and ask him if he would want to take a bath since a natural hot spring is nearby. In a daze, Bruce climbs into the spring for a bath and moment of relaxation. Diana enters the cave and tells him that when he has “finished skinny-dipping” he needs to suit up.

On horseback, Diana and Bruce travel the countryside of Tír na nÓg admiring the natural beauty. Bruce comments that although the land is beautiful, it is too quiet – like the natives are hiding from them. Diana states that Cernunnos said that the Tuatha Dé Danann and the Fomorians swore an oath to remain in Tír na nÓg. They are natural enemies, and living in seclusion does not help foster a lasting peace.

Bruce discusses that in Gotham, he and Alfred were discussing the possibility to create a device that can detect magic. With time playing by different rules and other magical phenomena, Bruce needs a stream. Like us readers, Diana is completely confused by what he means by a “stream.” He explains that his process is based on logic and science; he needs evidence that can be scrutinized by the scientific method. He also tells her that he is not ignorant to the notion that although he uses his rational mind for problem-solving, his subliminal thought processes are crucial for putting things together and drawing new conclusions. He asks how he is able to solve something that is seemingly impossible. He realizes that he cannot use his normal methods for his case, he needs to know more of the lore. He will need to solve this case with his intuition and not his scientific mind.

He remembers that one of his nannies, Dora, told him an Irish fable. She told him that one can see through faerie magic if they find a rock with a natural hole in it. Diana and Bruce go to a stream, and among the rocks, Bruce finds the stone that he needs. With the rock, they notice multiple creatures following them. Diana reassures the creatures that they are not in danger; they came to investigate their king’s death. Bruce questions the group about whether King Elatha commanded their people to raid and set ablaze villages. After some back and forth, Bruce postulates whether the Tuatha Dé Danann did murder their king, or if the Fomorians killed him to restart the conflict between their respective peoples.

With that statement, Bruce and Diana are attacked for his “disrespectful” question. After finishing them off, she states that he was not very diplomatic and the situation could be handled differently. He admits that his methods were effective despite the scuffle: they now know although King Elatha seemed disengaged with his people, he was extremely capable and clever. Bruce questions Elatha’s fake aloofness and why he stayed in that state when he wanted social change. Bruce deduces that the raids were some type of distraction; there is some deeper plot lurking in the shadows. He also questions who stands the most to gain with his murder. Before he can continue, he needs to learn more about this place.

Diana takes him to the border of Tír na nÓg, and explains that it is alike Themyscira; they are both magical realms which are natural paradoxes.

Back at the Great Hall, Cernunnos, Diana, and Bruce discuss the case. Bruce admits that he has not solved the crime, and he needs to head back to Gotham. Cernunnos tells him that he is sad by his departure; when he first retrieved him, he realized that there is a breach between his city and Tír na nÓg. With this knowledge, Bruce sees this place and the nightmares in the Irish Quarter might be connected. Diana asks Cernunnos about the origin of the wall. He states that the wall is what it is. He shares that after so many spells to make them forget why they are here, they cannot remember why they made an oath to stay and imprison their worst enemies in this realm.

Diana and Bruce discuss what they have witnessed. He states that although there are these conflicts, that they are idle threats. After being stuck in this realm for thousands of years, these “skirmishes” are just games to keep them entertained. He comments that there are still too many mysteries that are unresolved. They need to find why these people have forgotten why they had locked themselves away in this realm. Diana wishes that there is something they can do to help these people. Bruce begrudgingly admits that there might be nothing they can do to help. “Nations die. Kings die. Everything has its time…”

Analysis: This miniseries reminds me of a Law and Order episode. Within the first twenty minutes of an episode, a crime occurred and now the detectives are gathering evidence and collecting witness testimonies. This issue is the “gathering the facts and testimonies” part. It seems that this issue is “weak” in comparison to the others, but do remember this is a murder mystery; investigations take time.

However, I do like seeing Bruce’s detective side. Too often in comics, we see him use all these crazy machines and inventions to solve crimes. But with him being in Tír na nÓg, his normal system of using science and logic is unusable. We get to see Bruce interrogate and push the creatures to their breaking point, forcing them to lose their cool and make them speak the truth. The contrast between diplomatic Diana and a cold Bruce is perfect; it highlights how each hero is different. Bruce is all about the truth in search for justice, while Diana is for constructing peace through de-escalation (if possible, although she loves a good fight).

In these reviews, I have to make sure to highlight the art: Liam Sharp is incredible! Three issues in and he has been consistently great! Nothing seems rushed. He stays true to the Celtic art style he used in the first issue; specifically, the first page is drawn in the same style as the Book of Kells. He expands the world of Tír na nÓg outside of the Great Hall, and it is so beautiful. You can clearly see all the time and love he puts into creating this beautiful art.

Final Thoughts: This is another solid issue. It is not as action packed or flashy as the previous two, but seeing Bruce be a detective is worth the slower pace.