Review: Batman: Creature of the Night #3 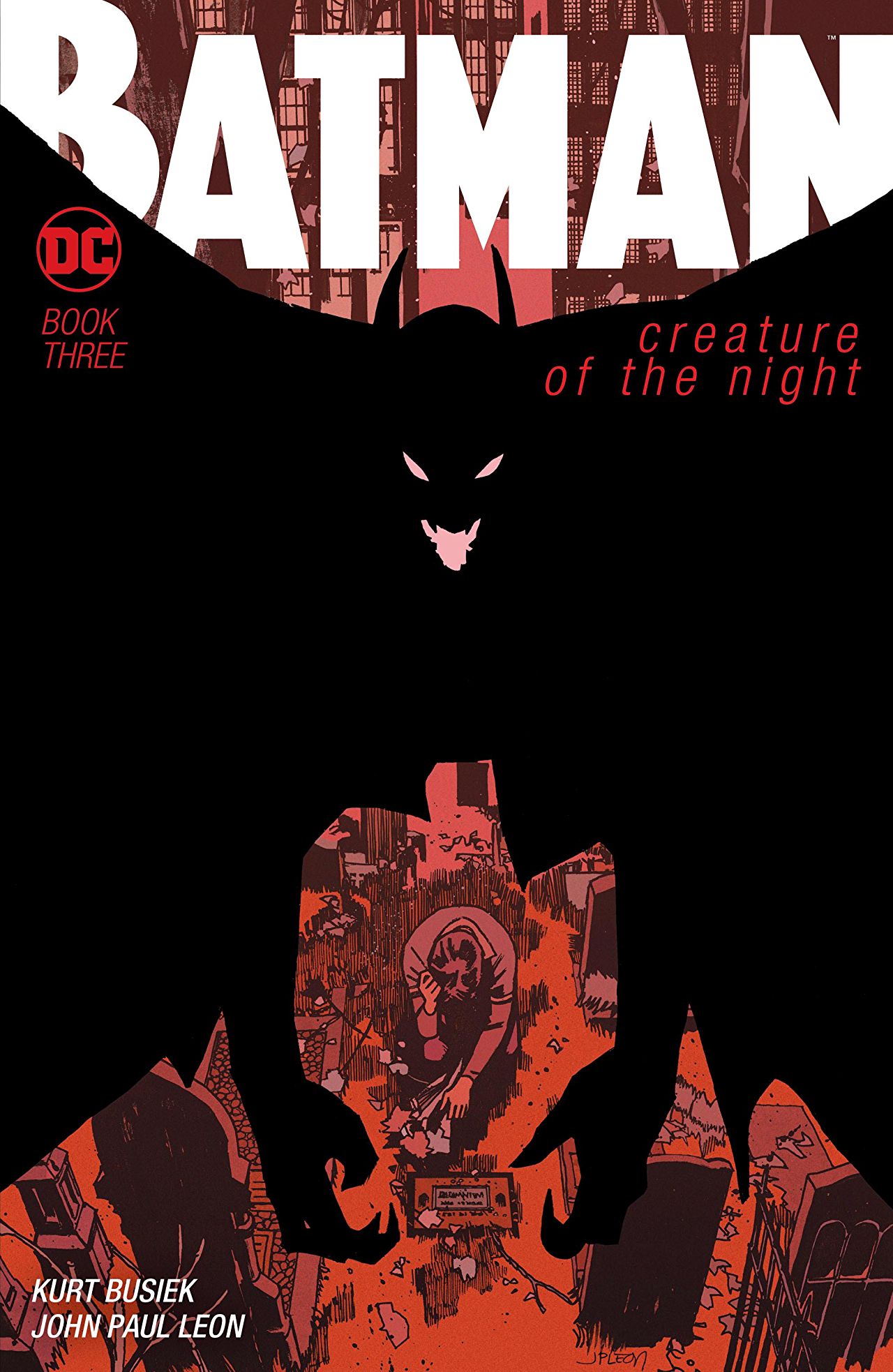 Synopsis (spoilers ahead): Uncle Alton (or Alfred if you will) is rummaging through the chaos of Bruce’s desk in his office, worried about his absence of late in Wainwright Investments businesses’. This is now the beginning of the 90’s, shortly after the release of Tim Burton’s Batman – which exists in this universe.

Meanwhile, the Bat is out on the streets, stopping a mugging from happening – not without getting his hands bloody. Bruce is mentally there with the creature, the grinding truth of how endless crime is slowly getting its toll on him. The police are hunting the creature now. Bruce, knowing the police believes him to have a connection with the Bat, is now keeping to open places whenever they go into action.

Since taking out the Hanrahan mob, Bruce and the Bat have gone into a cycle of gangs and mobs who take power one after another. Bruce has now realized that things in real life are not as simple as comics make them out to be.

The feeling of powerlessness leads him to try to summon the Bat while in the company of Robin and Alton, but the creature does not come. Bruce then searching for possible explanations for the creature. He is certain the Bat is supernatural, so he starts looking into mystical answers for its existence, but none of his options seem trustworthy. At a loss, Bruce decides to talk to Gordon. He ends up admitting that he has a connection with the Bat. Gordon remains adamant on his persecution of the Bat.

Bruce’s last resort is to go talk to his parents’ graves, looking for answers which are not there to be found. Except he finds one in the grave of his stillborn twin brother, Thomas. He latches onto that, believing Batman to be the spirit of his brother. To investigate his reasoning deeper, he seeks a specialist in occult studies, Dr. Katerina Nibisi, with the excuse that he is doing research for a novel. He has questions about spirits and twins and ghosts. Despite half of her explanations seeming to refute his theory, Bruce remains convinced that Batman is his brother.

On his way out of the professor’s office, Bruce is met by Gordon. The man has decided to use the Bat to his aid, so he starts giving Bruce information about criminals he can’t act against within the constraints of the law. Gordon never really understands how Bruce works with the Bat, but he’s willing to let that go as long as he can use the creature to his advantage. One day, he moves the stakes up and drops the name of a politician for the Bat to investigate. Jack Crowder.

While the Bat follows the man, Bruce enlists the help of Eddie, one of the people working in Wainwright Investments, to investigate Crowder. On the sidelines, Alton sees an improvement in Bruce’s spirits. He is elated, so much so he has the Bat take him for a flight around the city.

His investigation helps uncover some minor scandal in Crowder’s past, which then goes to the media, hurting his campaign. Eddie’s investigations though lead to a deeper, darker discovery: the mob bosses of Boston – the same Bruce had taken down in the past – conspired against Crowder to have their own candidate win the election. Bruce discloses the information he then gathers, but to no use. Crowder’s campaign had been hurt too much from the minor scandal revealed much earlier in the race, and the new information on his opponent got out much too late for it to have its full effect on people’s opinions.

The helplessness is back to Bruce’s mind and soul. The utter foolishness of trying to quell criminality only to have it spring at him from somewhere else. Taken to the extreme, Bruce’s feelings are now one and the same with the Bat.

Analysis: Creature of the Night, much like it’s predecessor Secret Identity, are peculiar books. This is undeniable. Distinctive is not only it being a Batman comic wherein Batman exists as both a comic character and a concept, but also it’s third nature of telling the history of Batman comics trough time. Kurt Busiek’s choice of constructing his storyline weaved together with the comic book eras, one for each chapter allows for Bruce Wayne’s arc to be similar to the evolution of the Batman character in the real world. After covering the Golden Age and the Silver Age, chapter three introduces us to the Bronze Age of Bruce Wayne. In Batman comics, this is the Neal/Neil age. Batman, the detective.

Chapter two dealt with playboy millionaire Bruce Wayne and his adventures. Silver age Batman. Chapter three introduces political themes as his world becomes more and more nuanced. The shades of grey added to this world become a source of conflict for a Batman who is, in Creature of the Night, the embodiment of an idèe fixe. He wants to keep Bruce safe, he wants to make the world fair. He does not dwell on nuances. The confrontations of Bruce’s story arc with this idèe fixe is a constant pressure that constantly moves both characters forward, an evolution witnessed not only in Busiek’s writing of them, but also in Todd Klein’s changing of fonts from chapter one to chapter two, and even more clearly in the way John Paul Leon depicts the creature.

Back in the first chapter, the creature was monster-like. A giant bat, almost ethereal, an embracing presence invoked by a child. The creature, by then, was only an idea taking shape. To keep him safe, to make things fair. As Bruce enters adulthood, the Bat starts to shrink in size. Yet he remains more bat than man, its presence being secondary in Bruce’s life throughout the second chapter. Bruce lets it have its way, a dangerous idea on the loose. Now, with Bruce keeping close to the creature, dedicating most of his time to it, it has become a true hybrid, a man-bat. It’s got the face of a man, no longer the nose of a bat; it’s got the size of a man, the solidness of a body, no longer the gigantic and ethereal nature of an idea taking shape. By the end of the chapter, we see it transform once more, even more into the bat-man. The change happens not only in the way the Bat gets depicted but also in Bruce. Chapter two was filled with smiling Bruces, his face fully lit, the shadows just enough to convey depth. For chapter three not only did he get a grungy stub – it taking place at the beginning of the 90’s -, but Leon is constantly keeping his face in the shadows, drowning it in his heavy, expressive brushstrokes. And so we’re led to the Modern Age with a fully formed Bat-man. The milestone that marked the transition between the Bronze and the Modern Age for Batman what The Dark Knight Return, by Frank Miller. As Creature of the Night makes its way to it, some of its elements start to show, most notably Robin. Her hair is now much similar to Carrie Kelley’s, and want it or not she is now thrown into Bruce Wayne’s life in a way she never was before. The chapter ends with her narration, in her own narration box which is much closer to Bruce’s than Alton’s ever was. The uncle narration, ever so present, becomes silent by the end, which might mean a thing or two for the chapter to come.

Another element that might be changing is the color palette. Leon has been using warm, yellowish tones for the Bruce scenes and cold, purplish tones for the Bat scenes – as Todd Klein goes for the opposite color scheme with his lettering, giving the starkest contrast as they use complementary colors. A very small number of panels in this chapter were colored in reddish tones, and this might be a new addition to the chapter to follow given how this one ends.

Still unmentioned but not to be neglected is the twin connection. The character of Dr. Katerina Nibisi plays a key role in neither confirming nor denying Bruce’s twin theory. By doing so, Busiek provides a possible yet implausible explanation for the creature while further cementing the idea of Bruce being obsessed with personifying the bat. The visits to Nibisi’s office are also a display of Leon’s dedication to making his storytelling as fluid as possible. In a talking scene, it is usual for artists to neglect body language. People gesticulate, pace around, look up and down when in conversation. What is often drawn is a boring back and forth of expressionless faces in square panels with no size variation and no background that repeat themselves until they bore the reader to death and kill the pacing of the story. Leon, here, he keeps the camera still. No back and forth. The moving elements are the people. He builds, thus, a quiet yet dynamic scene, where the characters interact with each other and the environment around them.

Final Thoughts: The climax of the storyline is now reached as the bat and the man become ever so close. With three masters of their art (Kurt Busiek, John Paul Leon, and Todd Klein) working together in perfect syntony, this book dives deep into the inner workings of Bruce Wayne’s mind as he goes through his Bronze Age, the detective era of Batman.