Review: Batman: Sins of the Father #3 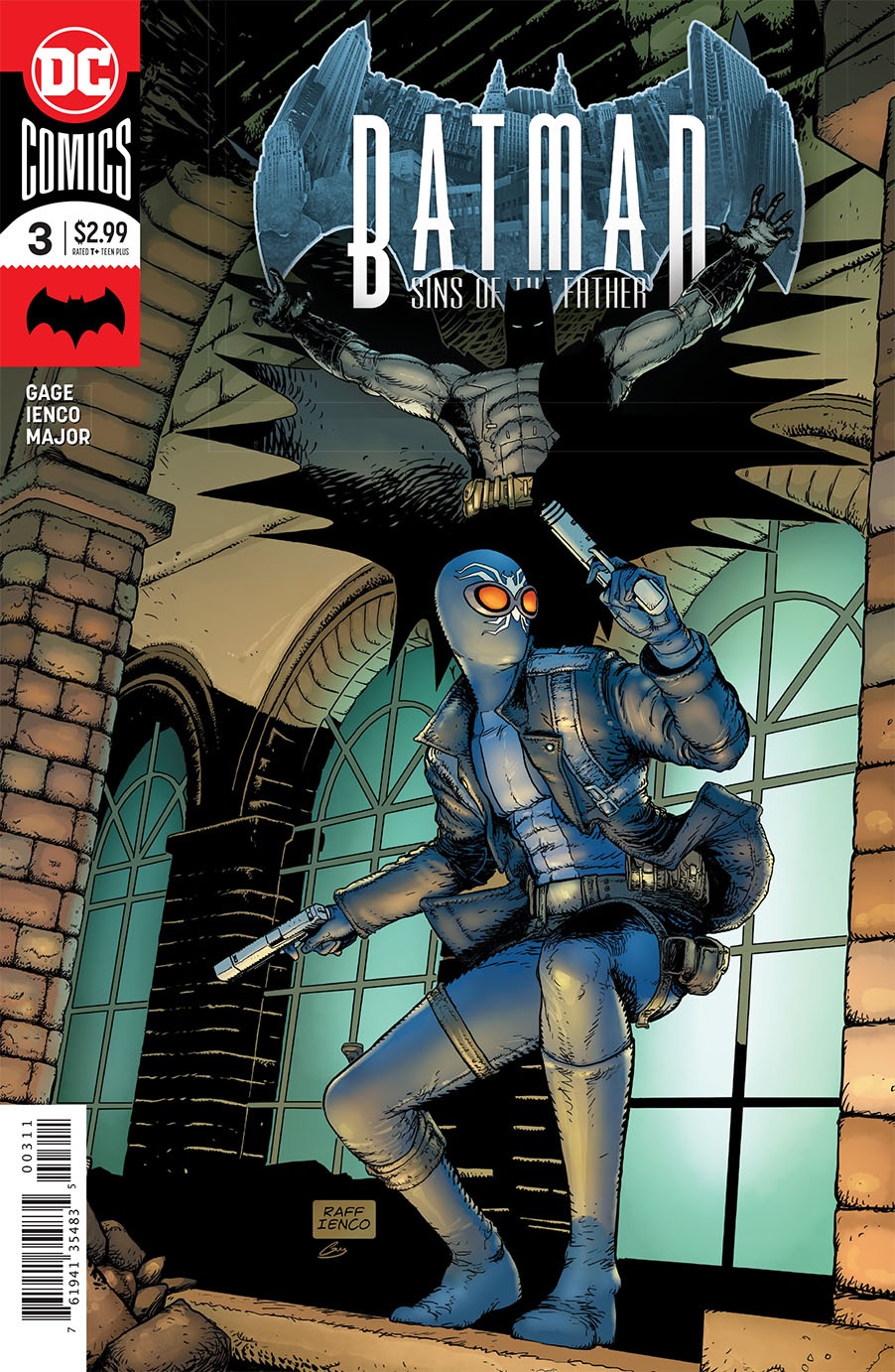 Overview: The tragic origin of Deadshot is revealed along with how Floyd Lawton is tied to Thomas Wayne and Arkham Asylum.

Synopsis (spoilers ahead): We begin where we left off last issue with Batman trying to break into Arkham Asylum. Alfred is worried about the new security of the facility Bruce is going to have a tough time getting through, but Batman has a plan that involves causing enough interference that the security guards think there is a glitch rather than an intruder. Batman is successful and makes his way inside with the guards none the wiser. Using several mirrored batarangs, Batman also makes short work of a laser-grid enabled hallway, allowing him to easily pass through. Finally, Batman uses a chemical agent in the air filtration system to harmlessly incapacitate any guards patrolling, giving him free access to his destination. Unfortunately, it looks like he’s not alone.

While Batman is looking at files in a storage room, Black Spider attacks, though Batman is ready for him and makes short work of the villain by first getting rid of his guns, and then defeating him in hand-to-hand combat. Bruce also mentions at this point his disdain for guns, keeping a character trait the classic comic book version exhibits. Batman leaves Black Spider under a bunch of file cabinets, telling Alfred that he has a lead on Deadshot.

Back in the Batcave, Bruce goes over his father’s M.O. when it came to dealing with those that got in his way. First, Thomas would offer money as a means to pay them off. If that didn’t work, Carmine Falcone would step in with threats of violence. These threats were never acted upon as Thomas Wayne knew he couldn’t have prominent Gotham citizens murdered. If Falcone’s threats failed, the mayor would send the police to arrest the person, usually on false charges such as disturbing the peace. Once arrested, they would be deemed a danger to themselves and put in Arkham where they became the victims of Thomas’ experiments. There were instances when someone would be released from Arkham after they vowed to give Thomas Wayne what he wanted.

This leads to Deadshot, who Batman believes is not seeking revenge because his father had a family member of Deadshot’s put away in Arkham. It’s that he let them back out. It turns out Floyd Lawton was the victim of a series of tragedies that befell his family. His brother broke his neck falling down the stairs while his mother ended up shooting her husband and herself, leaving Floyd an orphan similar to Bruce Wayne. It turns out that Lawton’s parents were both admitted to Arkham but released by Thomas as model parents after which they sold Thomas the building that would become Wayne Tower. Shortly after, Floyd’s brother suffered the fall that killed him, though it may not have been completely accidental.

The murder-suicide of Lawton’s parents was also suspicious, with Bruce deducing that Lawton was actually behind their murders as a means of revenge for their hand in the death of his brother. Killing his parents wasn’t enough as Lawton blames Thomas Wayne and his co-conspirators for allowing the release of the Lawtons from Arkham. With the wealth he gained from the death of his parents, Lawton was able to funnel the money into military contracting while also building up an arsenal of his own.

Batman compares his own origin with that of Lawton’s, and while he doesn’t have hard evidence that Lawton is tied to the shooting at Wayne Tower, Batman hunts Lawton down to just make him aware of his presence, to have Lawton know that Batman knows who he truly is. The problem is that Lawton is not afraid of Batman, so Bruce decides if he can’t get Floyd to talk as Batman, he can give him someone else. The son of Thomas Wayne. The issue ends with Bruce going to the Lawton estate and suggesting the two of them have a talk.

Analysis: This issue was really big on exposition, with most of the story being told through Bruce’s conversations with Alfred or by his own inner monologue. For the most part, it worked as we are given a new origin story for Deadshot that weaves its way into the Batman Telltale universe. What was perhaps most interesting is how similar the origins of Floyd Lawton and Bruce Wayne are, and how closely they’re tied together. While Bruce learned later in life that his father was not the man he thought he was, Lawton knew his parents were not good people, and it was through Thomas Wayne’s actions that Lawton’s parents were able to come home to further abuse and eventually kill his own brother. Though rather than an out-of-control tragedy befalling Lawton afterward, he took fate into his own hands and murdered his parents, essentially setting him on the mirror-image path Bruce was set on, with one believing his parents to be good people and the other knowing his parents were not. It’s the extra wrinkle in Batman’s origin of his father’s criminal ties that makes their dichotomy all the more interesting.

As I stated earlier, this issue was very wordy, with Christos Gage’s script being front and center. The issue allowed for an origin story to be told while also pushing the narrative forward so we are genuinely interested in what comes next. It helped that there were two fight scenes to break up the exposition, though the fight with Black Spider seemingly came out of nowhere and really didn’t have much of an impact on the rest of the story aside from having Batman engage in a fight at Arkham that wasn’t with the guards.

The art of Raffaele Ienco continues to impress; his fight choreography evens makes the superfluous fights stand out and feel really visceral. He could have easily taken the back seat this issue and rely heavily on Gage’s script but each image complimented the story and really added to the tragic backstory of Lawton as well enhanced the differences to how Floyd trained and overcame his upbringing to how Bruce did in much the same way. My only issue with the art is that Lawton himself looks almost generic, but then again Lawton as a generic every man could serve to highlight how Bruce himself is just a generic rich boy.

Final Thoughts: An exposition-heavy issue still manages to engage as it connects Deadshot and Batman by, appropriately enough, the sins of their fathers.