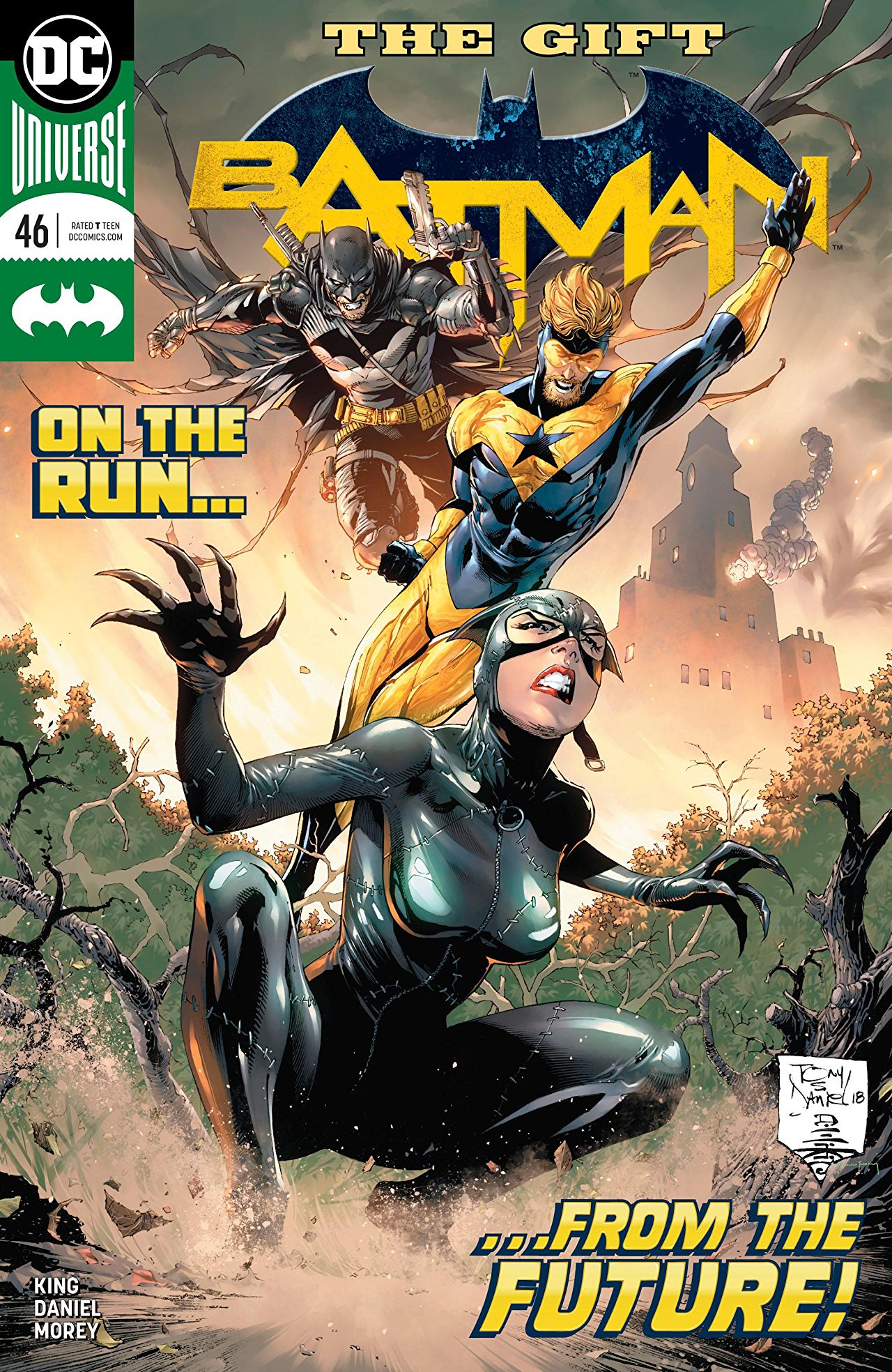 Overview: A year passes in the alternate timeline and Booster Gold totally fixes things this time.

Synopsis (spoilers ahead): A year has passed and Gotham City is still on fire. An exterior wall of Arkham Asylum blows open. A bearded Booster Gold asks a straightjacket bound Selina Kyle to help him save the world. She meows.

Thomas and Bruce Wayne watch the city plunge into chaos from Wayne Tower. Thomas knows exactly how this will all play out; Batman will go after Catwoman, Cobblepot will turn to Ghul for help and he’ll send his forces in. All the efforts that he has put into this city, all the money to help make things better, and it didn’t do a thing. He knows Bruce doesn’t remember what things were like before, but when he was a kid, Gotham was a paradise. Thomas struggles, clutches his chest and falls to the ground.

Elsewhere, Booster is reaffirming his plan in front of Selina; how when he introduces Selina to Bruce, he’ll realize how much he loves her and then things can go back to normal. Selina looks at him and meows.

Bruce cries alone in a chapel, praying to God that he save his father. Meanwhile, Booster is on a rooftop, talking about how he learned how to sew. How, in this timeline, his best friend (the one who showed him how) is dead. Selina meows again, revealing her Michelle Pfeiffer inspired costume. We then go back to Bruce, who has now joined his mother in the hospital. A doctor comes up to them and tells them that Thomas is going to be fine.

Selina stands outside an apartment, about to smoke, when Batman begins raining bullets down on her. Booster protects her with a shield, and once he blasts Batman backwards, he flies off with Selina in his arms. He is just going to bring her to Bruce at the mansion.

The Wayne’s are all back at home. Thomas is still upset about the state of the city, but Bruce is just happy that he’s alive. Until Booster and Selina bust through the door. Selina bolts through the hallway and slices up Alfred. She immediately moves on to Thomas, but takes her time with him. Then Batman shows up and shoots her in the back. He then turns to Booster and tosses a grenade at him, but thanks to his suit protecting him, it only knocks him out. Batman then goes to finish off Selina, but she slices off his fingers before he can pull the trigger. Using his other hand, Batman pulls out another gun and shoots her again, but this time it kills her. However, as the bullet exited Selina, it pierces Martha, killing her too. In retaliation, Bruce shoots Batman through the eye and then screams up at God as his parents, surrogate son, and wife-to-be (the latter two in the main reality only) die around him.

Analysis: Say what you will about Tom King, but the guy definitely knows how to grab your attention. I love the world-building that he does here, but I don’t necessarily care for the tone. It’s extremely bleak. And I know King is trying to show us the world in which Bruce doesn’t become Batman, but I don’t see why even Bruce would choose this world over the other. King’s decision to jump forward one year is interesting to me. I guess to show how much Bruce is willing to commit to this new timeline? Also, Catwoman seems to not have all of her mental faculties in this timeline. I don’t know if there is further reason for that, or if it’s just for her to cause chaos, leading to the death of his parents. Speaking of which, I don’t like the idea of how his parents die in this timeline. His father is maliciously sliced up by Selina and his mother is carelessly shot by a stray bullet from his oldest adopted son. That would be tough to get over, even once this all gets resolved. I know I’d be looking at these people differently.

Tony S. Daniel does a great job on the art here. He’s more consistent and symmetrical in this issue than the last, even though he doesn’t get to show off as much. I do like his Catwoman design, though. But at times, it seemed to have more of the normal costume vibes than in others. Regardless, Michelle Pfeiffer’s suit in the comics is awesome.

Sandu Florea helped on inks, and I like the arrangement these two have. It works nicely and keeps the book looking consistent. Tomeu Morey’s colors look great here. The city constantly being on fire creates for some interesting backdrops that could easily be forgotten about, but Morey remains consistent throughout. Especially in terms of location. Very well done. Clayton Cowles letters here, and I have yet to have found a hiccup in his work. Solid job, good sir!

Final Thoughts: Although interesting in its premise, and executed very well, the concept of this story unravels as you pull on it. Hopefully, King can do a patch job better than Booster Gold has been doing in the coming issue.