Batman’s Connection to the World of Pulp Novels 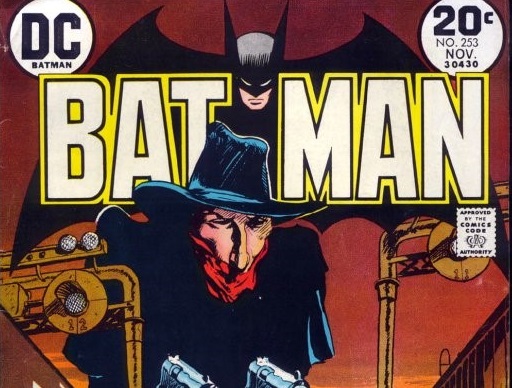 In the Dark Knight Returns, Bruce Wayne walked out of a Park Row movie theatre with his parents, jumping around excitedly after a viewing of the 1940 film “The Mark of Zorro”, his world forever changed as forty-five caliber bullets tore through the flesh and bone that had once been Martha and Thomas Wayne.  It’s no coincidence that Bruce’s last happy memory being so clearly tied to his memory of a hero in a black cape and mask fighting evil served as some sort of inspiration that set Bruce Wayne on the road to becoming Batman. While there have been a lot of different takes on Batman’s origins, this version is my favorite.  I like the idea that the idea that Batman wasn’t an original idea as Bruce Wayne would have everyone believe.  The whole concept of dressing up in a costume and beating up criminals is an inherently childish idea and it makes sense that even on a subconscious level, Bruce Wayne would have been inspired by his childhood hero. There’s a whole episode of Batman: The Animated Series, “Beware the Grey Ghost” that plays into this idea.

The other reason why I like the inclusion of Zorro, is that it’s a fun nod to the notion that Batman wasn’t created in a vacuum. A lot has been made in the media over the last few years to make the point that Batman didn’t emerge fully formed from Bob Kane’s brain but was a collaboration with Bill Finger that pulled from a lot of different influences.  It’s clear in looking at the pulp heroes that existed around the time that the character was first published that Batman was a creation that pulled and reworked from a lot of different places, some of which has been acknowledged, others less so.

The precursor to comic books was the pulp novel, cheaply made mass published stories that got their name from the cheap wood pulp paper they were printed on.  These stories were pumped out by publishing houses and featured serialized stories that tended to heavily rely on action, suspense, and sexual themes to appeal to as wide an audience as possible.  It was from these novels that a collection of larger than life protagonists and villains that would serve as a template for what eventually would become staples of superhero comic books.  These pulp stories often featured heroes that would don colorful and menacing alter egos to fight crime and go on other adventures by night.

Here are some of the characters that would play a roll in Batman’s creation. In addition to probably being the most well-known pulp hero, Zorro is his is probably the most widely known of Batman’s influences.  As I’ve already mentioned, Batman lore openly acknowledges Batman’s connection to Zorro.

Created in 1919 by Johnston McCulley, “El Zorro” or “The Fox”, was first published in the pulp novel “The Curse of Capistrano” which featured the introduction of Don Diego De La Vega, a wealthy landowner in Mexican Controlled California of the early 1800’s.  De La Vega donned the identity of Zorro to fight for the abused lower class against the other landowners and the villainous governor and military.  The novel was a huge hit, inspiring the 1920 film “The Mark of Zorro” starring Douglas Fairbanks.  It was this portrayal of Zorro as an athletic, swashbuckling hero that Bob Kane for years afterward would publicly credit as being a major influence on Batman as being a physical presence.  It’s not surprising when you look at early Batman stories of him swinging into action that the creators took their cues from Zorro.  Kane and Finger also clearly took inspiration from Zorro’s putting on a narcissistic playboy persona in public as a cover for his nighttime activities as a caped avenger.  Zorro also operated out of secret lair underneath his mansion and had a trusted manservant named Bernardo.

It’s funny to note that Frank Miller chose to have Bruce Wayne walk out of the 1940 Tyrone Power version of “The Mark of Zorro”, which premiered the year after Batman’s publication, in the Dark Knight Returns when Kane sites the silent 1920 film as an inspiration.  Maybe Miller just liked the later film better. The Shadow was originally the created as the narrator for a 1930 CBS radio show ‘The Detective Story Hour”.  The character was a huge hit and a series of novels was then produced by writer Walter B. Gibson.

In the pulp novels, The Shadow was really Kent Allard, a World War I fighter pilot that decides to take up crime fighting after faking his death, donning a wide-brimmed hat, a red scarf over his face, and a black cloak.  Allard arrives in New York City and takes up several false identities, including that of “Lamont Cranston” a wealthy member of high society.  In this version, Lamont Cranston is a real person that eventually make a deal with the Shadow and allows him to continue to impersonate him.   In the novels, the Shadow jumps between identities and disguises to get various bits of information on whatever criminal he is chasing (which would later serve as inspiration for Sam Raimi’s film Darkman after he couldn’t secure the rights to The Shadow).

The Shadow was then adopted into a radio drama in 1937 that would streamline his backstory and identity to be Lamont Cranston, and giving the Shadow a more supernatural flare, with the ability to disappear and “cloud men’s minds” through hypnosis, and the backstory of being trained in Asia was added.  It’s this version of the character that served as the basis for movies and other media and is the version that most people think of as being the Shadow.

The Shadow is another widely acknowledged influence on Batman’s creation.  Kane has publicly acknowledged being inspired by the Shadow and it’s easy to see in some of Batman’s earliest stories that Finger and Kane looked to the Shadow in crafting Batman as a shadowy and mysterious figure in a dark cloak.  It should be noted that Batman’s mask and cape were originally intended to be black, but due to the constraints of four-color printing technology, an all-black mask and cape would have had no detail to it, and the blue highlights used to distinguish the features of the costume quickly changed the overall color palette of the costume. Doc Savage was created by publishers Henry Ralson and Jon Nonovic and fleshed out into novels by author Lester Dent, first appearing in “The Man of Bronze” in March of 1933.  Clark Savage Jr. was trained from birth to be the perfect specimen, both mentally and physically, with near superhuman strength and mastery of the sciences.  Doc Savage was an adventurer who would take on spies and crime rings as well as mad scientists and strange monsters.

While Doc Savage has often been linked to being an early inspiration for Superman and Captain America, its easy to see how Batman, who is often portrayed as being the pinnacle for how far you can take human achievement both mentally and physically if you work hard enough. As shown below in a panel from Batman #1, the earliest origins of Batman showed years of physical and mental training to prepare for his war on crime. For a more direct connection between Doc Savage and Batman, Chuck Dixon has sited Doc Savage as the main inspiration in the creation of Bane as a twisted version a man obsessed with becoming the perfect human specimen. The Black Bat was first published in July 1939 in the magazine Black Book Detective.  Created by Norman A. Daniels, The Black Bat was the alter ego of Anthony Quinn, a former District Attorney that had been blinded after a criminal threw acid in his face.  An operation to repair his eyes left him with the ability to see in the dark and Quinn became a vigilante, wearing a bat-like mask and cloak and would slap a bat-shaped sticker on the foreheads of his defeated foes.

The Black Bat’s connection to Batman is a little murkier.  Batman made his debut in May 1939.  Two months later the Black Bat’s first story was published.  The creators of both books claimed that one was a cheap knockoff of the other.  Both publishers threw around threats of suing one another but it seems that they settled on agreeing that Batman would stay in the comic books and the Black Bat would stick to pulp novels.  There was another pulp character called the “Black Bat” which appeared in magazines in 1933, but this version of the character was a detective that left a black bat calling card and doesn’t really have any other similarities to the Black Bat that followed Batman’s creation.

By publication date, it seems like a lot of the original ideas for Batman that were featured in the first few stories could not logically have had any sort of influence from the Black Bat. That being said, the scalloped gloves/gauntlets that we know so well today were inspired by similar gauntlets worn by the Black Bat.  It’s also interesting to see the similarities between the Black Bat’s origins and that of Two-Face. The name Black Bat would also make it directly into Batman’s world for a short while and remains my favorite identity for Cassandra Cain. If you look at Batman’s first few appearances, it is clear that Batman owes a debt to a history of pulp characters.  The Batman of 1939 was a wealthy member of high society that put on a disguise to take on mobsters, spies, monsters, and vampires.  It would seem that Bill Finger and Bob Kane took the conventions that had been made popular in the pulp novels and melded it with the new breed of costumed heroes like Superman.  Batman would have fit right into the pulpy world of a character like The Shadow. Those two should really meet sometime… Writer’s Note:  I don’t claim to be any sort of expert in the world of pulp fiction.  This article is intended to only be an introduction to the world of pulp novels. Special thanks to thepulp.net, vintagelibrary.com, casscain.wikia.com, and goodreads.com for their invaluable information.  I strongly encourage you to head over to those sites for information on everything mentioned above regarding the characters and much more.