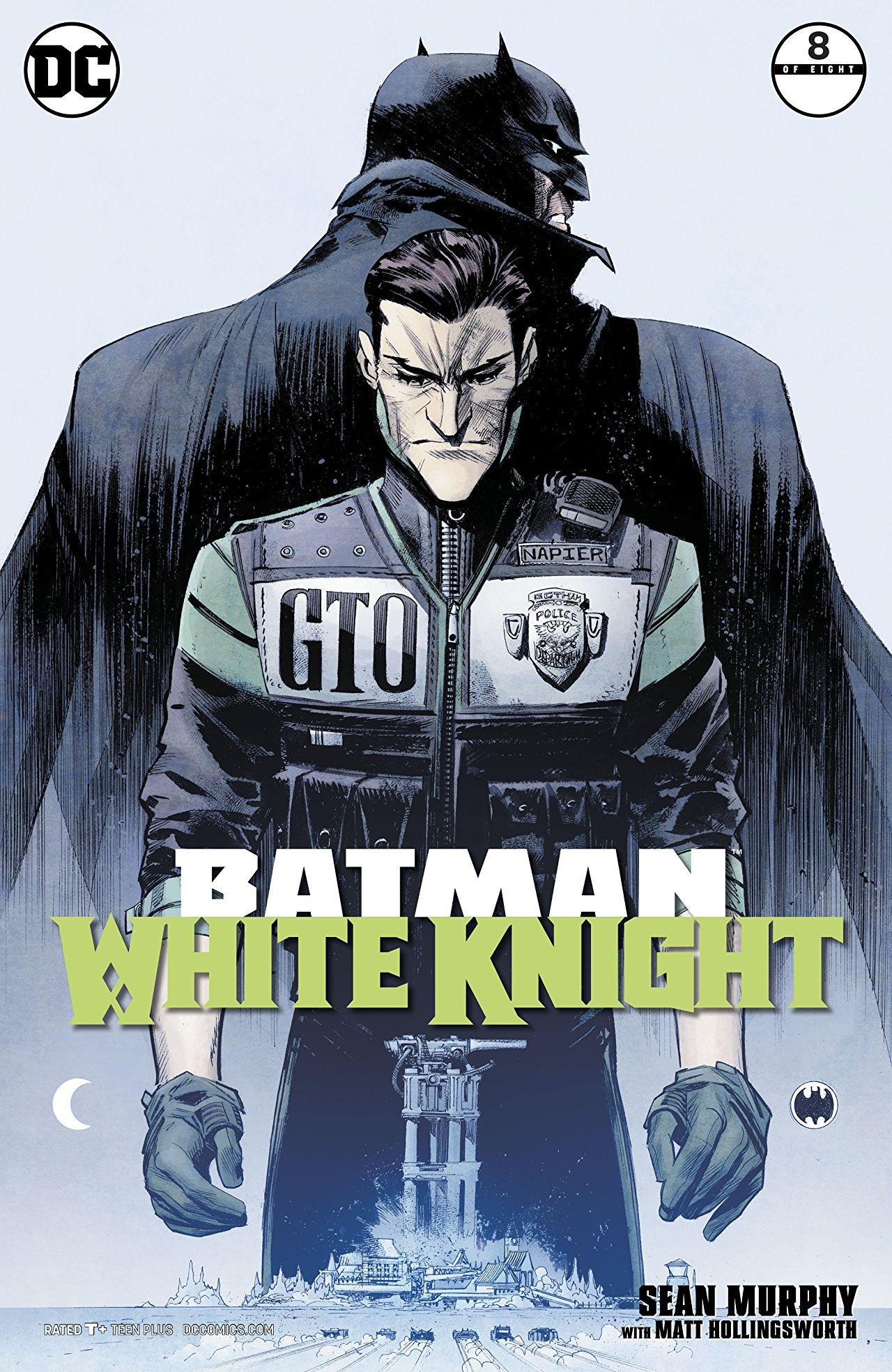 Overview: Batman and the GTO Unit race towards the Freeze cannon as this epic tale reaches its conclusion.

Synopsis (spoilers ahead): Joker and Batman race towards the cannon when they are confronted by Bane. Batman is reluctant to trust Joker, but Joker says he’s more useful than Jack in the current situation. Meanwhile, the rest of the GTO teams are all about to converge on the cannon when they are met by a bunch of different villains including Two-Face, Ivy, Riddler, Roxy Rocket, Penguin, and Croc. They cannot directly engage them because they risk compromising the tunnels. Neo Joker and Hatter are trying to get a handle on the ensuing madness as all the different Batmobiles emerge at the base of the cannon and start attacking the villains. Batgirl is in the Tumbler and she uses the rocket system to propel herself to the top of the cannon where she is attacked by Poison Ivy. Ivy, Neo Joker, and Hatter are forced to retreat under fire from Batgirl’s backup; Victor Fries.

As Victor works to reverse the effect of the cannon on Gotham, Joker starts fighting Neo Joker on the ground. A punch breaks Neo Joker’s mind control device which leads to Clayface reconstituting himself and regaining his autonomy. As an enraged Clayface starts charging at the Joker, Batman gives Joker the keys to the Batmobile and tells him to get out of there. Harley jumps in the car with Joker only to find that Jack has momentarily regained control. They share a heartfelt moment, but Clayface eventually lands a blow on the car causing Jack to lose control. With a metal wall blocking their path, Jack uses the eject function to give Harley the Batcycle so she can get through the opening as he crashes in the Batmobile on the other side. Thinking that Jack is dead, Harley takes off after Neo Joker and Hatter.

The cannon and the room it’s in then starts to crumble as everyone scrambles to reach higher ground. Victor manages to reverse the effect and send a beam across Gotham that restores it to its normal state. Batman dives under the water to retrieve a drowning Jack and drag him to safety. As this is happening, Harley finally catches up with Neo Joker and is about to kill her when Duke tells her via their comm system that Jack is alive. She ties up Neo Joker and rides the Batcycle back to the dock where she is reunited with Jack. Jack honors his deal with Batman and asks to be taken back to Arkham before he reverts back to being the Joker.

At Arkham, Gordon tells Jack that they have a new and improved cell for him and Jack requests that Harley and he be married. A priest is sent for and the couple is married but the Joker resurfaces at the end of them exchanging their vows.

The Bat-Family gather together to collectively read the letter Alfred left for Bruce. Jack’s videotaped confession is played on the news and Harley donates everything to help build a new library in Backport. Batman pays a visit to Harley and reveals that he knows about her masterminding everything that has happened. She accepts and says that she did it because she wanted to break the stalemate between Batman and Joker and because she wanted Gotham to get to know the man that is Jack Napier. Finally, Batman visits Gordon at the GTO HQ and gives him permanent access to the Batmobiles and all his tech. Batman also confesses his personal flaws and shortcomings as Gotham’s vigilante and honors his promise to take off the mask to get Gordon to trust him again.

Analysis: What a conclusion to arguably the greatest Batman comic book story in recent memory. There is so much to write about here but I will try to be as brief as possible. Murphy does a masterful job in tieing all the different threads together and giving us an incredibly emotional and satisfying ending. I was interested in this story for the alternative interpretation of Batman as he comes into contact with different political and social issues, but one of the most welcome surprises to me has been the development of Harley and Jack’s relationship. Murphy devotes considerable time in this issue to the couple with a couple of heartwarming moments and one heart-wrenching moment. In expressing to Harley how much she means to him, Jack is validating Harley’s conviction that there is a good man in there that is worth fighting for. And it’s not just about putting on a show for Harley, because Jack follows through on his promises to Batman as well. It was absolutely devastating to see Jack revert to being the Joker right before he could complete his wedding vows. I really enjoyed the two panels in the middle of the page where Jack’s smiling face turns into Joker’s pale, emotionless expression. It inverts the traditional Joker grin which then returns with shocking effect on the next page.

If that wasn’t enough to stimulate the tear ducts, then Alfred’s letter to Bruce will definitely do the trick. The Bat-Family’s father figure had one last pearl of wisdom to bestow upon his young master. Alfred’s message is one of healing and invites Bruce to learn the one lesson he has never been able to master; move on. The letter shows how well Alfred knew Bruce and calls on him to emerge from the darkness, embrace the light and surround himself with people who care about him. No man is an island and while Bruce has surrounded himself with associates and partners, he’s always kept everyone at an arm’s length. It’s nice to see him changing and evolving as a person when so many Batman stories portray Bruce as being a one or two-dimensional character.

Barbara and Dick are not the only two that Bruce makes peace with as he also softens his stance towards the GTO. In talking to Gordon, Bruce lays bare his soul as if he is making a confession. Jack’s confession occurs a few pages before this and it’s interesting how they parallel each other in some ways. Batman recognizes that his methods and the safety of police officers can be improved by working together with law enforcement. He also admits that part of him enjoys the pain he delivers to criminals. In acknowledging this, Bruce undergoes a personal breakthrough and finally removes the cowl to reveal his identity. To me, it felt like the breakthrough allowed him to finally accept being Bruce Wayne again. Batman has always been his “true face” and Bruce Wayne the “mask”, but now it feels like Bruce Wayne will try and live as a complete, self-actualized human being and Batman will be secondary to that. I expect Bruce revealing his identity to the world will be controversial to some fans, but I would argue that it’s the logical conclusion to the interpretation of Batman in this particular world.

The art in this issue and in the entire series has been stellar. I’ve said that repeatedly in my previous seven reviews and I’m going to say it again here. The only minor criticism I have for this issue is that some of the physics in the action sequences didn’t really seem realistic. Of course this is a comic book so action will be exaggerated to a certain degree, but even so, I thought it could have been a bit more realistic. Aside from that minor nitpick, I only have good things to say about the art. Hollingsworth’s colors are again on point here as he gives the story an extra injection of energy and emotional resonance as the situation requires.

Last but not least, there were a few hints in the latter pages of this issue that could be providing us some hints at a potential second volume. Harley’s enigmatic look when asked if Jack is really gone and the postscript in Alfred’s letter directing Bruce to look under the floorboards in his room could be the first breadcrumbs.

Final Thoughts: The conclusion to one of the greatest Batman stories ever. It’s required reading for every Batman and comic book fan. This story features a fresh interpretation of Batman and Joker engaging with complex political and social issues while simultaneously exploring the natures of their own relationships. There’s also enough action, humor, and romance to keep readers engaged. It’s a timely and impressive addition to the Batman mythos.