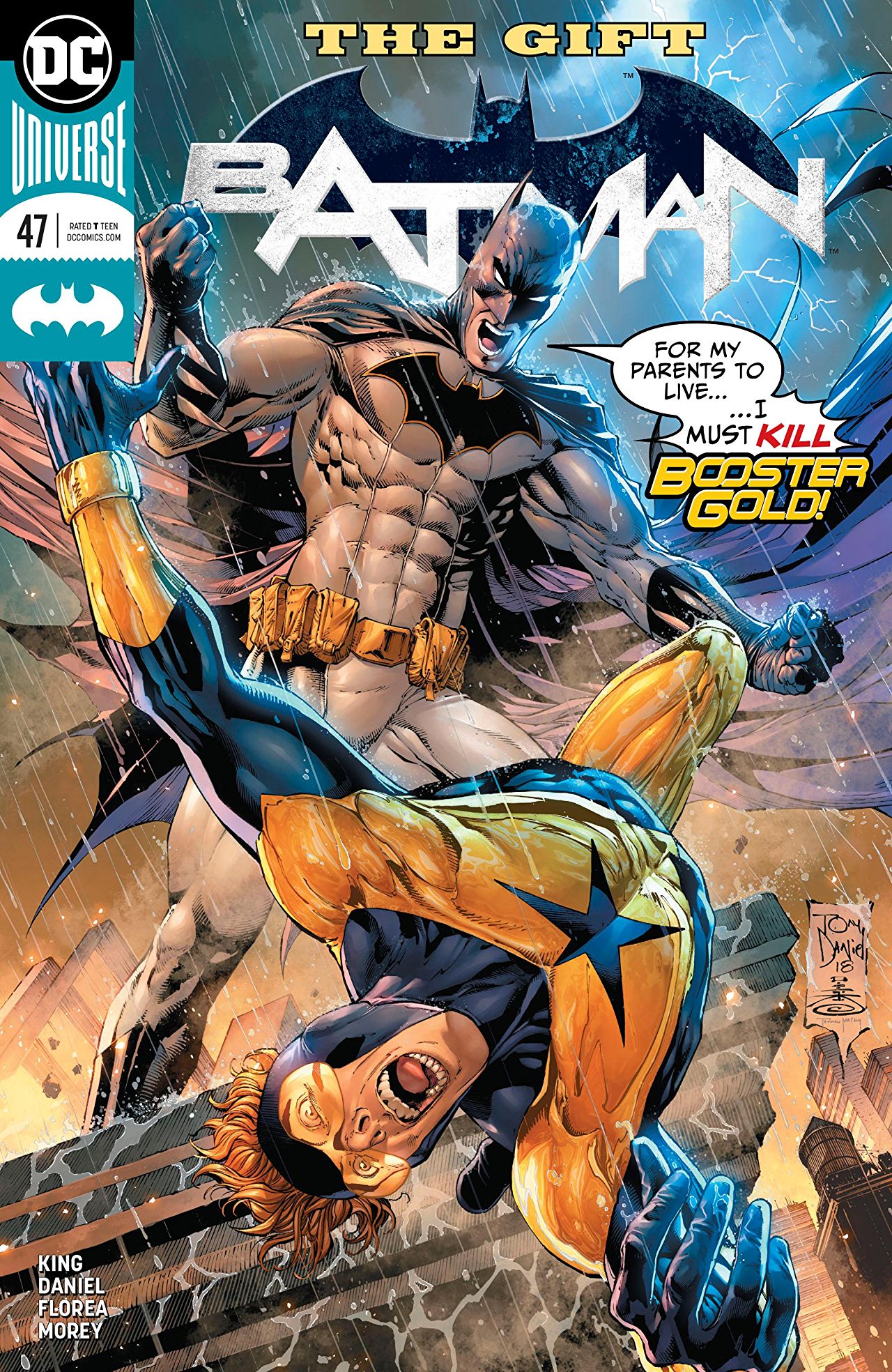 Overview: Booster Gold’s third attempt to save the day brings us to the dark heart of Batman’s origin.

Synopsis (spoilers ahead): One year after the Booster Gold’s catastrophic attempt to spur Bruce Wayne into choosing Batman over his life in the current dystopic world that ended with the death of Selina Kyle, Dick Grayson, and both Thomas and Martha Wayne, Skeets is reactivated. Bruce Wayne, while practicing shooting Batman and Catwoman’s heads off, orders his technical team to get around the voice activation problem, but only Booster’s voice can activate it. In what would be the Batcave in our timeline, an extremely shaggy-haired and emaciated Booster boasts of being the greatest hero no one has heard of to Bruce. Bruce counters by saying he knows who Booster is: the man who caused the death of his parents by Batman and Catwoman. Booster reconsiders, then declares himself the greatest hero only one person has heard of. Bruce orders Booster cleaned up and brought to the library, and Booster begins telling the staff his backstory – a football star forced into cheating by his father, then a janitor in a history museum, who stole artifacts to become a time-traveling superhero in the past.

In the library, Booster and Skeets are reunited, and Bruce, wearing a skull-like armored vest (very like the Punisher), orders the two to take him to the past to kill Batman and Catwoman before they kill his parents. Booster manages to manipulate Bruce into traveling ten minutes before his parents were killed – not one year ago, but instead, in Crime Alley outside the movie theater.

Infuriated, Bruce tries to shoot Booster, but Skeets flies in front of him and is destroyed. Again. Booster mourns that he’s stuck without his friend, but Bruce begins beating and threatening him. Booster says that being a hero with the other heroes of the 20th and 21st century is the best family he’s ever been part of, so he got Batman a wedding gift.

At that instant, Booster from the past shows up, from his original jump to stop the murder of the Waynes, and he expects that the Bruce and Booster he sees now are from the alternate timeline he will have caused, come to stop him. The commotion caused by two Boosters and Bruce fighting for Bruce’s rifle causes Thomas Wayne to cut through the alley behind the theater, as young Bruce fantasizes about being a hero like the one in the film they just saw. Just as Bruce is about to kill Booster, he hears Joe Chill’s bullets murder his parents. The sight drives him to kill himself, and just as we saw in the first issue of this arc, Booster’s goggles are covered in blood from another suicide.

In our present timeline, we see Batman and Catwoman standing silently as Booster recounts his catastrophic gift. Booster babbles, helplessly, and ends saying that he can’t get the blood off the goggles, even though there is nothing there.

Analysis: In his previous twelve-issue miniseries Omega Men, Vision, and his current series Mister Miracle, Tom King will often have episodes or full issues which at first seem only tangentially related to the main story. However, when the story comes to its climax, these elements are woven into the main thematic thrust of King’s argument, often with profound emotional impact. This arc, “The Gift”, seems to be one such seeming digression. However, since King’s planned arc is one hundred and three issues instead of twelve, the relationship to his overall argument and emotional impact are a long time in the future. At this point, all we have is an arc that explores some interesting issues and potentially casts the next fifty plus issues in a strange relationship to canon, since an alternate timeline has already been suggested by Bruce in the future of the Batman Annual #2.

Tony Daniel again provides strong pencil work, with inks from himself, longtime inking partner Sandu Florea, and DC inking veteran Danny Miki. Some of Daniel’s faces do sometimes feel oddly foreshortened, causing a feeling of seeing them through a slight funhouse mirror, but on the whole, the dramatic poses, strong facial features and expressions, and solid compositional construction (the mirroring of the suicides from the first issue and this issue particularly) provide the sense that despite the chaotic and destructive nature of the event King has jumbled together, the careful crafting of an emotional setup for later payoff is still in effect throughout this arc.

Though that craft does reassure readers who aren’t especially engaged with Booster Gold and this disturbing alternate future, there’s a certain amount of frustration involved in spending three issues, a full month and a half, on something that doesn’t really seem to stand alone in terms of being a worthwhile use of sixty-pages of story time. Though the double shipping of the Batman title does mean that the digression doesn’t impact the readers as much as a traditional monthly schedule would, one still has to ask if it’s worth it.

In the end, though, reading a Tom King long-form story always demands patience and close attention to the seemingly irrelevant or difficult to contextualize details. When all the pieces are in place, the reward is almost always worth it – and one hopes that the one hundred and three issues of King’s Batman plan will prove just as rewarding.

Final Thoughts: Our time in this alternate universe comes to an end with an open question: how will this impact Batman’s future?