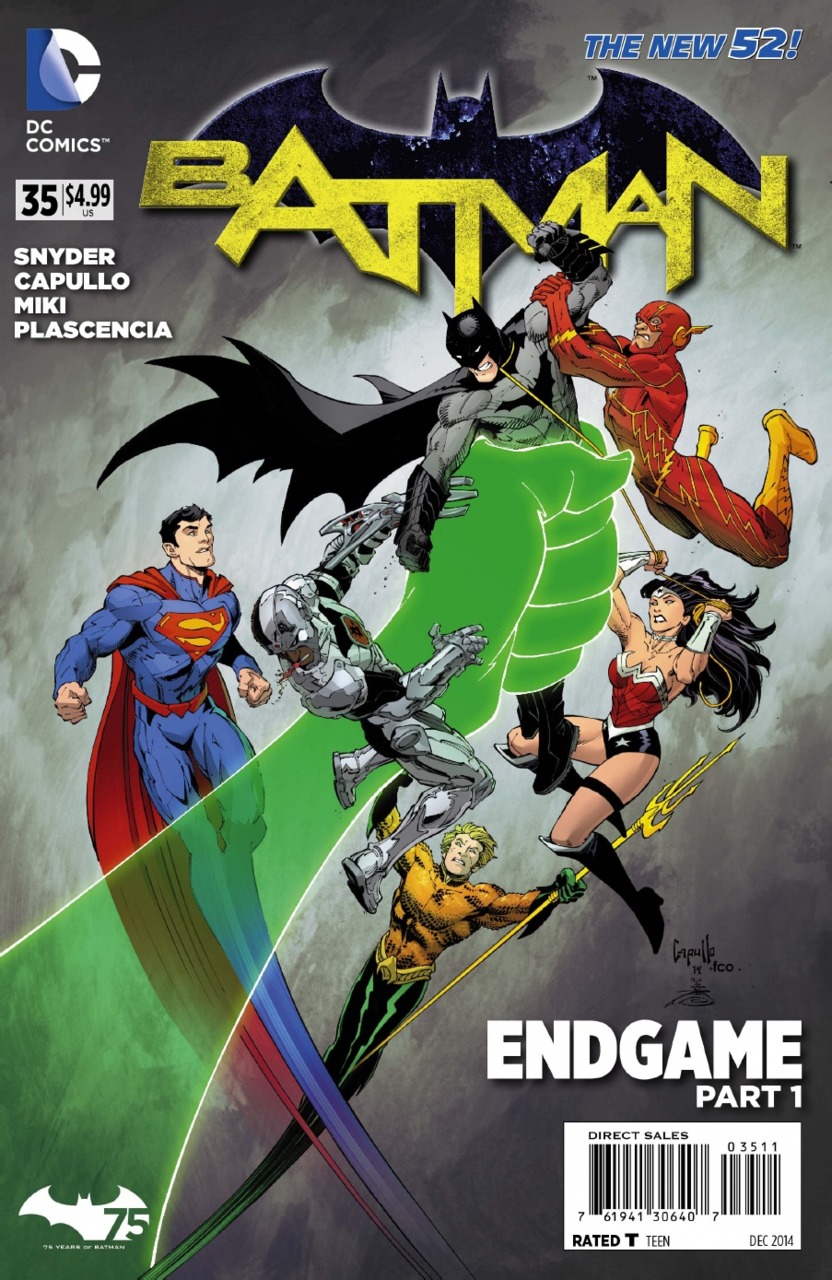 I apologize to you guys for this being so late. It’s been a real busy week for me. But in the week that I’ve let this issue simmer in my mind, the more excited I got. I saw the reaction on Twitter. I saw the EXCELLENT reviews this issue got. But I didn’t feel the same. I didn’t feel like it added anything great. It kinda felt like a brawler issue. ‘Let’s put Batman against the Justice League, just because it’s his 75th anniversary!’ I thought it was good, but nothing special. A week ago, I would have given this comic a 3.5 out of 5… This week, I will tell you why I was wrong.

This issue is more of a setup. Showing the potential this story will bring. Who ‘you-know-who’ is capable of. And that is what makes this so great.

I’ll start from the beginning… Gotham is crumbling. Some strange, alien creatures are fighting one-armed, gun wielding Batman. Although, it seems to be shooting sound waves, or something like that, destroying the creatures. He is assisted by Bluebird and Lark (maybe Duke from Zero Year and Batman and Robin: Futures End?… Looks like him anyway). They are overtaken, and Bruce wakes up.

Scarecrow has doused him recently with a high-grade fear toxin that makes you relive your death over and over again as in a dream. He has set up a new Batcave in the middle of the city. It is one of the Court of Owl’s old bunkers. It has lights, and windows, and not black… Weird. Julia is still helping out, along with Alfred. With this cave being so open, does that mean Bruce being Batman is public knowledge? Does the Court of Owls bunker have something to do with the End of Eternal?

Suddenly, Wonder Woman crashes through the window, takes Bruce, and tries to kill him in a park for all to see. But Bruce has a plan, or course. Alfred releases a cloud of smoke that blankets the city, making cover for him, and clearing everyone off the streets.

Batman emerges in a mech suit, and the battle begins. At some point, Batman ties Wonder Woman in a lasso of lies made by Hephestus, which makes her see what she wants to do with Bruce… Which is brutally murder him. The Flash shows up next, tearing the suit up as everything else runs in slow motion, until Batman hits him with an anti-friction gun, and he crashes into a building.

Aquaman shows up, but Batman quickly takes him out with some Bazooka Bubblegum, which absorbs the water from his body, the more he struggles. But Batman waits… Preparing for Cyborg and Green Lantern next, but it’s not them. Not yet. Superman knocks him through a theater. Batman asks who did this to them, and Clark replies, ‘Well, that’s actually sort of… Funny.’

There is a backup story, that has been placed back in the book. A neat story about how these serial killers, who killed because the Joker told them to. And they believe that he is the devil incarnate. They are each supposed to tell an Arkham nurse a different version of the Joker’s origin, and the one who gets it right, lives… As we see Joker smiling in the trees behind.

This reminded me of Batman Beyond: Return of the Joker, where Joker used Tim Drake as a host for his consciousness. I think a similar thing may be going on here, except he has used all of Batman’s allies against him. Batman vs. Joker or Batman vs. Superman?… How about both?

Scott Snyder has built up the potential to tell the ultimate Joker story. This issue represents what this story could bring. There are so many ideas flowing through my mind right now…