Review: Batman: Prelude to the Wedding-Robin vs Ra’s al Ghul #1 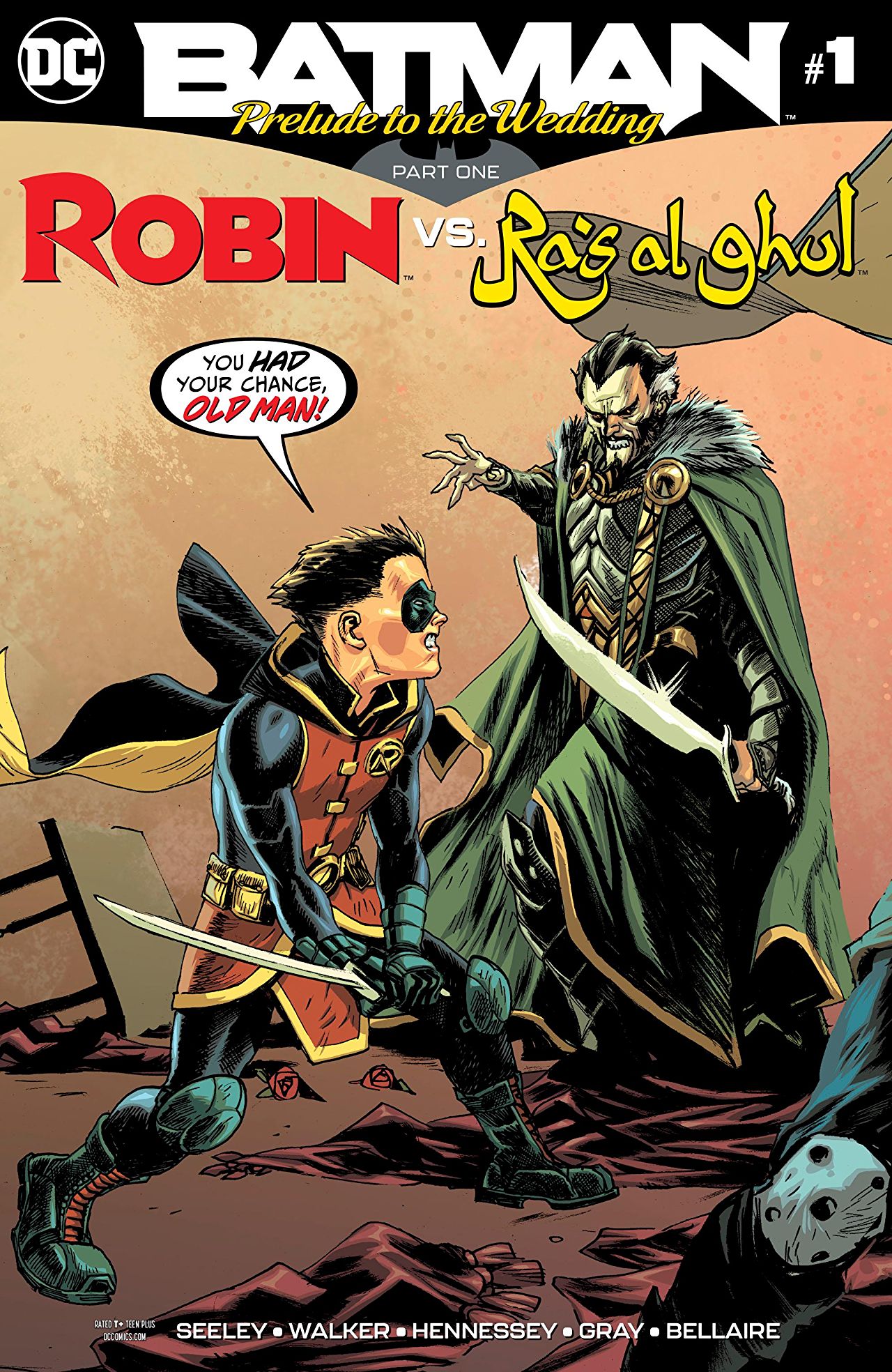 Overview: Damian’s night out before his father’s wedding is interrupted by a deadly new foe.

Synopsis (spoilers ahead): The story opens with Damian at a tailor being fitted for his wedding attire as Selina Kyle looks on.  The tailor appears to accidentally prick Damian with a needle.  Damian and Selina finish with the tailor and part ways after a few hostile words from Damian, with Damian running off to get some time in at an arcade after hours.

Damian’s gaming is cut short when a new adversary, a costume attacker with a cowl and cape brandishing a whip who calls himself “Aion”.  The two fight in the arcade, with Aion revealing himself to be the future son of Bruce Wayne and Selina Kyle to Damian’s shock.  Damian finds himself turned into the Batman #666 version of Batman and manages to put down Aion, after realizing that he has been drugged by the tailor’s pinprick and that he is hallucinating. Damian finds himself being visited by his grandfather, Ra’s al Ghul, who attacks Damian before turning into the future Damian Batman and speaking about Damian not being worthy of being part of Batman’s family before disappearing.

Back at Wayne Manor, Selina comes home from her bachelorette party to find Damian waiting up for her on the couch and the two agree to watch out for each other.  The story ends with Ra’s al Ghul discovering that a room full of his men are dead, with “HAHAHAHA” painted on the walls.

Analysis: Batman getting married is a big deal.  And whether or not the ceremony actually happens not, it is no surprise that DC has put out a series of tie-in books to capitalize on such a big event.  The premise of the books is sold as having each of the various members of the Bat-Family reacting to the last few days leading up to Bruce tying the knot.

This book’s focus is on Batman’s biological son, Damian.  It’s a logical story to explore and there’s a lot of ideas that can be explored with Damian dealing with the fact that his father is getting married and the fears that he might be replaced or lose what is unique about his role in the family such as if Batman should have another biological son, one that Bruce actually chose to have as opposed to Damian being created in secret in a lab.  Damian has always thrown the fact that he’s Batman’s actual son in the face of the other former Robins and it’s an interesting character point for the book to explore.

While I find the idea behind the book to be interesting, it is in the execution that the book, frankly, fails.   The idea of pairing Damian with his soon-to-be-stepmother is an interesting dynamic, but the book gets rid of Selina at the first opportunity.  If this book was supposed to be about Damian coming to terms with his fears that have surfaced with the wedding and finding some common ground with Selina, I can’t help but be confused with the decision to get rid of Selina at the first available opportunity.  I buy the idea that Damian might have trouble accepting his father’s new wife. What I don’t get is why at the end of the story he’s able to find some common ground with her.  If this was the end result that the creative team wanted, the story would have been better suited to have incorporated Selina into the whole issue.

I also have to call out some extremely clunky dialogue when Damian is recounting his origins to Selina.  Isn’t this all information that she should know already?   I get that every comic is someone’s first and in a story featuring Damian so prominently, that the writer is trying to catch the readers up on Damian’s backstory, but there are other more organic ways to convey this information then having Damian launch into a no-reason origin monologue to Selina.

The pencils by Brad Walker are clean and convey the story well. I do have to say that I kept noticing the lack of any real backgrounds in the panels, which to me seems like a bit of a cheat, which is all the more jarring when the story switches to Otto Schmidt’s more detailed art in the epilogue.

Final Thoughts: Books like this are meant to be character pieces, with a clear build to the big event of Batman #50 where the Joker looks to be getting ready to do something horrible. While I can appreciate some of the ideas that this book wants to play with, I just don’t feel they are conveyed or executed well.