Review: Batman: Prelude to the Wedding: Nightwing vs Hush #1 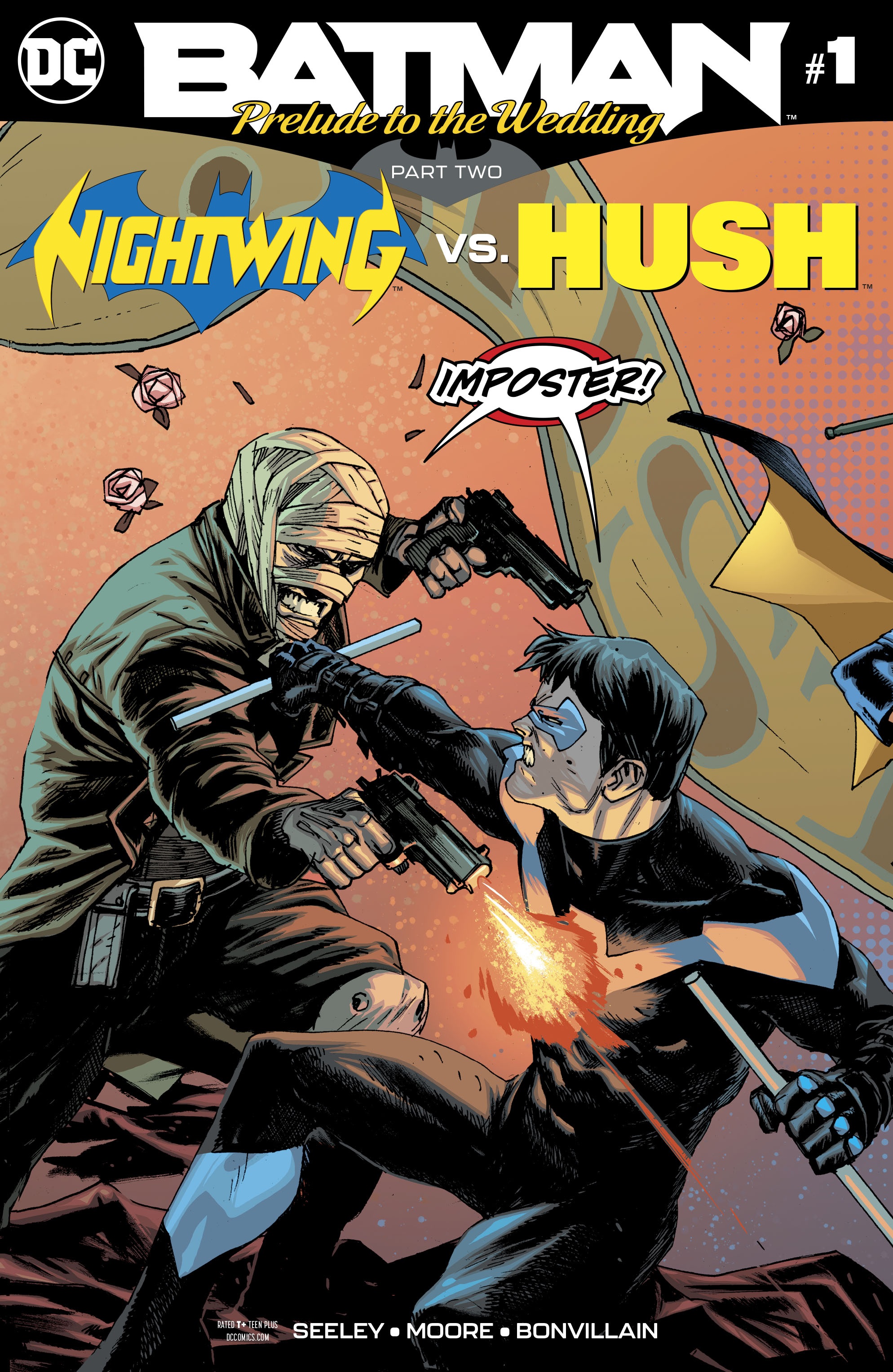 Overview: Batman’s bachelor party is interrupted by Hush who faces off with Nightwing.

Synopsis (spoilers ahead): The story opens with Batman in the back of a limo with Superman and Nightwing as they head out to throw Batman a bachelor party before he marries Catwoman.  They hit a Bat Burger and are about to go for a fishing trip in a pocket universe when their limo is attacked by a rocket wielding Hush, who has been tipped off about the impending nuptials by the Joker.

Nightwing lunges at Hush and the two are transported through the now malfunctioning door to the pocket universe into a kind of dead zone called the “Betwixt”, essentially “down” version of Gotham.  A guide of sorts appears to explain where they are, “The Guy Who Likes It Here”, and a mob of faceless hoards appears and attacks Nightwing and Hush, drawn to attack anything with a sense of identity.  “The Guy Who Likes It Here” explains that they need to go somewhere where their sense of identity is strongest to hold off the hoard until Batman and Superman can find them and pull them out of this dimension.

Nightwing takes Hush to Wayne Manor where they reminisce about Hush growing up as Bruce’s friend before Hush attacks and unmasks Nightwing.  Hush then reveals that he has surgically altered himself to look like Dick Grayson, so he can become Bruce’s best friend again.  Hush is attacked by the hoards who are drawn to his identity crisis as Nightwing is pulled out of the Betwixt by Batman.  Dick and Batman talk after, with Dick coming to terms with Bruce picking Superman as his best man and the two making plans to hang out soon.

In the epilogue, Nightwing warns Batgirl that the Joker knows about the wedding as the Riddler finds himself with a bloody heart painted on his chest as all his men lie dead with “Where’s my invitation?” written on the floor in blood.

Analysis: The difficult thing about reviewing something featuring a character you love is that you have to leave your fandom at the door.  Batman is a character that is very much open to interpretation and like any other fan, I certainly have my own take on Batman and his world and there are times when that might run into conflict with a creator’s take on the character.  This brings us to this issue, which continues the countdown to Batman getting married with him out at his bachelor party, with a night on the town with the two people closest to him, Nightwing and Superman.  I like the idea of framing an issue around a “bachelor party”, but I’ve always considered Batman to be a character who isn’t really that fun at parties and would never agree to a night off with being dragged into it and the idea of Batman in full costume eating burgers and going fishing is just plain silly.  I would have preferred either a more character-driven story set with the three heroes out of costume, or Batman dragging the two of them along for Batman’s version of a good time, which typically involves punching mobsters in the face.  That all being said, there’s nothing really wrong with what they chose to do here, it’s just not my personal taste.

The whole concept of these preludes is to have the various members of the Bat-Family’s reactions to Batman getting married and I like the idea.  The wedding storyline hasn’t really been addressed by the other titles outside of Tom King’s run on Batman and as that doesn’t appear to be a focus of the main book, it’s a great place to tie a few issues in leading up to the big day.  What is baffling to me, is the way these books are structured.  Much like with the previous book focusing on Damian, instead of having Nightwing interact with Batman and explore their relationship, the book conveniently separates Nightwing only to have him go on a bizarre, heavy-handed solo adventure, in this case being guided by “the Dude” from the Big Lebowski as played by the Question.  The book does nothing to set up any kind of personal issue that Dick might be having about not being picked as Bruce’s best man but then treats it as something to resolve at the end of the issue and comes across as an afterthought.  Its as if the writer only remembered halfway through writing the issue what the point was supposed to be.

I get what the creators are trying to explore here.  Dick Grayson’s relationship to Bruce Wayne has changed and shifted over the years with characters being de-aged and the inclusion of giving Bruce a biological son, and has gone from being more of a Father/Son relationship to what’s being presented here as more of a friendship.  There’s a lot of ground that can be covered and I get why the story would use Hush, Bruce’s former best friend, as a way to explore these themes, but as presented here, its overly convenient and to have them sucked into a dimension that focuses on the very themes that the creators want to explore and reading this issue feels like being hit in the face with a thematic two-by-four.

The art by Travis Moore in the main story and Otto Schmidt in the epilogue is a stand out.  The details of the pocket dimension and the character work by Moore are standouts for me and I’d like to see more from him.

We do get a quick mention that resolves the notion of that it would raise eyebrows for Bruce Wayne to marry a convicted criminal by having Batman and Catwoman being the ones getting married.  I’ve always assumed, that as much as I’d like to see the marriage actually happen, that DC would be unwilling to marry off Batman.  Presenting it as something between their secret identities gives DC an out if they want to use it.  Batman and Catwoman could, in theory, be married but not in each other’s everyday lives and it would be interesting to see writers play with Bruce Wayne balancing keeping up appearances with the fact that he’s in a committed relationship in his other identity.  Batman # 50 is around the corner so time will tell where this goes.

Final Thoughts: This book feels like it wanted to do something original and explore Nightwing’s connection to Batman in a new and interesting way, but got tangled up in its own themes and as a result, falls flat on whatever face Hush happens to be wearing.