Review: Batman: Prelude to the Wedding: Batgirl vs The Riddler #1 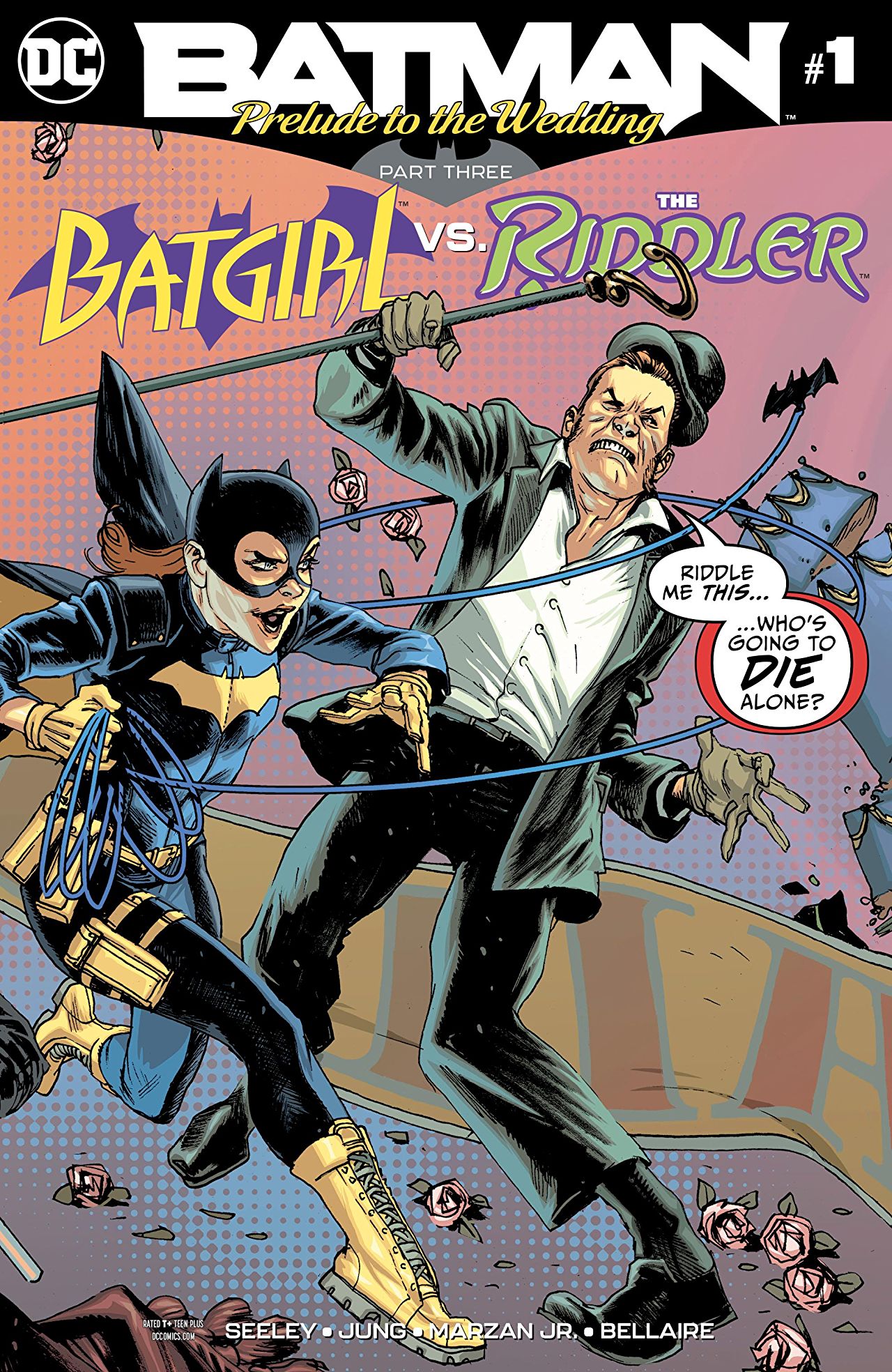 Overview: As the countdown to Batman’s marriage to Catwoman continues, The Riddler arrives in Burnside and targets Batgirl.

Synopsis (spoilers ahead): The issue opens with Batgirl finding an old Walkman on a rooftop with a “Put me on” sign.  A tape plays from the Riddler, stating that Batgirl has to play his game or people die, with Batgirl swinging away as a fiery question mark burns on a rooftop.  The issue then flashes back a few hours with Batgirl dropping by her apartment for a snack during a quiet night on patrol.  She speaks with Dinah Lance on the phone, who grills her about her impossibly high dating standards and how she finds flaws in everyone she meets who isn’t Nightwing.  The call is interrupted by a scream when a neighborhood florist discovers that her wife has been abducted, and Batgirl is drawn to smoke on a nearby rooftop, which brings us to the start of the issue.

The Riddler recounts his origins to Barbara in her recording as she swings through Burnside and explains that there are four riddles and four death traps.  Batgirl solves the first riddle and finds a hostage in a mausoleum, who she rescues and finds another cassette which continues the Riddler’s recorded message and another riddle.  Batgirl finds another hostage encased in a statue and as she fights off Riddler’s goons, the Riddler calls attention that his hostages are wedding themed: a florist and a DJ, in honor of Batman’s impending marriage.  Batgirl proceeds to save a priest from a bell tower and begins to notice a pattern, that the locations of the hostages form a ring on a map, which brings her to find the Riddler on the rooftop she found the first tape.

The Riddler gives Batgirl one more tape and the two fight, with Batgirl realizing the location of the final hostage, a child serving as a “ring bearer” encased inside a billboard.  Batgirl rescues the child, only to find that the Riddler has escaped.  As Batgirl leaves the crime scene, she makes a call to Dick Grayson, asking him if he wants to get some coffee.

In the epilogue, a bloodied Riddler wakes to find himself on a cargo ship, having been attacked as from behind.  The issue ends with Harley Quinn standing over the Riddler, and she’s looking for the Joker.

Analysis: This is the third book in the series of one-shots that tries to get some mileage out of the concept of characters from Batman’s world interacting in the days leading up to the big Bat/Cat wedding that may or may not go ahead with July’s Batman #50.  In this case, Riddler comes to Burnside to toy with Batgirl.

The Riddler is a character that has gone through something of a vicious makeover in recent years, and fittingly enough, the Riddler of this story is in line with Tom King’s version of the character.  Riddler has always been characterized in previous versions, such as in Batman: The Animated Series, as an insecure figure who seems to want to prove to the world how smart he is, and while, don’t get me wrong, I love those stories, there is something so much more interesting to me about how the Riddler is presented here.  The Riddler in this story is cold and calculated and seems to set this plan in motion as a sort of twisted academic exercise, trying to wrap his mind around the idea of Batman being in love with someone so opposite to himself with a sort of alien confusion.  This version of the Riddler plays with people like a kid who traps an insect in a jar and watches with fascination while it suffocates, and I find that so much more interesting than a brainy villain with something to prove.

I also enjoyed how he targets Barbara, not because he actually thinks there could be some sort of romantic future with her because that would be silly and out of nowhere, but more of the Riddler treating Batman getting married as some sort of mathematic equation. Batgirl is standing in as a sort of counterpart to himself as he tries to work the whole thing out, which makes sense, as I don’t think there’s any debate that Barbara is the smartest member of the Bat-Family.   I liked that the Riddler acknowledges one of Barbara’s big strengths, her technological prowess, and limiting her with the Walkman was a nice touch as it leaves her to rely on her wits throughout the issue without the story taking any shortcuts like having her cheating by hacking a device or tracking a signal.

I’d also like to call attention to the riddles used in this issue, which I found to be effective, which is always has to be the hardest part about writing a Riddler story.

I find it interesting that both here and in the most recent issues of Nightwing, that the creative teams are playing around with the notions that both Barbara Gordon and Dick Grayson both seem to have each other in the back of their minds and are beginning to admit at least to themselves, that they have romantic feelings towards each other.  I can’t help but wonder if DC, having such great success in exploring Batman’s relationship with Catwoman, are planting seeds to do something similar with Barbara and Dick.  (Sorry Starfire fans).

I enjoyed the art, both by Minkyu Jung in the main story and yet another epilogue by Otto Schmidt and I found that both styles to compliment each other well.  This was an action-heavy issue and Jung handled the more kinetic sequences well, particularly the bell tower sequence.

Final Thoughts: This was a tight and well-executed issue.  I love this take on Riddler and I hope we see more stories like this in the future.