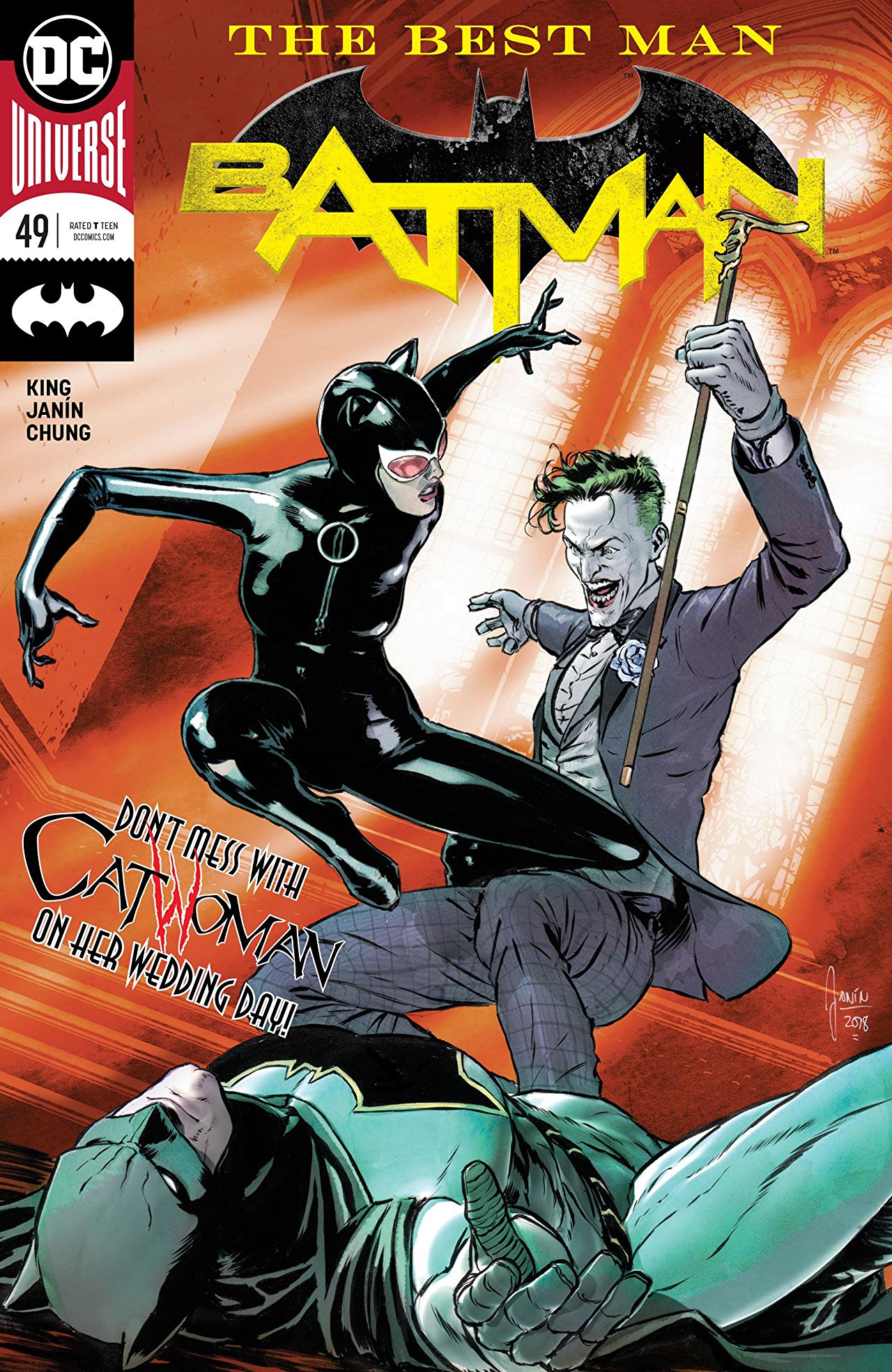 Synopsis (spoilers ahead): As Catwoman faces the Joker, he asks if she remembers the old days and all of Batman’s other villains. He notes that she never laughed during their battles with Batman. She chooses her moment to charge, and the Joker unloads his revolvers as she flicks her whip. Just as she claws his throat open, he shoots her in the abdomen.

Later, as they lay holding their injuries, trying not to bleed out, they exchange small talk about the other villains. The time drags on, and Joker asks if Selina can help him reload, so he can kill her. She politely declines.

Later, Joker brings up her lack of laughter again. She says that Batman was always better, and she only laughs when she wins.

Still later, Joker congratulates Selina on her upcoming marriage. They both dismiss the Riddler because of his sideburns.

Joker and Selina discuss the wedding details. Confiding that she stole her wedding dress, but hasn’t told Batman. Joker hopes to see her…buried in it.

Selina claims she knows Batman much better than the villains. Joker is very offended since he regards his chaos vs. Batman’s order to be fundamentally meaningful – causing Batman pain is knowing him intimately. But Selina knows that Batman wants a little happiness. Joker says that if Batman gets a little joy, he’ll stop being Batman.

After hearing Selina tell a little joke, Joker decides it’s time to try to kill her again, to save Batman from her. Letting go of his throat, he reloads and tries to shoot, but falls over from blood loss.

Later, Batman manages to wake up, telling Selina that Joker paralyzed him. He asks what the Joker wanted, and Selina laughs…

Analysis: Tom King follows up his Joker monologue to a silent Batman with a dialogue between Catwoman and Joker. Just as in the last issue, King’s Joker is hauntingly perceptive and horrifically evil. For the first time in a while, though, we also see Selina’s thoughts on her marriage and place in Batman’s life. She struggles with not knowing how to arrange the details of her wedding and hasn’t told Batman that she stole her wedding dress. The ending of this issue holds three overlapping meanings – first, that Joker might have gotten what he wanted – stopping the wedding so that Batman won’t be happy and give up his war on crime. Second, that Selina may have been poisoned by Joker’s toxin. And last, that Selina only laughs when she wins – but that introduces a whole other question – if she has won, who has she defeated? Joker? Batman? Or herself?

Mikel Janin draws this issue with deep blacks and clear facial expressions. The dense panel layouts allow the long dialogue in this issue to maintain visual interest, and a lot of emotional impact. June Chung stands out with her cold, grey colors, as the entire issue takes place inside the church. Tiny flashes of color like the stained glass window are cold and desaturated, while the thick reds of blood and Catwoman’s glasses trend into black against the Joker’s ghastly paleness. A truly standout issue for the art team, and hopefully Janin will continue to provide pencils for the book after issue #50, to provide that elusive sense of visual continuity so hard to maintain in a double-shipping issue.

DC has so far refrained from any real spoilers. The majority of commentators online seem to be expecting King, known for his tragic twists, to pull the rug out from under Batman and Catwoman. However, King has lied to us before, concerning the answer to Catwoman’s proposal – so there are a few of us (this reviewer included) who hold out hope that somehow, someway, there’s a place for a Batman who is married to Catwoman. Two weeks will tell all.

Final Thoughts: Catwoman and Joker walk down memory lane, after they both gravely injure each other, and the Joker reveals his true reason for trying to stop the wedding.