Review: Batman: Sins of the Father #5 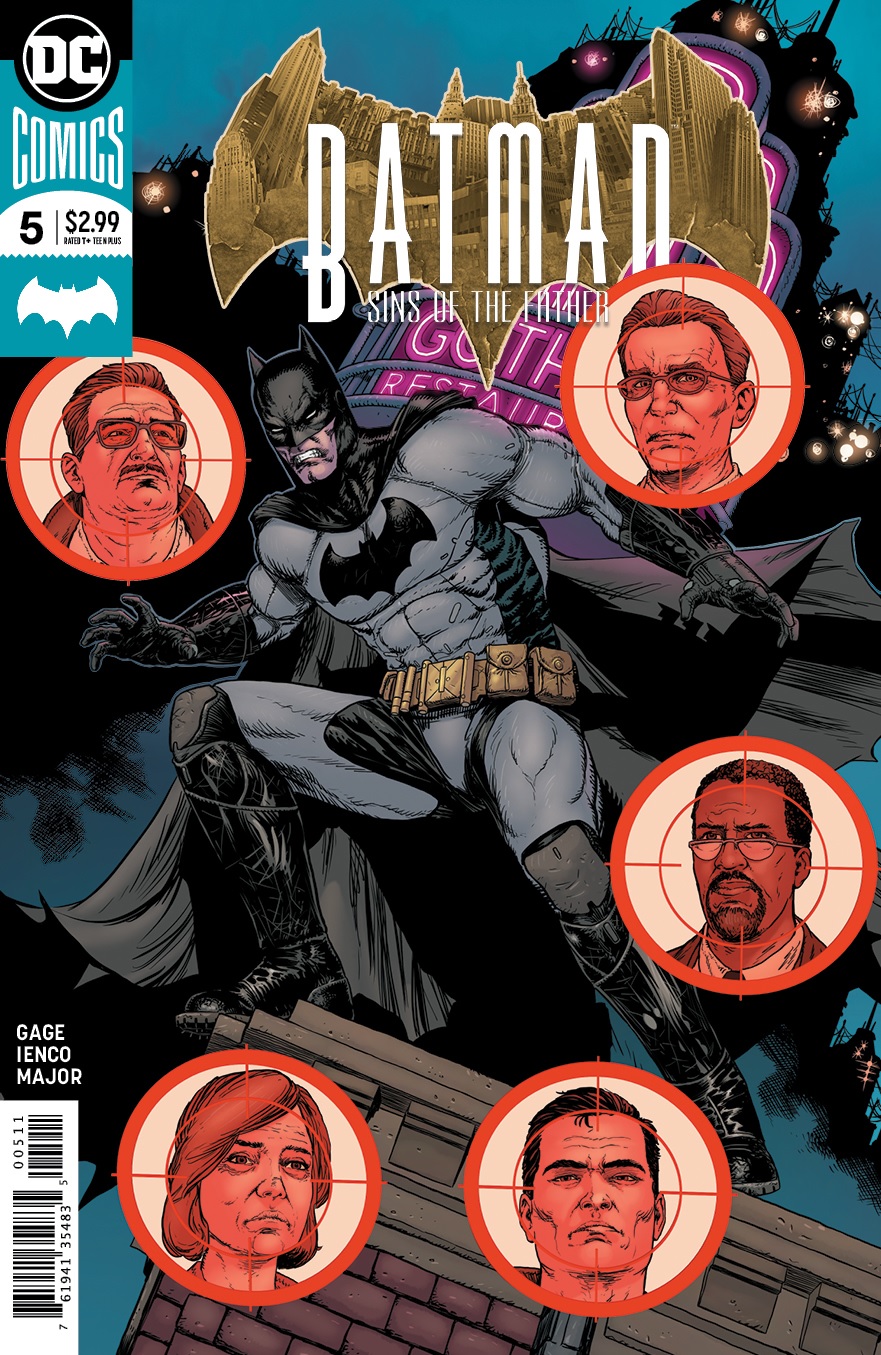 Overview: Deadshot escalates his attack on Bruce Wayne and all those involved in the events at Arkham Asylum leading to potentially explosive consequences.

Synopsis (spoilers ahead): The issue begins with Commissioner Gordon racing to the top of the GCPD because someone has turned on the Bat Signal. Gordon finds Batman waiting for him on the roof with a message: Gordon is in danger. Deadshot has promised Bruce Wayne that he would go after all those close to him and that puts Gordon in the cross-hairs.  Gordon assures Batman that he’s safe as long as he stays at the GCPD and encourages Batman to protect Wayne and the others.

We next see a scene where Bruce is talking to Lucius and Regina at Wayne Enterprises. He’s assured them that they will have armed protection to ensure their safety. They are both thankful for the protection and assure Bruce they have faith in him to do the right thing.

As we jump to the Batcave, Bruce and Alfred are using drones to monitor Floyd Lawton’s estate to track any movements in or out of the house. During this time, Bruce reveals to Alfred that he sees the butler as the man who raised him and views him as more of a father than Thomas Wayne. They’re interrupted by a video message of Deadshot who snuck out of the estate without being noticed. He threatens Bruce that he has all those guilty of assisting Thomas Wayne in his crimes and will kill them all.

Batman races into action and manages to save Regina from her car which had been rigged with explosives. He then heads to GCPD and prevents Deadshot from firing a missile at the station. A fight occurs and Batman unmasks Deadshot to learn that he isn’t Floyd Lawton at all, but rather Jack Burnett, a former enforcer for Falcone. The distraction kept Batman away from Wayne Manor where the real Deadshot begins burning the house down with a flamethrower. Alfred springs into action and shoots at Lawton before engaging in fisticuffs. Deadshot appreciates Alfred’s skills but the older man is no match for Deadshot who gets the upper hand and gets Alfred to surrender.

Batman is too late as Alfred has been taken. He tracks Deadshot to a building owned by Lawton’s company, which is being patrolled by former employees of Falcone. It seems as if the vacuum left by the mob boss’ death has been filled by Deadshot. Batman easily takes out the guards and makes it to where Deadshot is keeping Alfred as well as several other hostages, all of which he has deemed guilty of assisting in the crimes of Thomas Wayne. Deadshot encourages Batman to stay back by revealing that Alfred is wired with explosives and Lawton has the detonator in his hands. The issue ends on this cliffhanger.

Analysis: After the exposition-heavy last issue, this chapter in the storyline really kicks into high gear as Lawton finally makes a big play against Bruce Wayne. Before now Deadshot would attempt to take out one or two people, here now he has all his intended victims gathered in one place. We know that Deadshot blames Thomas Wayne for stealing away the life that Lawton could have had if he was free of his parents and this allows us to follow the logical path to his blame being twisted enough to include all those associated with Thomas, and by extension, Bruce. Oftentimes we get a very vague motivation for the actions of villains in Batman stories, sometimes they’re as simple as wanting to watch the world burn. Here we are given a villain who is deeply bitter, who is a version of Bruce Wayne without the love and guidance of Alfred. It makes the motivations deeply personal for both Lawton and Bruce which is played out in the actions taking place this issue.

This issue also highlighted the competency of not only Batman but all those around him. Gordon is quick to point out that he’s safe as long as he continues to do his job and for Batman not to focus attention protecting him. Alfred is no slouch when it comes to holding his own against Deadshot. Meanwhile, Deadshot himself is able to outmaneuver Batman thanks to the use of body doubles. Everyone is at the top of their game which keeps the issue moving at a brisk pace. With the next issue being the climax, we’re left with a cliffhanger ending. Although we know thanks to Batman: The Enemy Within that Alfred survives the encounter, I wouldn’t be surprised if not everyone currently captured by Lawton makes it out alive.

Once again the art and writing of the issue continue the trend of going above and beyond what is expected out of a tie-in miniseries. Christos Gage and Raffaele Ienco make a great team with Gage’s inner monologues of Batman a particular highlight in this issue. The facial expressions, drawn by Ienco, also highlight the anger and pain experienced by quite a few characters this issue; his attention to detail continues to be a highlight.

Final Thoughts: The penultimate issue of the miniseries sets the stage for one heck of finale by giving us a believable motivation for the actions of Deadshot. The ghost of Thomas Wayne looms large over all the characters and I can’t wait to see if Bruce is made to pay for his father’s sins.