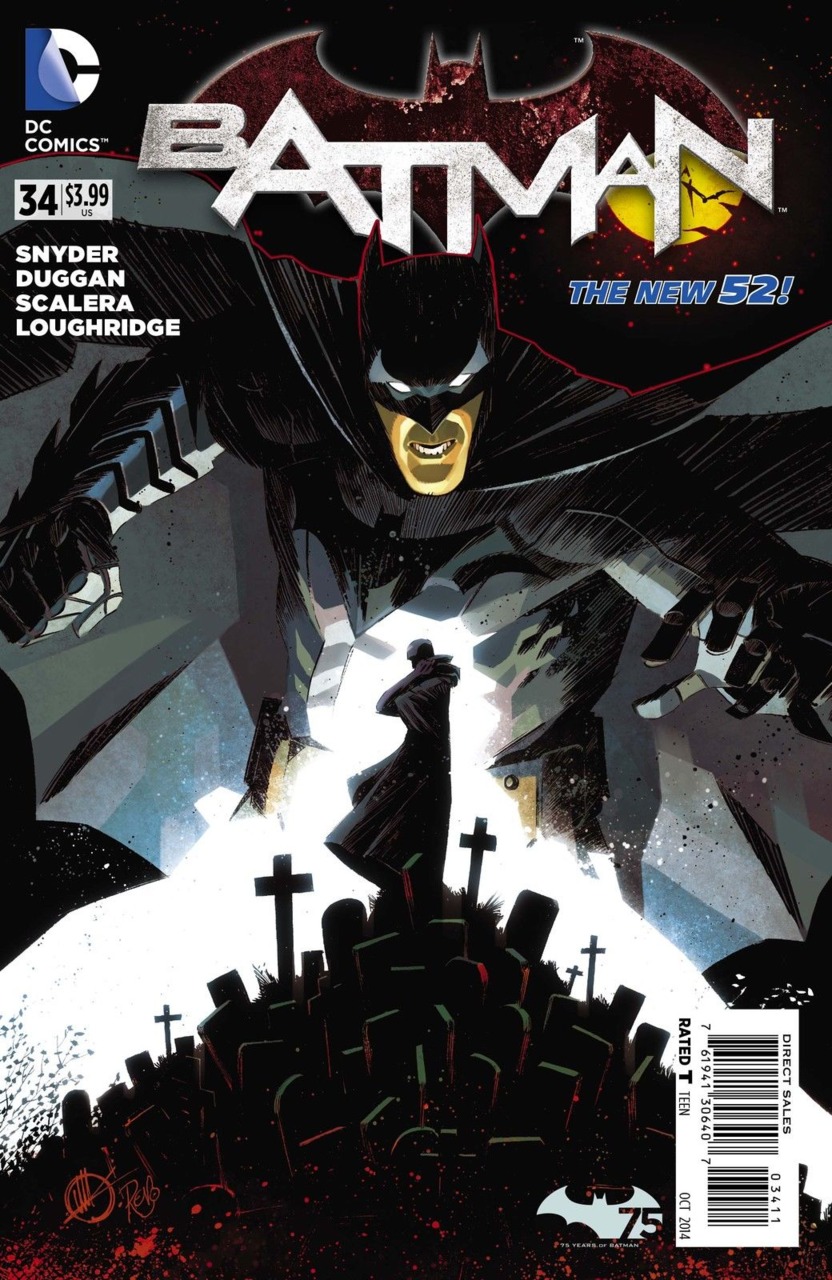 Zero Year is finally over and Scott Snyder gives us a little break by letting a few other guys take care of Batman this month. So instead, we get an awesome one-shot by Gerry Duggan (current writer for Marvel’s Deadpool & Nova) and Mateo Scalera (current artist of Image’s Black Science).

Duggan really flexes his muscles here, showing us that he can tell an impressive story in a single issue. The guy drops us right in on the action. He doesn’t give us an overload of information, but doesn’t make you feel shorted out, either. There isn’t really much action here, at all. Duggan builds through to the climax with horror, suspense and good old fashioned detective work. Reading this has me excited for Duggan’s upcoming Arkham Manor and what it is really about. If you’re wondering if you’ll like that book, READ THIS BOOK.

Mateo Scalera blows you away from page one. His striking visuals may remind you of Sean Murphy. He’s been know to draw two monthly books at the same time, meeting all his deadlines. Point being, the guy’s a beast. He cuts loose when drawing, which gives his art this raw, organic feel that looks amazing.

Lee Loughridge is on the colors and as one if my favorite colorists, his stuff looks freaking amazing. He compliments Scalera in all the right places, giving it a dark and eerie feeling in the beginning, all the way to the beautiful autumn tones in the daytime scene.

Page one – we see a woman about to go to bed, when she hears something in the other room. She walks in to find that her cat is dead inside a fishbowl, as a man wearing a hat puts a string around her throat.

The next day, we see the man working at his job of digging graves for unclaimed bodies. When he sees that his boss falls asleep, he goes over to his truck and pulls out the body of the woman he killed in the opening scene and buries her. As we see his truck, there are countless clothes, shoes and other items belonging to his past victims.

Batman contacts Dr. Leslie Thompkins, warning her of a man who seems to be targeting patients of hers and tells her to warn as many of them as she can. Batman catches us up on the main points that are happening in Eternal, as this is taking place right in the middle of it, but that he is dedicating this one night to stopping this killer.

Our killer next takes out a homeless man underneath an overpass that Batman is going over. A dog has caught the whole thing and Batman later uses the dog to follow the man’s scent. We see another patient of Dr. Thompkins, as she calls him to warn him of the danger, but immediately, we see the shadow of the killer in his room.

Then the dog leads Batman to this man’s apartment and as he goes through the room searching for clues, he finds a few prescription bottles with Dr. Thompkins address on them. Leslie is still calling her patients, when she is attacked by the killer, only it’s not Leslie… It’s Batman using his Digital Mask (man, that thing has come in handy). The killer claims that everyone will forget about him, just like they forgot about the people he killed. So Batman takes him to Arkham and locks him inside Joker’s cell so that he won’t be forgotten.

Batman heads to the Potter’s Field because of the mud on the killer’s truck and has the GCPD dig it up. Batman shows up and when Bullock tells him he doesn’t have to be here, Batman says he needs to see. Feeling guilty that he couldn’t save all these people, as we see a pile of bodies forming a giant skull.

Great single story. The only things that bugged me a bit were how differently Batman and Bullock’s relationship are here than they are in Detective. But I liked this better, as they don’t really like each other, but they respect one another and will work together. Also, Batman goes to Arkham. It’s weird to think that he went there, in the midst of Eternal and didn’t help out Batwing & Corrigan. HE WAS RIGHT THERE.