Review: The Brave and the Bold: Batman and Wonder Woman #5 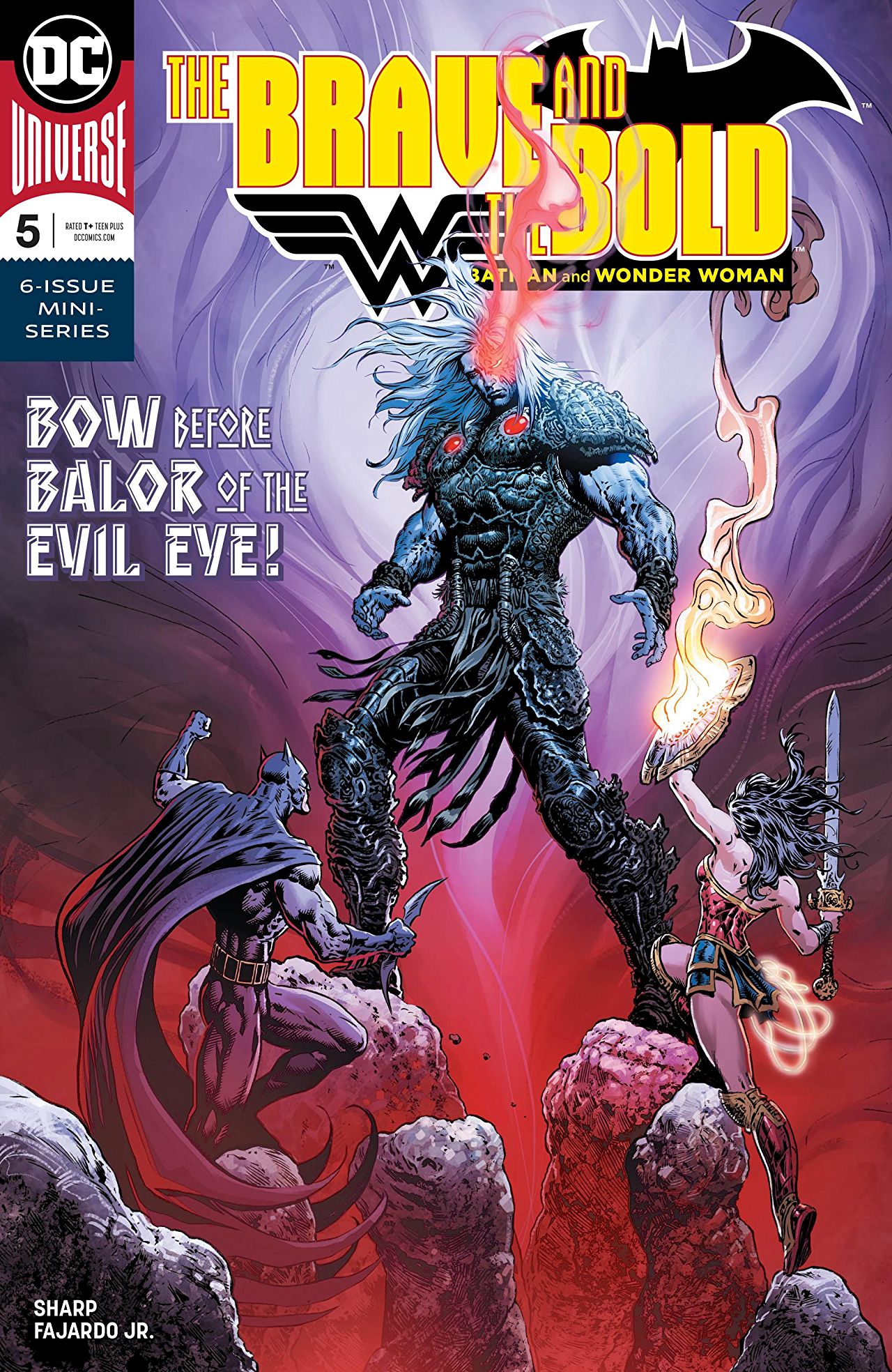 Overview: Bruce and Diana uncover the true mystery of Elatha’s murder, and their findings have great consequences for both Earth and Tír na nÓg.

Synopsis (spoilers ahead): We begin where we left off in the last issue: the Fomorians and the Tuatha Dé Danann are on the path to war. Diana tells the group to give Bruce and her one more day to investigate who murdered Elatha and who stole the Silver Arm. If they should find nothing the next day, then they would leave Tír na nÓg and their people to their own devices. Cernunnos agrees and lets the investigation continue.

After leaving the court, Diana asks Cernunnos if there is any other way the Sídhe (all the faerie folk) could leave this realm. Cernunnos reiterates that only he has the power to cross dimensions. He shares that there are spells that can send trinkets between worlds, but this practice is rarely used, and if so, then by the mischievous. Bruce tells Diana that they need to talk to the Dé Danann boy again. She reminds him that the golden perfect proved the boy’s innocence. Bruce agrees but adds that although he may be innocent, he definitely is withholding key details about the case.

Bruce enters the room where the boy is located. He asks him when he entered Elatha’s chamber, was he already dead? The boy responds with no; when he knocked and received no response, he placed his ear to the door and he heard him laughing – to the point where he was hysterical. He shared that when he did enter, all he could see was him laying on his bed. Bruce asks whether he thought this behavior was out of place. The boy responds that it was unusual and he shared this with Captain Furf. Bruce presses and asks if Elatha ever spoke during his observation. The boy responds that Elatha did: he exclaimed “Thank the Lord! All this time, and I was right!”

While onlooking the countryside, Bruce tells Diana that there was no murder – at least not of the king. He also shares that there is much that Captain Furf neglected to tell them. He goes further to state that the man the boy saw exclaimed: “Thank the Lord!” This is primarily an expression used by Jews and Christians, but Elatha grew up in the tradition of the Celtic pantheon. He should have used “Thank Danu!” or “Thank the Morrigan!” Those would be the appropriate deities he should have responded with.

He states that in Gotham, there has been a druidic sect searching for a way into Tír na nÓg for many years. He always thought that their pursuit was harmless. Bruce now thinks that there may be some connection between Elatha and the druidic sect. He tells her that he has died once and came back to life (read Snyder’s “Endgame” and “Superheavy” arcs); would it be unfathomable for Elatha to have switched bodies with a man from Earth? He deduces that Elatha is in Gotham and plans to open the causeways so that those in Tír na nÓg can go to Earth.

Back in the Irish Quarter, a man in a red cape tells himself that Patrick should have been here. Patrick had spent his life in search of trinkets from Tír na nÓg. This man opens one of Patrick’s boxes and picks up the Silver Arm. He shares that it is now time; with the arm, he is now able to set his people free.

In the Great Hall, Diana explains to those convened that one can send not only dreams and spirits to Earth, they can also send silver objects. Cernunnos shares that with an object like the Silver Arm, with much power imbued into itself, one can open the causeways – but only from outside Tír na nÓg. He also responds that there is no way Elatha would be able to use it. The magic of the Silver Arm can only be used when it has become one with the host; thus, one would need to remove his arm. But, the Sídhe respect “the fullness of body”; Elatha would be committing heresy if he were to cut his arm off.

Elatha places his arm and the Silver Arm on the table. He asks the gods to forgive him, but this sacrifice is for the freedom of his people. At that moment, he amputates his arm and dons the Silver Arm. Now having control of the magic, he opens the causeways.

In Tír na nÓg, the Great Wall is crumbling. Balor knows that his moment has come: freedom is at hand. Balor marches with his army to the Great Hall in order to conquer Tír na nÓg and claim it for himself.

Bruce tells Cernunnos that he must return to Gotham. If the causeways opened a passage from Tír na nÓg to Gotham, then Gotham must have a protector. Diana elects to stay back and help fight Balor and his armies.

Analysis: The pacing of this issue was milestones better than the last. Though it is as dialogue heavy as the previous issue, the story allowed for the plot to advance and kept me engaged. I was surprised at how Bruce caught onto Elatha’s plans relatively quickly. How does hysterical laughter lead to Elatha’s grand scheme? The answer is: he is Batman.

It is nice to see how Liam Sharp incorporated the Patrick O’Schull subplot. He felt incredibly out of place in the previous issues; now, his arc makes sense. Elatha used this druid’s body for his scheme.

The art has been consistently great. If you have become turned off by this miniseries due to the brevity of dialogue, you should just read it to gaze upon the art. It is just so beautiful and detailed.

Final Thoughts: Great issue and I am excited to read the finale!