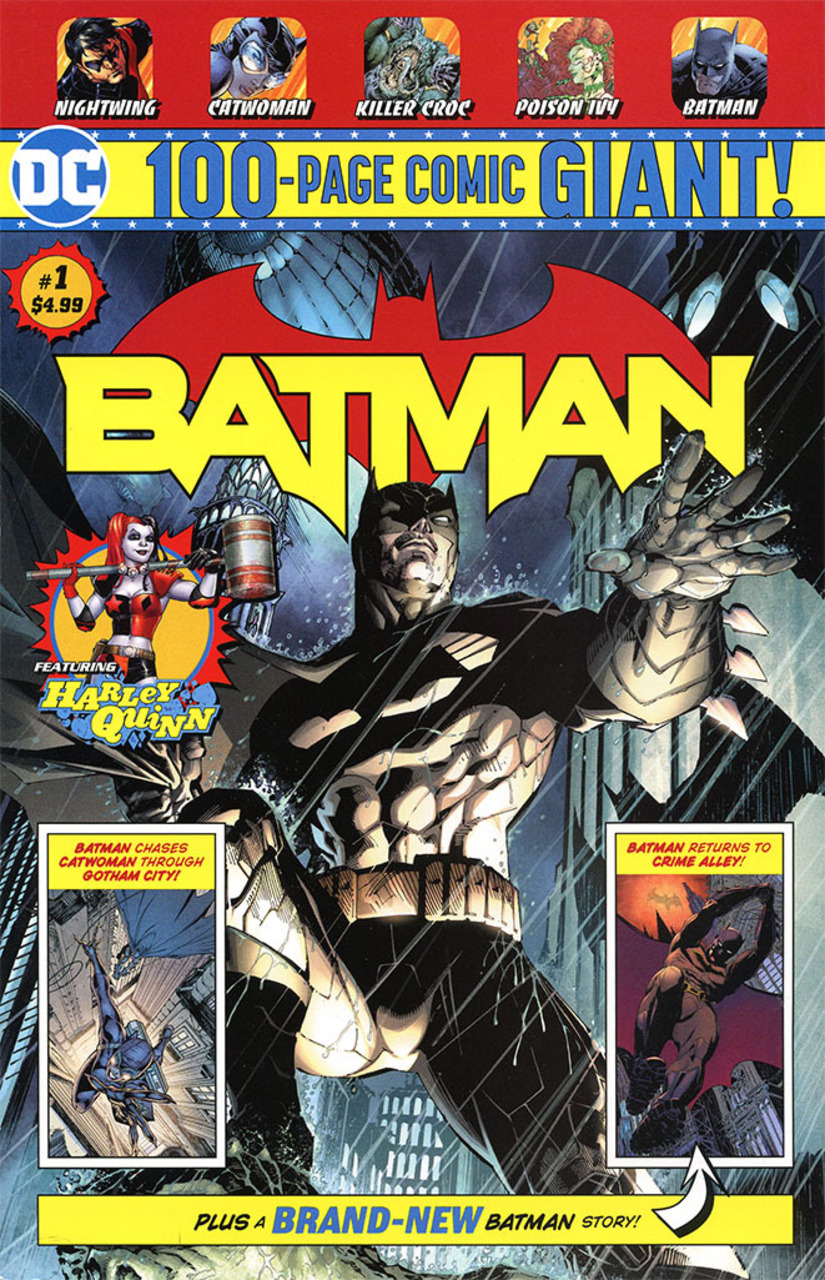 Editor’s Note: As announced last month, exclusive comic giants are available at over 3000 Walmart stores nationwide. While this is not available in comic stores or digitally, and it is unknown if it will be available elsewhere in the immediate future, TBU will review the original story found in the issues going forward since the stories told will be unique and not found elsewhere. Be sure to head to Walmart to find your copy before they are gone.

Overview: A kidnapping with eerie parallels to his own parents’ deaths puts Batman in harm’s way!

Synopsis (spoilers ahead): One More Chance, Part 1 of 2: With the Bat-signal gleaming in the sky, Batman swings over Gotham. Commissioner Gordon, on the rooftop, comments on Batman’s stealth, then tells him that the granddaughter of billionaires Mr. and Mrs. Thomas Giessen has been kidnapped. Though the Giessens paid the ransom, the girl Anna Giessen wasn’t returned. Batman leaves the rooftop as usual – before the Commissioner has finished, stealthily.

In the Batcave, Alfred and Bruce discuss the case, analyzing the types of kidnappings, and determining that this crime was most likely an inside job. Using security footage from Gordon, Batman identifies the head of security for the Giessens, Patrick Crown, as most likely suspect because of his evasion of security cameras.  Batman heads out to interview the family and staff.

During the interview, Batman learns that Crown has called out sick, but when he asks about possible perpetrators, Mr. Giessen becomes irate and leaves, offering a reward to Batman if he finds his granddaughter.

In Chinatown, Batman searches Crown’s apartment, then chases him across rooftops before felling him with a Batarang. Crown tells Batman he gave information to unknown blackmailers on how to enter the house but didn’t know they intended to kidnap Anna. Leaving the security man tied up on a rooftop, Batman and Alfred locate where Crown received calls from the culprits – Monarch Theatre, just outside Crime Alley where his parents were killed. Swept up in memories, he doesn’t notice a car filled with the kidnapping minions racing towards him intent on running him over!

Analysis: A few weeks ago, DC announced the launch of four new comic anthology series, exclusive to Walmart. “Batman: One More Chance” is the first exclusive story as an incentive to longtime comics readers, while the first issues of “Batman: Hush,” “Nightwing: Traps and Trapezes”, and “Harley Quinn: Hot in the City” will give readers new to comics several starting points for popular recent stories. Priced at $5 a magazine, that’s three full reprinted issues and one 12-page new story, it is quite an excellent deal.

“One More Chance” serves as part one of a two-part story, giving DC two issues to test the market and adjust their printing and distribution model for the really big news revealed – veteran Marvel writer Brian Michael Bendis, recently signed as a DC exclusive, will write his first Batman story for DC in these Walmart exclusive Giant issues, starting with issue #3, and running for twelve installments (art by Nick Derington). In this issue, Jimmy Palmiotti provides the writing, Patch Zircher the art, and John Kalisz colors (recently seen drenching Gotham in neon blues for the pencils of Javier Fernandez in James Tynion’s Detective Comics run). Of the three original stories read (a Wonder Woman story by Tim Seeley and Rick Leonardi in “Justice League of America Giant” and a Superman story by Palmiotti and Tom Derenick), Zircher and Kalisz provide the most stylish look, with plenty of dark, atmospheric panels, even if Batman’s chest insignia seems to waver between designs sometimes. Palmiotti seems to be working through the “best of Batman” checklist for writers – swinging from the rooftops, Commissioner Gordon on the roof, Batcave deduction, dangling witnesses off rooftops, and of course, the obligatory retelling of Batman’s origin (taking up two of the 12 pages). Hopefully, the next issue will branch into a bit more exciting territory, though the writing and art carry through these expected beats with polished skill.

Final Thoughts: A strong, if standard beginning to this Batman tale.