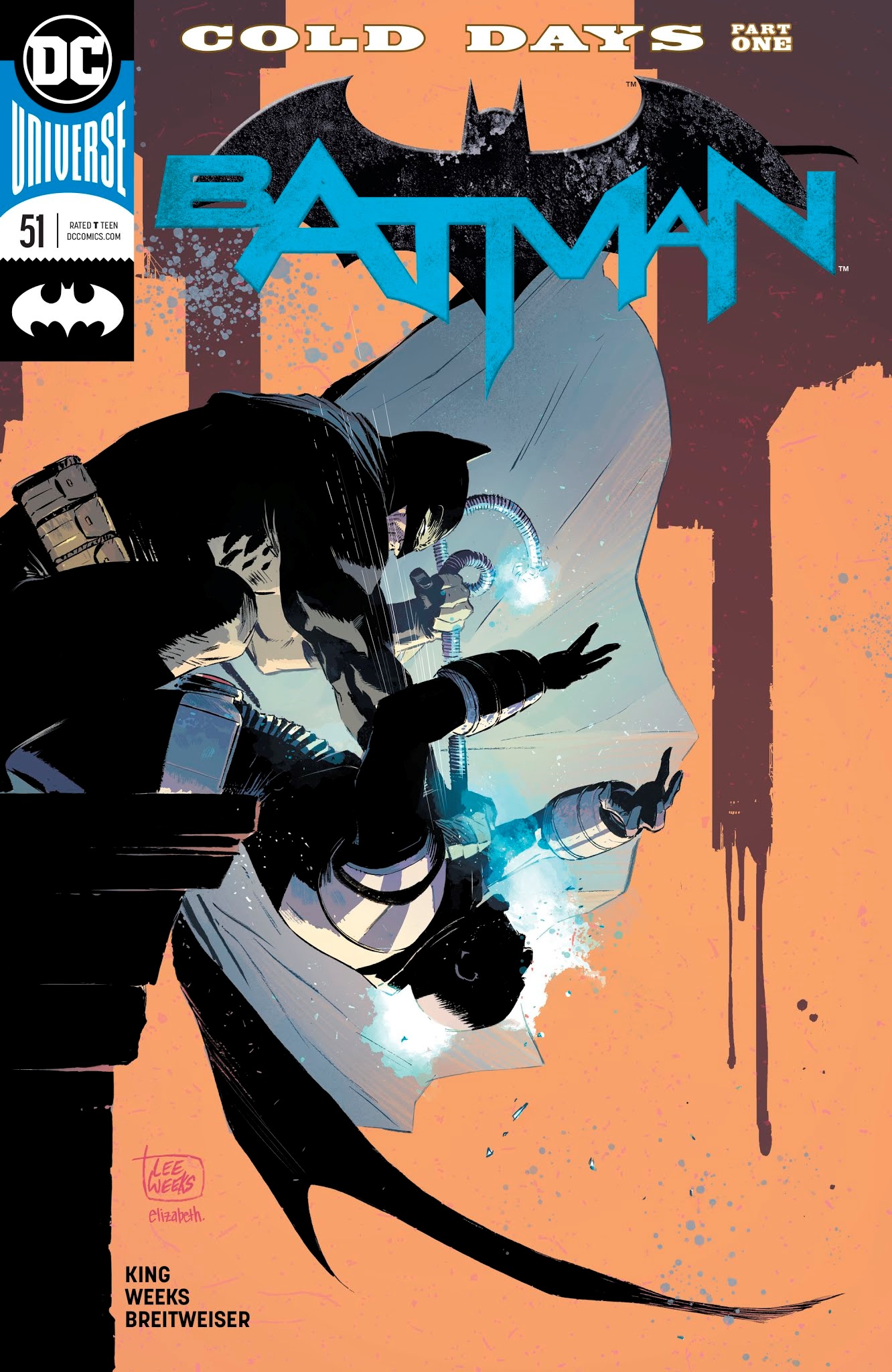 Overview: In the aftermath of Catwoman’s departure, Bruce Wayne sits on the jury of a case in which Mr. Freeze claims Batman beat a false confession from him.

Synopsis (spoilers ahead): At Gotham South Court, Bruce Wayne gets out of his limo, headed to jury duty. He remembers the face of Mr. Freeze, currently on trial, as he beat him savagely while acting as Batman. Reporters crowd around him as his heads inside the courthouse. His fellow jury pool members whisper about him, as he continues to remember his attack on Freeze.

During jury selection, the defense asks Bruce how he feels about Batman. He says Batman is complicated, part of the city. The lawyer presses, asking the nature of his association with Batman. We don’t hear Bruce’s answer, but the DA and prosecution approve his selection. This particular trial requires a sequestered jury. As Bruce steps into the jury room, one of the other jurors asks why the room is so cold.

In the hotel room, Bruce sits, then paces, sleepless, as the Bat-signal lights up the night.

On the roof of the GCPD, Commissioner Gordon greets Batman but knows that it’s not Bruce, but rather the “other him” – Dick Grayson. He asks if Batman is all right, to which Dick responds, “No.”

The defense lays out the case for the jury – three dead women, originally thought to have died from random blood clots in the brain – until Batman examined them. Commissioner Gordon, being cross-examined, against his will, admits that Batman is not licensed to perform autopsies.

While fighting Killer Croc, Dick leaves a message for Bruce, trying to express his concern and find out how Bruce is doing.

In the cafeteria, the jury complains about having to serve jury duty, one of the members blaming it on Batman. Bruce excuses himself to the restroom, where he violently destroys a urinal, ripping it from the wall and hurling it across the restroom to smash into the other side, screaming out his pain.

Detective Bullock tells the court that Batman left Freeze with a note pinned to his chest, reading, “He did it. Ask him.” On the stand, Freeze admits to confessing after the doctors revived him from Batman’s beating. He says that Batman was different, refusing to accept innocence, hitting him until he confessed to avoid death. Bruce looks down, holding his chin in his hand.

As the jury deliberates, the foreman opens the votes, the majority of the jurors siding with Batman over Freeze. Almost everyone raises their hand with a vote of “guilty,” but as the foreman double checks, he sees that Bruce alone is raising his hand with a “not guilty” vote.

Analysis: In the classic jury film 12 Angry Men, director Sidney Lumet used a very effective visual trick to increase the dramatic stakes. The film starts with the camera primarily looking down at the twelve members of the jury, giving the viewers the connotation of objectivity and control, but as the jury spirals out of the tidy expectation of a “guilty” verdict, the camera descends below the eye-line of the actors, creating the impression of tension, confinement, and argument. As 12 Angry Men still serves as the most powerful and recognizable template for a jury-focused drama, Tom King’s borrowing a few elements from the classic film highlight his seriousness and care in crafting his first post-wedding-destruction issue. The first element borrowed is the framing of the jury first from a completely overhead, bird’s-eye shot, showing the tops of each juror’s head. The second appears in King’s choice to invert the sweltering weather which causes the jurors to sweat profusely in the film – in this comic, the jurors repeatedly complain about the cold of their room (which also fits with the defendant, Mr. Freeze, and possibly hints that all is not right with this trial). Lastly, Henry Fonda famously begins as the lone “not guilty” vote in the film, and Bruce takes that role in the final panel of this comic, hesitantly raising his arm as the only person to doubt Batman’s detective work and righteous conviction.

To explore the two possible solutions to this mystery: either Batman wrongfully beat a confession out of Freeze, or Freeze is lying. If the former, Bane’s plan to break Batman (revealed in the last issue) likely involves Batman losing confidence in his ability to fight for justice. If the latter, it’s a bit more puzzling, showing Batman’s effectiveness even while in incredible pain. Since Joker, Anarky, Riddler, Hush, and Ra’s Al Ghul all knew about the upcoming wedding, it would make sense that Freeze also knew about the failure of Batman and Catwoman’s elopement, and uses this knowledge to escape conviction and possibly also further harm Batman’s ability to fight evil. There’s an outside chance that Batman is actually running wider plan, which combined with the frequent references to the cold of the room hints that the battle between Freeze and Batman may actually still be occurring during the trial.

Though clearly, Tom King has written a brilliant opening to this three-issue arc, the true stars of the book this week are penciller Lee Weeks and colorist Elizabeth Breitweiser. Weeks, who drew the lesser known follow up to Frank Miller and David Mazzucchelli’s incomparable Daredevil masterpiece “Born Again”, usually titled “Last Rites,” clearly evokes Mazzucchelli’s depiction of Bruce Wayne and Batman. The heavy lines marking Bruce’s chin going up past his mouth, the shaping of his eyes mimic the Bruce of Year One without slavishness, and the appearance of Batman both in flashbacks and in the present as Dick wears the cowl, makes heavy use of one of Week’s greatest strengths – negative space in the pure black of the cowl and cape, emphasizing the geometric shapes of the costume. King’s employment of repeated panels receives an upgrade under Weeks’ pen, as each repeated panel (for example, on the final page, as the foreman polls the jury) receives individual variation in detail, instead of the commonly used “statted” panel, where the panel or portion of panel is copied with variation in lettering or silence to indicate a drawn-out effect in time.

Not only does Weeks bring incredibly use of line and shape, but he brings a masterclass of drawn “acting.” Bruce’s facial expressions and body language tell a huge part of the story, and Weeks gives it to the reader clearly, both dramatically, as in the powerful restroom destruction, in which Bruce’s power and his pain both shine from the page, and in the final panel, where Weeks perfectly captures the hesitation and confusion in Bruce’s raised hand. Additionally, the integration of the flashback panels never confuses the reader, but puts them into Bruce’s emotional state, showing us the attack on Freeze from Batman’s perspective (as opposed to an objective, third-person view), replaying the events leading to Bruce’s current circumstances over and over again. Whatever the outcome of this arc, Weeks’ participation alone makes it worth the price of purchase.

Elizabeth Breitweiser, known recently for her collaboration with Ed Brubaker and Sean Phillips on several series, including the recently concluded Kill or Be Killed for Image Comics, brings the same subtle, noir-inflected coloring – again influenced heavily by the rich subtlety of Richmond Lewis’s coloring for Year One. Instead of over-rendering the shading as many modern digital colorists do, Breitweiser uses primarily two layers of color to indicate shadow (apart from pure blacks). The shapes selected to show the play of light across faces and rooms and Gotham City itself make the whole world more real, simultaneously both tangible and dreamlike in the slightly faded, watery effect of the colors. Slight effects like the semi-monotone images of the murder victims, and the zippetone dot-stippling effect in more subtle shading choices, simply underline just how important a colorist with a sense of restraint and artistry is to a comic.

Though this issue does not fully allay fears that King will avoid developing the conflict between Batman, Bane, and Catwoman, instead focusing on other stories for a time to increase suspense (and frustration from several readers), the “Cold Days” arc starts off on an incredible high, showing the sheer mastery of craft achieved by King, and especially Weeks and Breitweiser. The next two issues can’t come soon enough.

Final Thoughts: Bruce Wayne confronts how his emotional devastation affects his work as Batman in this heartbreakingly beautifully drawn and colored tale.