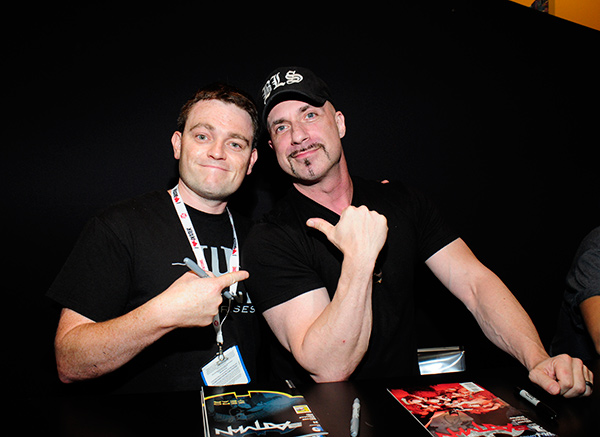 Recently TBU reported that the upcoming “Batman: Endgame” story arc in the pages of Batman would not be the last arc that the team of Scott Snyder and Greg Capullo would do for the title.  However a recent story from Greg Capullo’s spotlight panel at Baltimore Comic Con has garnered much speculation about just how long the team would continue on Batman. Initial reports from the panel said that Capullo would only stay on as the regular artist for the title for sixteen more issues which would presumably include the six-issue “Endgame” story followed by what would likely only be one other story given the length of the arcs we’ve seen from the creative team since the New 52 reboot in 2011.  Capullo also expressed interest in following up his time on Batman by working with Snyder to bring back his own creator-owned title The Creech.

However, after the conclusion of the panel, Capullo took to Twitter insisting that he had been misunderstood and that what he meant to say was that his contract on Batman was up in sixteen issues and that he and Snyder were considering options for the future including The Creech.

Additionally, Scott Snyder further explained Capulo’s comments in an interview he gave a few days later.  In the interview, Snyder insists that Capullo was simply musing about the future and that the team has no plans to necessarily leave Batman after Capullo’s contract is up.  Yet, even then, Snyder also remarked that he would go with his friend and partner were Capullo to leave the title.

“What he meant was that our contract — and we’re a team. Wherever Greg goes, I’m going to go and wherever I go he goes and we’ve made that pact both as friends because as hokey as it sounds, it’s just true, we’ve become extremely close. He’s one of my best friends, even though we started out not really liking each other on the book. We try now to go to cons together with our wives. So we plan on sticking around together, post-Batman, to do whatever we’re going to do together next, whether that’s creator-owned or Marvel or DC. It could be any of those things, whatever comes next. His contract is up in sixteen issues from where we are right now. That doesn’t mean that we wouldn’t sign on to do more. He was thinking out loud that, “Maybe we’ll do this, maybe we’ll do that.” The Creech is a series that he wants to finish. He feels badly that he didn’t finish it and he asked me If I would be willing to work with him on some of those issues and finish it or write it or whatever, and I was like, “Of course, man. I’d love to do that sometime.” So what got kind of construed as a plan to leave Batman for The Creech as an ongoing, wasn’t the case. That’s not what we’re talking about. I absolutely plan on doing that project with him and we might do it right after Batman or we might not do it right after Batman. We might do more Batman, we might go to Marvel, we might do our own creator-owned and do that on the side. We don’t know. All of this is stuff we’re deciding together, that’s entirely up in the air right now”

So, judging from the interviews, it does not seem like there are concrete plans either for the team to leave the title or to remain beyond those next sixteen issues.  The speculation alone may be significant, though, as Snyder and Capullo are members of a very small club of creators who have been on a main continuity DC title since the beginning of the New 52 three years ago* and Snyder has been writing the character of Batman since he took over as writer of Detective Comics in 2010**.  Given that, it may not be out of line to wonder how much longer the team will remain on the book despite it’s continued critical and financial success.  Additionally it is no secret that DC and the relatively new Batman group editor Mark Doyle have been making big changes to the tone of the TBU overall in the last few months with the addition of several new titles as well as a variety of other creative team changes***.  So, any change on the premier title for the group may simply be in keeping with the spirit of these new changes.

Either way, this whole discussion raises the question of what would the Batman title (or the Batman universe as a whole given Snyder’s creative role in orchestrating crossover events and Batman Eternal) look like were Snyder and Capullo to leave the book and the character to pursue other projects (which, I personally hope is only in the distant future).  And while the answer will greatly depend on who DC hired on as the new creative team, I’ll venture some speculation anyways.

First, I think it is likely that we’d see Batman take on a somewhat lighter tone.  In saying that, I wouldn’t anticipate Silver Age camp or a Batman of Burnside style redesign of the character, but I’m not certain that everyone’s favorite dark, brooding character would maintain the level of violence and darkness that we’ve seen during Snyder’s run.  Perhaps out of the ashes of Eternal and its aftermath, we’d see a stronger, more resolute Batman if not a happy, confident Batman.

Second, I would anticipate the return of shorter story arcs.  Snyder has been the master of long arcs and delayed story resolution since the beginning of his time on Batman in the New 52 with only a few shorter stories filling the gaps in-between the long arcs that were The Court of Owls, Death of the Family, and Zero Year.  With some fans still reeling from the fatigue of these longer arcs, were a new team to take over the title, I’m not certain that we’d see this trend continue  I believe that readers could expect shorter, more contained stories either as a result of this fatigue or out of deference to the skill of Snyder.

Third, a new creative team would likely come with a very different and distinctive art style.  Capullo’s art style has wowed readers since the first page of Batman #1 as an incredible variation on DC’s Jim Lee house style in the New 52.  But with profoundly different looks for Batgirl and Catwoman in their upcoming issues from their new creative teams and big artistic style differences for new titles like Gotham by Midnight, Gotham Academy, and Arkham Manor, I think it is a safe assumption that the book would get some kind of new artistic feel.

Lastly (and perhaps most importantly), I’ll also venture a guess as to who will succeed Snyder and Capullo when their tenure on Batman is over either in sixteen issues or sixteen years.  As far as artists go, DC has had ample offerings from different artists as part of the Batman Eternal story.  Personally, I’d love to see either Dustin Nguyen or Jason Fabok take over to fill in Capullo’s shoes when the time comes.  And when it comes to writers, I might speculate about either John Layman (who ended his time on Detective Comics earlier this year) or Tim Seeley (who has been involved with Snyder and others in the crafting of Batman Eternal).  However, I’d have to say that the odds-on favorite to be the next writer of Batman would have to be James Tynion IV.  Tynion is well-known as a student of Scott Snyder and a fill-in/back-up/support writer for Snyder’s Batman activities in addition to his own work on other TBU titles like Red Hood and the Outlaws and Talon. Moreover, Tynion isn’t currently writing a book of his own for the Batman family of titles or for DC as a whole.  In many ways, Tynion has been groomed for that very position.

So, all-in-all, while Synder and Capullo say they have no definite plans to leave Batman any time soon, the way in which this issue has been reported as well as their comments on social media and in various interviews does leave readers with questions and speculation about the future of the title.

*The other creators still on their titles for the whole New 52 time period are Geoff John on Justice League and Peter J. Tomasi and Patrick Gleason on Batman and Robin.

** Snyder remained on Detective Comics until the title was rebooted in 2011 at which time he moved to Batman.

*** For my thoughts on these tone change see this article.