Review: The Brave and The Bold: Batman and Wonder Woman #6 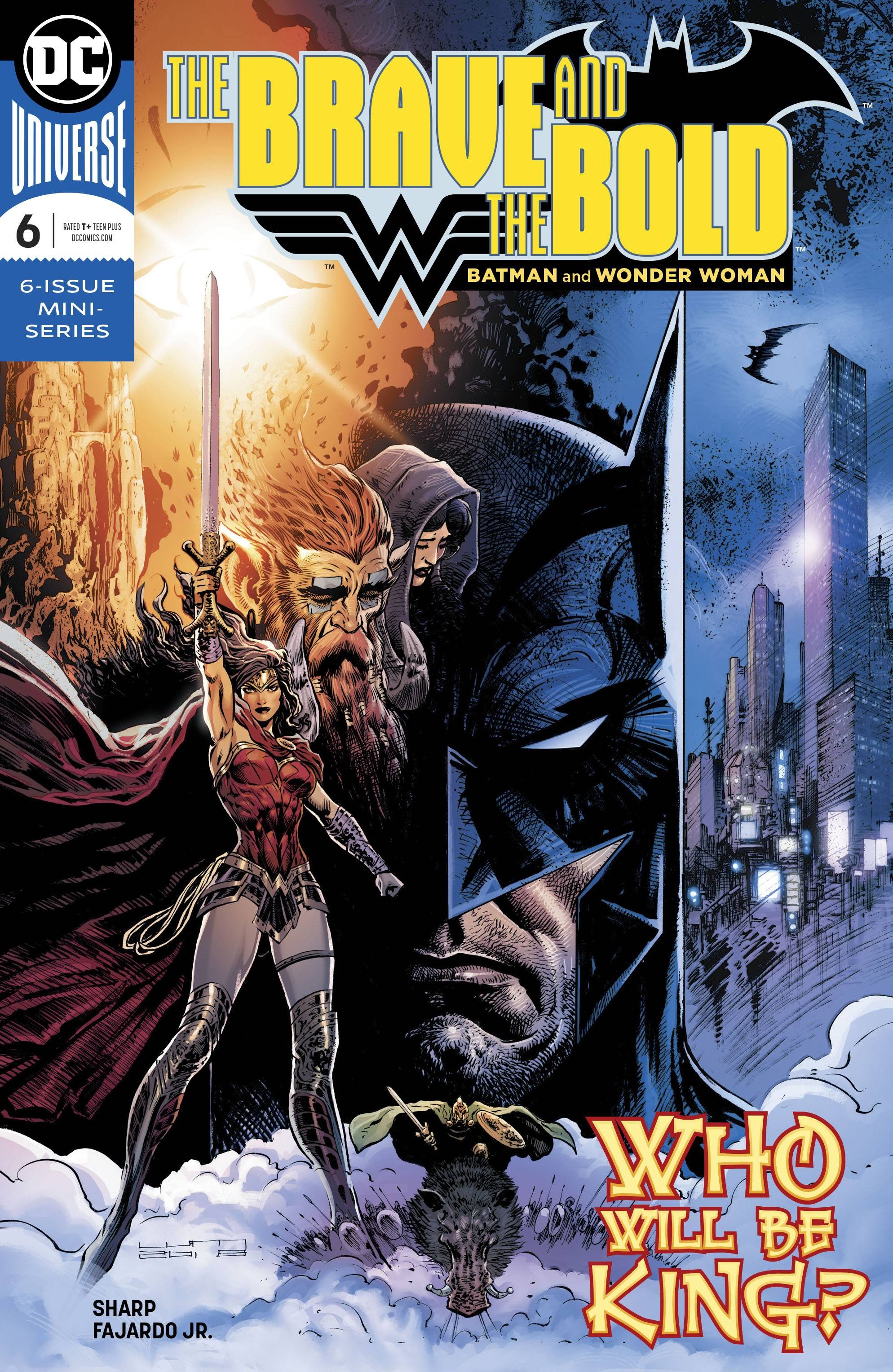 Overview: Diana and Bruce are the last line of defense for Tír na nÓg and Gotham.

Synopsis (spoilers ahead): With the causeways between Tír na nÓg and Gotham opened, Elatha tells Cernunnos that the faerie folk will soon be in Gotham. He also states that he should rejoice; they are free at last. Bruce, standing nearby, radios Alfred to send the Bat-plane to his coordinates.

Captain Furf stumbles into the castle bloodied and injured. Lying on the ground, Furf tells Cernunnos and Elatha that Balor is on a warpath, and he is headed their way. Balor had promised the people that he would either grant them freedom if they joined his side or death if they opposed him. Furf shares that he tried to mount a resistance but ultimately failed. He tells Elatha that Balor took advantage of his plan to open the causeways and use it as an opportunity to mount his attack. Cernunnos tells Elatha that what has happened; it is now Elatha’s responsibility to lead the defense against Balor.

In the Irish Quarter, Bruce calls out to Cernunnos to remove the Phooka visions that the Gothamites were experiencing. Cernunnos responds that he can do that and that Bruce needs to get the people to safety because Balor’s army is coming soon.

Elatha apologizes to his dear, dying friend, Captain Furf. Furf responds that Elatha has nothing to apologize for and he agrees with Elatha’s plan for freedom. Elatha, standing over his dead friend, vows that he will see Balor one last time on the battlefield.

Outside the castle, Cernunnos and Diana join the resistance fighters and, while fighting the enemy, plead with Balor’s forces to cease fighting. In an act of bravery, Cernunnos shoves Diana out of the way of an incoming spear. As the spear punctures his chest, Cernunnos’ turns to leaves, and his dry bones fall at Diana’s feet. In tears, Diana swears that “This Ends Now!” and flies away to end the conflict at its source.

In the middle of the causeways, Elatha confronts Balor. Balor tells Elatha that all he wanted was to come home, but both times he tried Elatha’s army turned him away. After these acknowledgments, they both attack each other with vicious, powerful blows.

In Gotham, Bruce tells Gordon that the sleeping gas had worked; he put to sleep all the faerie folk that had entered the Irish Quarter.

In the midst of Balor’s and Elatha’s fight, Diana punches Balor so hard that he is stunned. In anger and pain, he asks the mystery attacker who they are. Diana steps out from the flames and tells him that she is “Princess Diana of Themyscira, and Tír na nÓg is under my protection.” Balor attacks Diana with an incredibly powerful energy blast. With flames all around Diana, Balor walks away and an injured Elatha lies mere meters away from where Diana stands. She comes over and Elatha thanks her for her help in protecting Tír na nÓg. He inquires where his brother had gone, and she solemnly shares that he is gone.

In the forest, King McCool’s entourage tries to convince the king that they are heading in the wrong direction. McCool tells them that for some reason he is being drawn in this direction. He walks a little further and he hears something coming from the bushes. As McCool parts the bushes, he sees a baby lying in the leaves – a baby Cernunnos.

In the epilogue, Bruce tells Alfred that there will be an adjustment period due to the integration of the faerie folk with the people’s of Earth. Alfred inquires about Diana, and Bruce states that he does not know if she stayed or returned. He also questions whether their presence brought about any good. Alfred responds that because of their actions, the peoples of Tír na nÓg have their freedom. Bruce turns around and states that they imprisoned themselves for a reason, and there is something terrible that is trapped in that realm with them. He asks rhetorically what could be so terrifying that an entire nation would lock itself away from the world for eternity.

At that moment, Balor looks through the crack in the wall surrounding Tír na nÓg and sees a behemoth monster heading into the realm.

Analysis: Well, what an ending!

I will tackle the art first: this whole entire miniseries has some of the best art I have ever seen. Liam Sharp is so amazing, and each issue of this miniseries is most beautifully drawn. The detail is just incredible. With so many books these days delayed because of art (e.g. Doomsday Clock), it says a lot about Liam Sharp in that he can not only write and draw a book on schedule, but he can add this much detail and not ever be late. If there were contests for art in comic books, this miniseries would be my nominee.

I was reading a few tweets that Liam Sharp posted on Twitter. He was addressing some of his critics who complained about the pace of the series. I believe his critics did not appreciate what Sharp was doing. He dived deep into the Celtic lore and created a classic detective story. I believe people will enjoy this title more in trade form.

I was not expecting the book to end the way it did. At about the last five pages, I was wondering how this series would end. I felt that there would not be enough pages to end the series organically – no one likes a rushed ending. However, in the epilogue, it is revealed that this miniseries was part one of a grander story. I could not wait to review future issues of this series.

Final Thoughts: I completely enjoyed each issue of this series. The art is spectacular. The plot is deep and intriguing. The mythology is engaging and enlightening. It is a solid issue, and this miniseries is just great. Liam Sharp, great work!