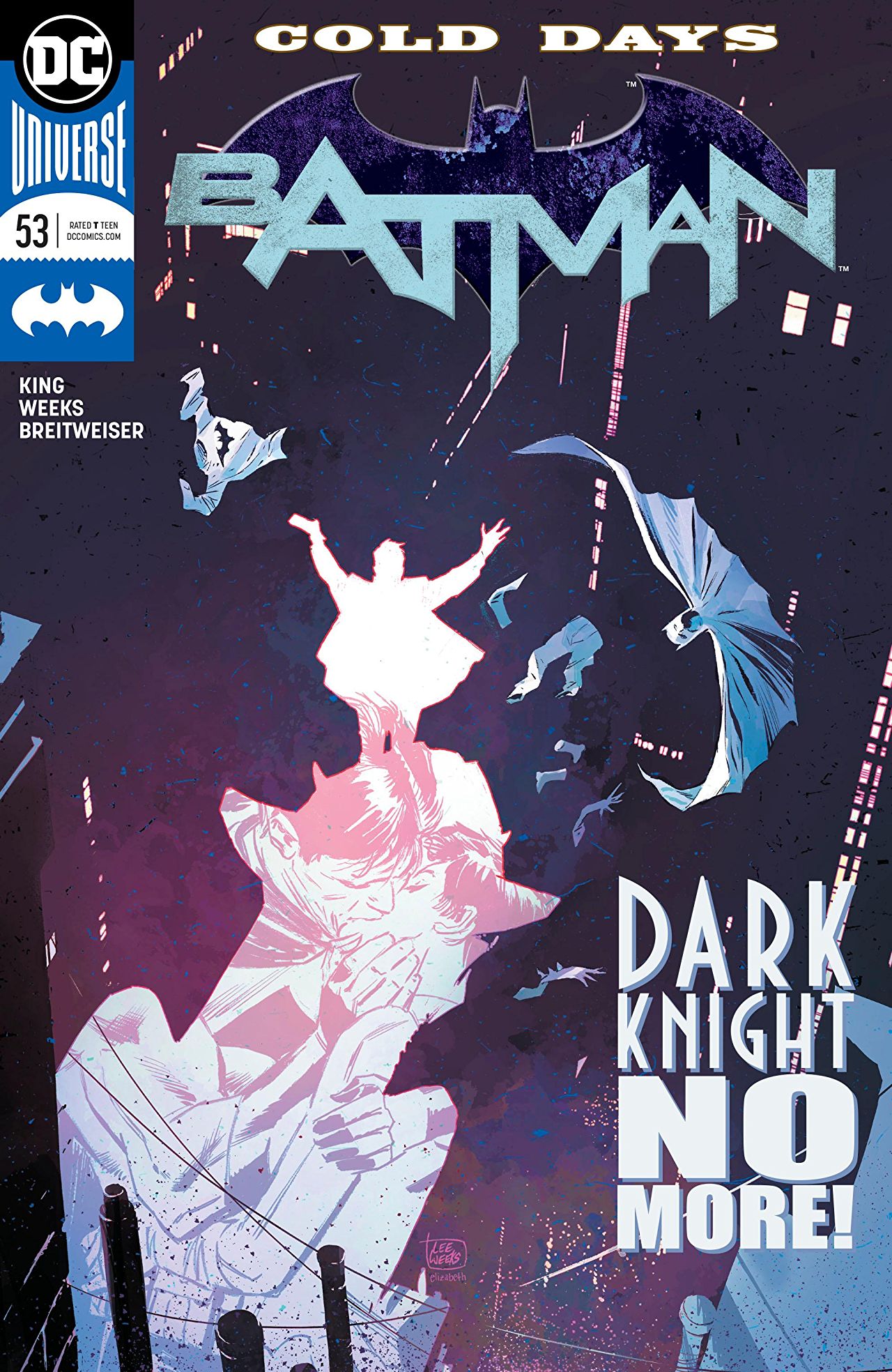 Overview: Bruce makes a final plea to the jury, but it’s not what you might expect.

Synopsis (spoilers ahead): As the jury members file back into the room, we hear Bruce talking to the jury member most critical of his attack on Batman, named Missy. He asks about her cross necklace, and she says she’s a believer, with 20 years attending church. Bruce attempts to make an analogy, starting with his father, a Christian who took him to church, telling his son all the stories. Later, when his parents were murdered, Bruce put aside belief in God. He vaguely refers to his training, as the pages show that training, though the jury obviously doesn’t know the truth. Bruce tells them that he returned to Gotham and found Batman, and images of the many, many fights Batman has had cover the page.

Missy, confused, asks if Bruce believes Batman is God. Bruce, defining God as infallible, responsible, determiner of life and death, say that yes, he believed Batman was God. He asks the jury members who owe their lives to Batman, and everyone, including himself, raises their hands. Batman gave them life, so he must be God, sitting above the city, wearing a cape.

But Bruce throws a wrench into the argument. He brings up the book of Job in the Bible – a righteous man, caught between Satan and God, testing his faith. Angry, Job asked God why, and God answered “I created the mountains and the miracles. And you’re questioning me? Who are you?”

Overwhelmed with emotion, Bruce sits silently for a while. Then he tells the jury members he was recently hurt, and images of the heartbreaking loss of his life with Catwoman appear. And when he lost his happiness, he waited for Batman to save him – and he’s still waiting.

Making his final appeal, Bruce says that Batman is good, and tries with every fiber of his being to be right, but he is human and fails. The jury is given a godlike power of life and death over Mr. Freeze – and Bruce believes that should give them humility. That if the jury can be like God, then Batman, who they believe is also like God, could in fact just be a man in a batsuit. He ends by saying that Batman erred here, and begs them to save him from his error.

Over images of the jury filing out, Alfred and Bruce discuss the result – not guilty. Alfred reveals that Bruce bribed his way onto the jury to prevent his error as Batman from corrupting justice as best he could. He tells Alfred that he’s going out, but in his old suit, to avoid memories of proposing to and then losing Catwoman. He says he’s lost and needs to remember who he is.

The issue ends with two verses from the book of Job – “Then Job arose, and rent his mantle, and shaved his head. He fell down upon the ground, and worshipped. He said, “Naked came I out of my mother’s womb, and naked shall I return. The Lord gave and the Lord has taken away. Blessed be the name of the Lord.”

Analysis: After a brilliant opening issue, a middle issue that went straight instead of an expected swerve, this issue serves as a solid and powerful conclusion to the Cold Days arc. Though a few details seem unresolved, like the coldness of the jury room, the final twist of Bruce finding out he made a mistake as Batman and desperately bribing his way onto the jury and convincing the members to acquit Mr. Freeze it still works solidly. Perhaps following up with his reference to St. Augustine’s foundational Christian theology in Batman #48-49, King uses the book of Job, with its powerful exploration of the problem of pain and human existence and what that means for belief in God, as the foundation for his examination of Batman’s response to the pain of losing his life with Catwoman. The final quote from Job is an intense look at the desolation of loss, and the attempt of a strong man with a strong belief to stand up in the face of a burning wind ripping away his entire life.

King’s said that Bane’s plan, revealed in Batman #50, is to break Batman emotionally. I still have my doubts about whether that makes a lot of sense since as King himself wrote, Batman is a machine turning pain into salvation for others – giving him more pain hasn’t seemed to really stop his determination to save others or fight evil, even within himself. So how will Bane achieve victory? Or is Bane simply satisfied with pulling the wings from his enemy, even if they regrow? We’ll have to keep an eye on the long game, as usual with King, but for now, I remain skeptical.

The stars of this issue, as they have been the whole arc, are penciller Lee Weeks and colorist Elizabeth Breitweiser. Weeks, continuing to provide the rich, clean but detailed and lifelike linework in the mold of David Mazzucchelli (Year One), really captures the personalities of the jury members, especially the religious and contentious Missy, providing a touching arc from her hostility towards Bruce in the beginning, to her giving him a hug in the end as they leave the jury room together. The flashbacks of Batman fighting villains show the pyrotechnics Weeks can provide, and one can only hope he’ll return, taking arcs between regular artists Tony Daniel (replacing David Finch) and Mikel Janin (one of the original artists on this Rebirth run). Breitweiser’s muted but still warm and vibrant color work captures the perfect melancholy mood of the book, like a world of vividness covered over by a layer of pain. The way she picks out the details on all of the jury’s faces in the 12-panel grid which brings Bruce’s argument to a close shows what simple, two-toned color choices can do, instead of a strongly rendered, overly complicated shading choice. Simple shapes, blots of light and shade, capture personality, emotion, and expression perfectly.

Next time, away from the confined nature of a room full of 12 angry jury members (completing the 12 Angry Men reference), veteran artist Matt Wagner illustrates a one-shot story about Bruce and Dick, father and son. Hopefully, despite the coloring controversy that’s been in the comics news, that issue will have a similar emotional impact as this one.

Final Thoughts: The first arc after the wedding that wasn’t, closes with a powerful expression of loss and pain, illustrated with stunning beauty.