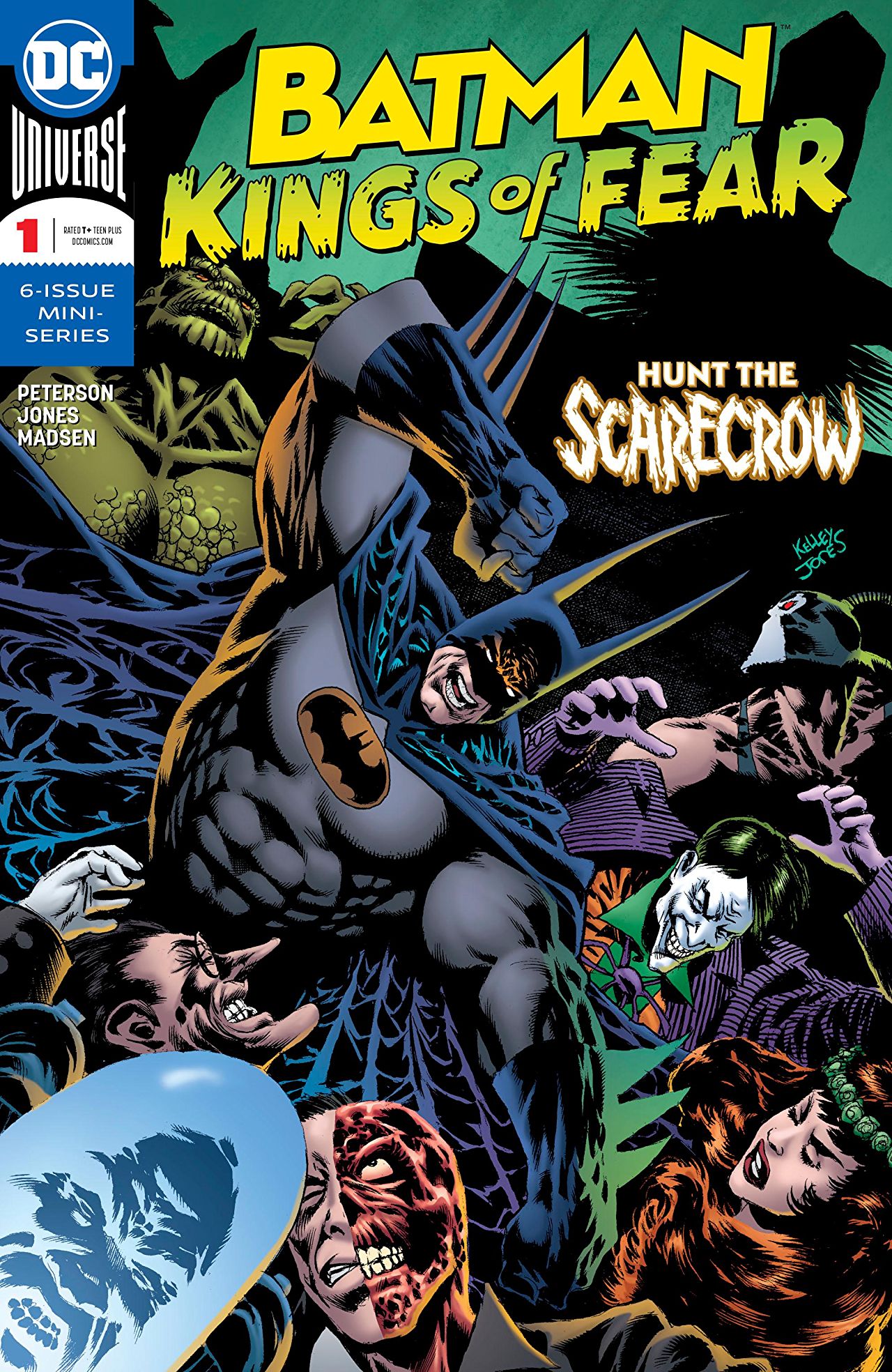 Overview: So strong my face is, You punch break fingers, Kick me, you’re limping, Stab me, you’re bleeding, I am be angerous now.

Synopsis (spoilers ahead): Joker and his gang are in a warehouse waiting for Batman to show up. He knows he’s there, he just needs a little coaxing – a little motivation. So, Joker calls their hostage over. He won’t hurt him unless he gets tired of waiting or he gets bored. Joker gets bored, and slices his throat open immediately. Batman leaps into action, taking out as many goons as quickly as possible. He puts pressure on the man’s wound and tells him he’s going to be alright. Batman takes Joker and straps him inside the Batmobile. The two go for a drive and Joker talks the whole time until Batman gases him, knocking him out when they are almost there. We also see GNN reporting about the warehouse incident and getting a statement from the hostage before Batman is even out of the city.

They pull up to their destination – Arkham Asylum. Batman asks him why, Joker responds “because”, and they go inside. A doctor stays behind and talks to Batman. She criticizes his methods saying he’s encouraging their behavior. He responds that he’s no more responsible for their condition than she is for not having them cured. The alarm sounds and he rushed to see what’s happening. A nurse is in a room all by himself and Batman asks him for information, but gets none because 1) he’s a babbling idiot and 2) Batman asks stupid questions and isn’t patient enough to hear the answer. He goes into the next room where he finds Joker, Bane, Poison Ivy, Two-Face, Mr. Freeze, Killer Croc, and when it comes to a brawl, the most intimidating one of all – Penguin. Oh, the Riddler is there too, but they forgot about him. Batman seemingly pills out a miniature EMP and shuts down everything, including Freeze’s suit (that won’t end well), and then beats them all with ease – even punching every single one of them in one punch. We then get one of the strangest splash pages I’ve ever seen of Batman posing with his villains concussed all around him.

The doctor chews Batman out more for his treatment of her patients. Another nurse approaches and tells her that Crane escaped and that he has a hostage. Batman hurries to the Batmobile, but Crane meets him there and gases him before he can react.

Analysis: Scott Peterson delivers the script for us here. Now, it’s not bad, but it’s not very strong either. The whole issue seems to be set up for the miniseries. I’d rather just throw this issue out and start the series with Batman already being gassed and hallucinating. The only theme established here that warrants carryover is maybe the discussion Batman has with the doctor, but that could be sprinkled throughout in flashbacks.

Side Thought: Batman uses Freeze’s freeze blaster after he used his miniature EMP. What’s up with that?

I thought it was strange that Joker’s hostage from the beginning of the issue was able to give an interview with GNN despite Batman being only a few blocks away. And, oh yeah, his freaking throat was sliced open! How could he even talk to reporters? Shouldn’t that guy be in the hospital?

Joker was annoyingly talkative. Way more so than usual.

Choosing the Riddler to brawl with Batman is laughable. At that point, he’s just cannon fodder. But then you forget to include him with the rest of the villains was confusing. Then you throw in Penguin to join in the fight as well?! You know what would have been more useful in a fight? A bowling ball. It’s the same shape, and at least you could have used it as an improved weapon. You know it could have been funny. Batman vs Joker, Two-Face, Bane, a bowling ball.

The fact that this issue has Batman take out eight members of his rogues gallery – including two that are strength based (Croc and Bane) – without taking a single hit or even breaking a sweat?! And then we are supposed to buy that Scarecrow is going to be a problem for the next five issues? His finishing blow was punching everyone, and by that – I mean knocking them all out IN A SINGLE PUNCH.

I’ve never seen Kelly Jones sequential art before this. And I always felt like Dustin was a bit harsh but now I understand. However, I’ll start out with the good. His storytelling is well done. He finds an interesting camera shot multiple times throughout this book. His panel layouts are interesting, though at times panels bleed into each other to the point where it’s hard to follow. One page in particular, that’s intentional. But there were several other times where it became a difficult task. The linework reminds me a lot of Eduardo Risso, but there is more of a dramatic flair to his work here. The art is inconsistent. One minute, Batman is this hulking man, standing well above everyone else. The next, he’s this short, thick little man, while still having muscles on top of muscles. Really, I don’t know how this Batman moves with the muscle mass that he has – and boy, does he move. I think a past time of his is posing in front of the mirror to see what looks the coolest to a six-year-old. His body can perform amazing feats by bending in ways where they should be broken, but they aren’t. I’m done now. That is all.

Michelle Madsen does a fine job of coloring. I’ve never (consciously) looked at her work before, but she has a unique flair to her work. The way she plays with lighting around the edges of the character makes for a cool effect. It’s not a realistic feel, but it’s pleasant to look at. She does a large rainbow type look which adds a nice balance of color to each page. Her colors are typically bright, but she balances that out with some nice shading and light work. Rob Leigh letters this issue, and does well for the most part. It was strange NOT having a font for the Joker. I know some will like not having that, but I’ve grown used to it. So when I began reading the first page, I didn’t realize it was the Joker talking until I turned it. There were a lot of onomatopoeias throughout this issue, and one stuck out to me; “KRAK.” Since when does slicing someone’s throat open make the “KRAK” sound?!

Final Thoughts: Unless you are a fan of Kelly Jones (and I’m sorry if you’re read my review this far), I’d pass on this issue. There are better comics for you to spend your money on.