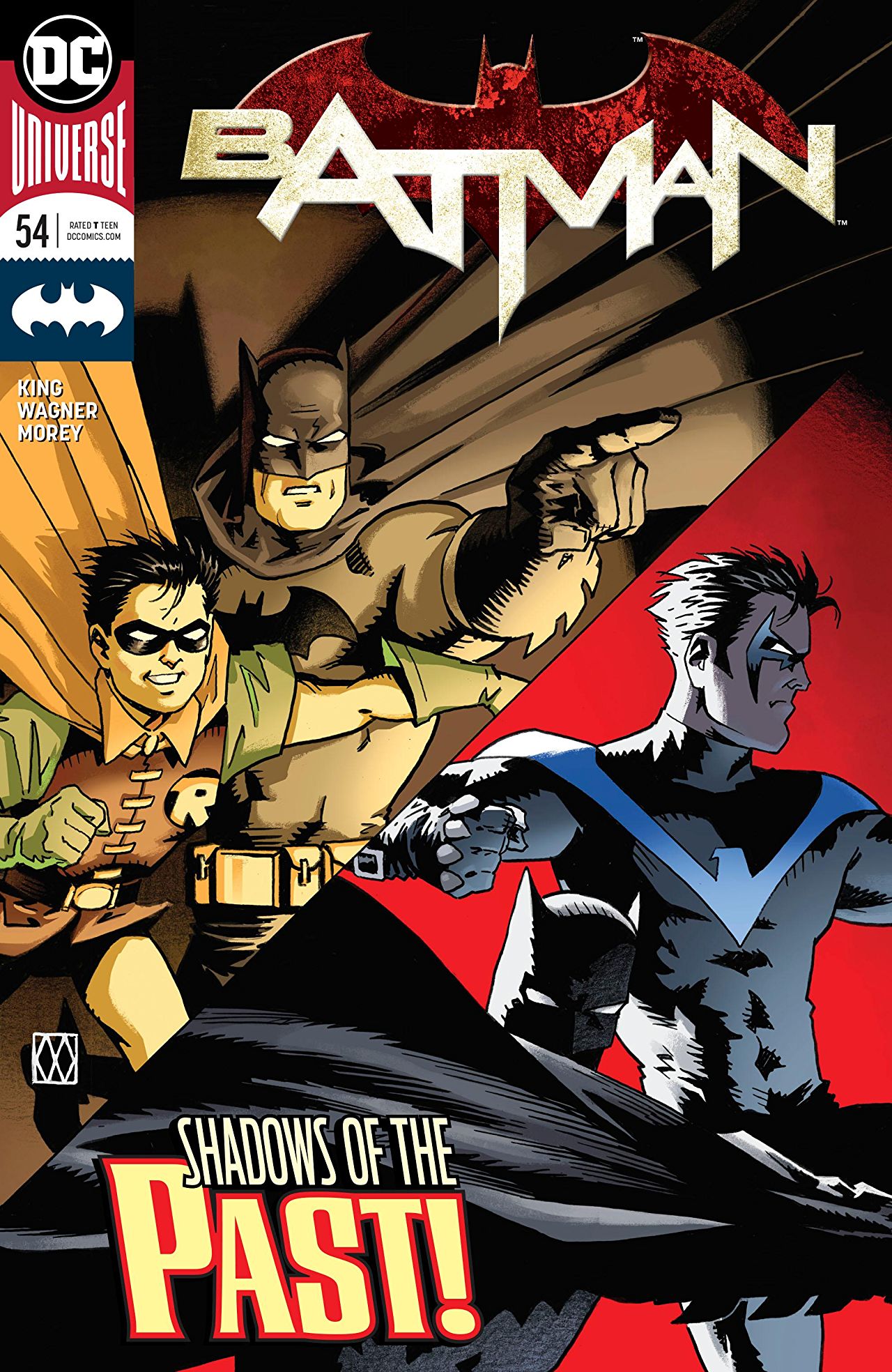 Overview: Dick’s relationship to Bruce both as Robin and Nightwing takes center stage.

Synopsis (spoilers ahead): The issue opens with a shot of the Flying Graysons poster, as someone yells, “Oh God.” The panels zoom in on the picture of Dick’s face as the dialogue chaotically recreates the moments after his parents were murdered, ending with a plea – “Someone help that boy!”

Dick’s smiling face on the poster is replaced by Nightwing’s smiling visage, as he and Batman, in the present day, confront Crazy Quilt. Nightwing and Batman exchange quips at the hapless villain before taking him down.

As a child, Dick is plagued by nightmares of his parent’s murder, and Bruce comforts him with a hug.

In the present, Dick tries to comfort Bruce with a hug, but Bruce attempts to put him off, saying he doesn’t need him. Alfred enters, with Dick’s favorite food, cucumber sandwiches, but Bruce says he’ll be working on the Freeze case in the cave.

In the past, Dick rejects Alfred’s sandwiches, saying that they, and Wayne Manor, are gross, and he runs off weeping.

Batman tries to get Nightwing to take their battle against Condiment King seriously since the pathetic villain killed three grocery store workers in a week. After a face full of ketchup, Dick appears to take things more seriously.

Child-Dick lies on the floor, having fallen from the chandelier trying to fly. Bruce attempts to act as a father, bond over their lost families, but Dick rejects him, insisting that he’s not a toy for a rich guy.

Dick persuades Bruce to sit and watch a Gotham Knights football game on TV with him, reminding him of a moment of a breakthrough between them, when a stubborn, grieving Dick finally heard Bruce’s commitment to him as a son.

Dick tries to get Bruce to make a bet for a penny with him that he can’t bounce his escrima stick 37 times in the Batcave. When he succeeds in his trick, he says, “I’ll take the big one” – referring to the giant penny that’s been a mainstay of the cave for decades. Batman laughs for a moment, then breaks, but struggles to insist he’s fine. Dick says that he knows he’s fine, but if he doesn’t want to be fine, Dick is there for him.

Dick, as a child, explains his mother and father’s joke of betting a penny (since they are little – though Bruce tells him not all pennies are little), as he tries to beat Bruce’s one-handed handstand. Bruce tries to convince him to eat the cucumber sandwiches – and in the present, Nightwing reminds him of the moment. Batman remembers and shares that his own father shared his favorite cucumber sandwiches with him, saying “Don’t give up on them. Keep trying. Again and again. Because I swear. They’re worth it.”

Analysis: After the painful, complex, and richly crafted “Cold Days” arc, this standalone issue, “The Better Man”, feels like a bit of a breather, a pleasant relationship study before darker threats arise again. Tom King uses one of his favorite devices – flashing back and forth between different time periods to enrich both timelines in his narrative – to excellent effect here. The transitions are smoothly handled, and he manages to tie thematic and plot elements with the last arc. The issue opens with the short exclamation, “Oh God”, paralleling the difficult relationship Bruce articulated in the last issue, and Batman refers to work on the Freeze case in the story clearly set after the trial has ended. Though not quite as rigidly formalistic as the reverse-story seen in Future’s End: Grayson, there’s clearly a similar concept at play – Dick Grayson growing closer and closer to another, darker character (in this case Batman, in Future’s End, Helena Bertinelli of Spyral). And just like the Future’s End issue of Grayson, King once again uses bottom of the barrel villains (in that case, Cluemaster, father of Stephanie Brown, in this case, Crazy Quilt and Condiment King) to provide nudges along the way for the heroes to grow closer and break down each other’s walls.

Legendary Batman artist Matt Wagner provides the pencils. I’m not familiar with the works upon which Wagner’s reputation is drawn, but I have to admit, there’s a bit of a mismatch between King’s spare, tragic, powerful writing, and Wagner’s thick, clear lines and appealing, cartoony expressions and designs. This kind of contrast can work – Greg Rucka’s collaboration with both Shawn Martinborough and Rick Burchett come to mind, as does King’s work with Barnaby Bagenda and Gabriel Walta – but Wagner’s linework seems to push the sincere love between Bruce and Dick a little overboard into sentimentality. The design of Nightwing’s domino, as well, seems a bit goofy looking – the edges of the Bat-motif stretching too far and too thin in contrast to his usual design in his solo series. On the whole, the issue’s art looks quite strong but doesn’t quite seem to reach its full potential. After the controversy over Wagner’s son being rejected as colorist for this issue, replaced by longtime Tony Daniel collaborator Tomeu Morey, a shadow of possibility hovers over the artwork, though since the largest issue is with the lines themselves, and not necessarily in the coloring, that could be completely irrelevant to the art’s effectiveness. Morey does leave the color differences between the flashback and present-day sequences fairly subtle, instead of the dramatic sepia vs. vivid red and blue contrast on the cover which is all that remains of Brennan Wagner’s coloring work in this issue. There is an interesting effect in the way Morey fades the colors of all but the main figures in a scene throughout the book, though the somewhat over-rendered use of shifts in the shade to indicate three-dimensional objects tends to overly complicate and work against Wagner’s simpler style.

All in all, King, Wagner, and Morey turn in a solid, heartfelt issue that seems to just miss its full potential. However, it’s clear that King continues to build on his previous issues towards many devastating shocks to come.