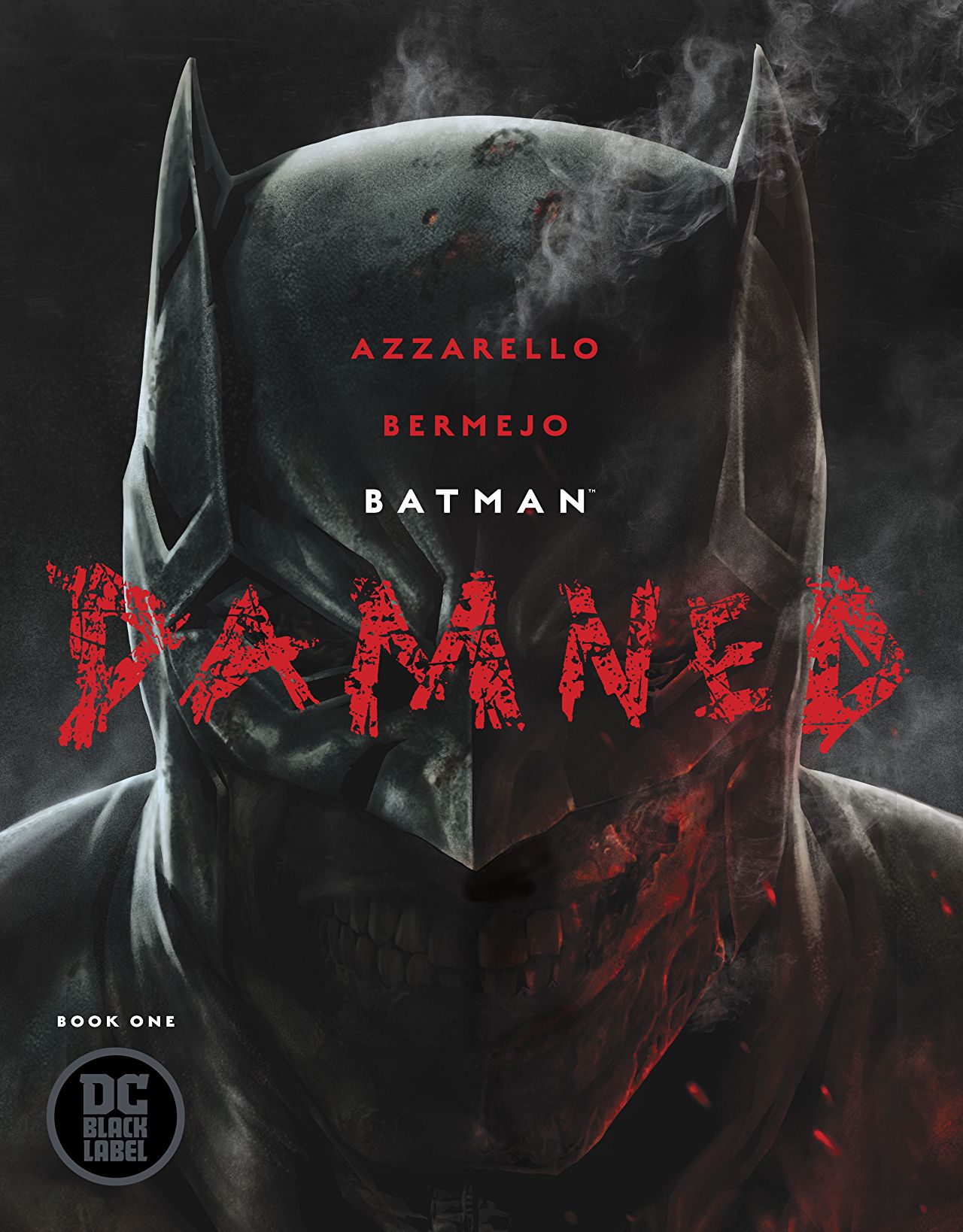 Overview: Batman encounters the supernatural while investigating the Joker’s murder.

Synopsis (spoilers ahead): The story opens with narration over panels of a close up of a heartbeat monitor, leading to the reveal of Batman in the back of an ambulance, bleeding profusely from a wound to his side.  The paramedic begins to cut away Batman’s cowl before Batman grabs him by the wrist and begins to violently push away the paramedics.  The police officer riding in the ambulance pulls his gun and Batman football tackles him out the doors of the moving ambulance, landing hard on the street.  Batman runs through the crowd, still bleeding, into an alley, where he calls for Alfred.

The story then flashes to Batman falling from a bridge, still bleeding.  Batman splashes into the river and as he makes it to the surface, he sees his parents on the banks of the river telling him he’s doing fine as hands reach up from the water and pull him back under.

Batman wakes up in the alley to a figure approaching, who he mistakenly thinks is Alfred.   The figure turns out to be the narrator of this story, John Constantine, as Batman loses consciousness. Batman has a vision of himself as a child playing on an old merry-go-round while his parents sit on picnic blanket nearby.  Bruce’s father is looking at a woman in a green dress as his mother looks on with a scowl on her face. Bruce is called by a young girl with pale skin and yellow and red eyes who speaks cryptically to Bruce as he falls from the merry-go-round.

Batman wakes up in a dingy bedroom surrounded by pentagrams and other symbols on the wall, with the wound to his side healed.  In the living room, Batman finds Constantine watching the news (With Boston Brand aka Deadman hovering unseen in the room).  The news reports that the Joker’s body has been pulled from the Gotham River near the bridge.  A confused Batman states that he was on the bridge this evening and asks Constantine who is responsible for Joker’s death.  Constantine responds that the police don’t have a clue and turns around to find Batman has disappeared out an open window.  As Batman plummets, the story flashes back to Bruce as a child on the Gotham Bridge as his father speaks closely with a woman in a green dress.  Bruce accidentally drops a penny his father gave him over the side of the bridge and almost falls trying to retrieve it and is scolded by his father.

The story then flashes to the same bridge in the present, with Batman looking down from a suspension cable over a police crime scene.  Gordon looks over a corpse under a white sheet as a homeless man in a green jacket says the victim was killed by the devil.  The man follows Gordon to his car, raving about a demon, only to run when Batman approaches him to learn what he knows.  Batman chases the man, who disappears into a tunnel.

Batman returns to the Batcave and strips out of his Batsuit.  A body scan reveals no trace of his stab wounds.  Bruce walks into a vault of Batsuits as the computer reports that the dead body found on the bridge is at the Gotham City Morgue but that the Joker’s body has disappeared.  Bruce pauses at a makeup table with a false beard and hat as he tells the computer to check again, only to have an eerie voice tell him to check again as one of his Batsuits comes alive and reaches out for him.  Bruce cowers on the floor, only to find that the Batsuit is back in its display and nothing is out of the ordinary.

On a Gotham City Street, Bruce, disguised as a homeless man, watches as a street performer, a woman with dark hair, fishnets and a top hat (presumably Zatanna) runs a game of Three Card Monty.  Deadman arrives and jumps from body to body as he speaks to Batman, warning him that dark forces are conspiring against him before Deadman possesses a stray dog and walks away.  Bruce asks Zatanna if she’s seen the homeless man in the green coat and she answers by pulling a joker from her deck of cards.

Bruce then sits naked in a chair in Wayne Manor and dreams of himself as a boy in his bed, listening to his parents argue in another room.  The pale little girl appears in the shadows holding a bat in her hands, speaking of being fearful of what he will become and holding the bat up to Bruce’s chest.

Bruce wakes to a news report of a kidnapping which brings him to the Gotham Cathedral.  As Batman enters, Constantine’s narration explains that a priest and a rabbi have been abducted.  Batman meets with Constantine inside the church and asks if Batman believes in the afterlife.  The book ends with Batman standing in front of the altar, where the statue of Jesus on the Cross has been defaced with Joker’s grin.

Analysis: There’s a lot to unpack in this first offering from DC’s new Black Label imprint, which offers a no hold barred playground for creators to tell stories.  The book is definitely for adult audiences, featuring nudity and coarse language that don’t really add anything to the story but also don’t seem gratuitous or out of place in this story.

The book, while narrated by John Constantine, is very much from Batman’s perspective.  The story is intentionally disorienting, starting with an injured Batman trying to piece together something terrible that he can’t quite remember. I like that writer Brian Azzarello and artist Lee Bermejo keep the mystery of what happened on the bridge and the Joker’s apparent murder intact throughout this first issue and that the creators trust the reader to follow along without hitting them over the head with unnecessary exposition or narration.

What really strikes me about the title is the restraint that Azzarello and Bermejo use in telling this story.  It would have been easy for the creative team to give in to the temptation to have the story overflow with supernatural imagery, and the less is more approach that the story employs really works here and I think will continue to pay off as the story goes on and more elements are undoubtedly introduced in the second and third installments.  There’s a creeping uneasiness throughout this story that reminds me of films like the Exorcist, a feeling of a slow build towards something terrible, which pays off in the reveal at the end of the book.  Other than the Deadman sequences, the more fantastical elements are contained to dream sequences and hallucinations that add to the disorienting and uneasy feeling of the title.

Let’s talk about that ending: I’ve always preferred the version of the Joker where he’s not crazy so much as he is a force of unrepentant evil, and I enjoyed the creators playing around with the idea of the Joker as a demonic figure in having Joker imagery defacing religious iconography.  I’m curious to see where this story is going with this.  In an out of continuity story where there exists at least the possibility that Batman lost control and killed the Joker, it’s an interesting idea to have the possibility of the Joker dying only to come back as something worse to haunt Batman.  The Joker has always been Batman’s own personal demon, so the prospect of him becoming a literal demon seems appropriate if that is where the story is going.

The book makes good use of the supernatural supporting cast.  I think it was smart to not include the usual Bat-Family members, including Alfred, into the story as it makes Bruce seem more alone and vulnerable.  I don’t know if Zatanna is going to end up being anything other than a fun cameo but I liked her inclusion here and I thought the use of Deadman was a well-done call back to films such as “Fallen” with Deadman jumping from body to body around Batman. John Constantine makes sense as the narrator for this story and keeps a noir tone that we’ve come to expect.

I did find that the there is a tendency in the narration to jump from one metaphor to another which made it a little hard to follow, but that is a minor quibble.  I also found the story’s treatment of Bruce’s parents interesting, with the flashbacks hinting at a possible affair between Thomas Wayne and another woman.  While much like everything else, its too soon to tell what is going on in these flashbacks, given that the Wayne’s are always treated like they were a healed leper away from Sainthood in most other interpretations, its refreshing to see a writer treat them as human beings with flaws and it adds another complicated layer to the flashback/dreams that Bruce is haunted by.  As for the creepy girl that keeps appearing in Bruce’s dreams, it is hard to say what her deal is yet and if she is there to warn Bruce or to drive him into madness.

Lee Bermejo’s art is, as usual, breathtaking.  It is easy to see why his version of Batman continues to come up as fan-favorite whenever the movies are rethinking Batman’s costume.  If Batman existed in the real world, this is how he would look, and there’s a Batman ’89 influence in the cape and cowl that I can’t help but appreciate.   There’s a fun mix of the real and the fantastic in this issue and Bermejo’s style handles both masterfully.  I really enjoyed his interpretation of Deadman, where his costume has been reimagined as the muscle and sinew of a skinless corpse.  Kind of the superhero equivalent of the plasticized human cadaver exhibits like “Body Worlds” from ten years ago.  I also have to call out the tremendous panels of Batman surfacing from the river and seeing the blurry image of his parents on the shoreline, distorted by the rain.

Final Thoughts: I’ve always looked forward to any book that pairs Azzarello and Bermejo but this book is so far shaping up to be something special, a book that makes use of the lack of the usual restrictions to tell a unique story.  The bar has been set very high for DC’s Black Label.