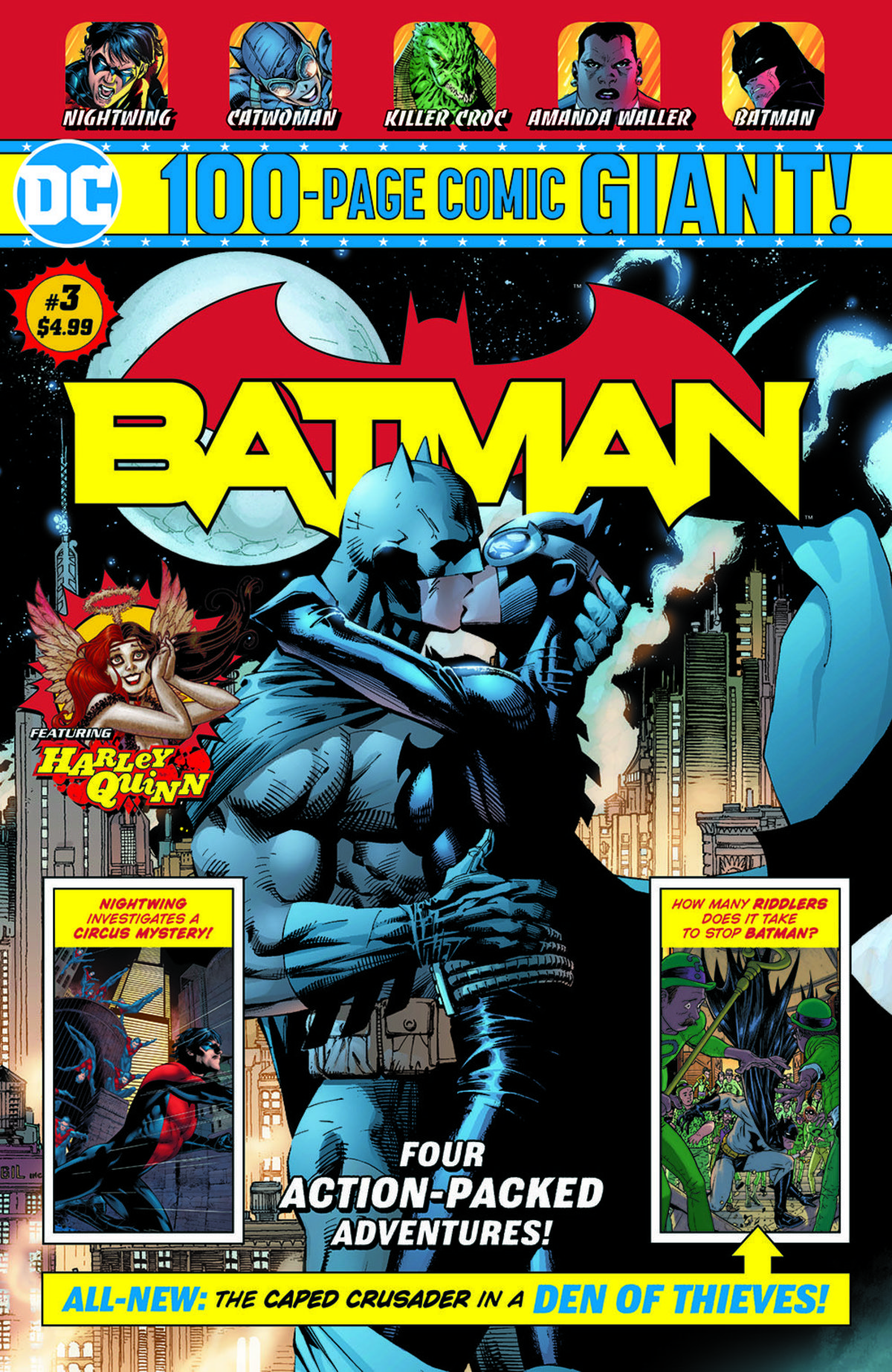 Overview: “Batman Universe” begins as Batman faces a mysterious threat from the Riddler.

Synopsis (spoilers ahead): Batman and Alfred banter, as Batman skips out on a dinner at Wayne Manor to hunt down the Riddler’s most recent clue. Finding a courtyard full of Riddler impersonators, Batman defeats them all, tackling the real Riddler. However, when he retrieves the Riddler’s target, a priceless Faberge egg, three mysterious signals appear and stun Batman, leaving with the Riddler and the egg.

Waking up to the cops thinking about taking off his mask, Batman meets Commissioner Gordon on the rooftops, who tells him that all of the false Riddlers have no trail to find who is behind the mystery. However, he also tells Batman that the egg’s original owner is Jonah Hex.

Analysis: Of course, we have to cover a new Batman series going under the name “Batman Universe”! And thankfully, this story lives up to the hype of being Brian Bendis’s first Batman story since he started working at DC exclusively (though the recently published Pearl #1 reprints the actual first Batman story by Bendis as a bonus content – “Citizen Wayne”).

While Bendis reigns in some of his more obvious writerly traits – walls of text prohibiting normal panel structure, and even his usual quippy style is restrained to fit with Batman’s more taciturn nature – the real star of the show is Nick Derington, recently seen doing the covers to the fan-favorite Mister Miracle series by Tom King and Mitch Gerads.

Derington and Bendis use a rarely seen first-person perspective for much of this issue, giving a sense of immediacy and action to the setting of the scene. The action is vigorous, with Batman taking down at least nine false Riddlers and the real Riddler in several kinetic pages. Derington’s Batman is reminiscent of Dan Hipp’s Teen Titans Go in its bold, simple lines, but he makes it feel a bit more serious with a James Tynion-style unshaven chin.

Master colorist Dave Stewart (Batwoman: Elegy) gives the whole book a vivid yet nuanced palette – dark purple-blue skies with glorious stars, a Batman with grey-tan suit and blue-black cowl, and warm night-time city lighting giving the fight scenes a sense of fun energy, complementing Derington’s thick, bold lines and careful balance of detail and clarity. While Patrick Zircher’s art for the first two issues of this Walmart Giant series was extremely strong, Derington makes an incredibly brilliant first statement with this issue, and we can’t wait to find out what happens next in this madcap ride.

(Note: Brian Bendis has stated that this story takes place “in continuity” and that he will use characters and concepts from this run in his future DC work, though it’s a bit hard to see exactly where this will fit into Tom King’s current run on the Batman title.)

Also included in the giant are reprints of Batman: Hush Part 3 featuring Killer Croc’s escape from Arkham, Nightwing: Past and Present featuring a mystery at the circus and Harley Quinn: Love Stinks featuring a Valentine’s Day story.

Final Thoughts: Bendis and Derington burst on the Batman scene with an action-packed, with moments of humor, first chapter.