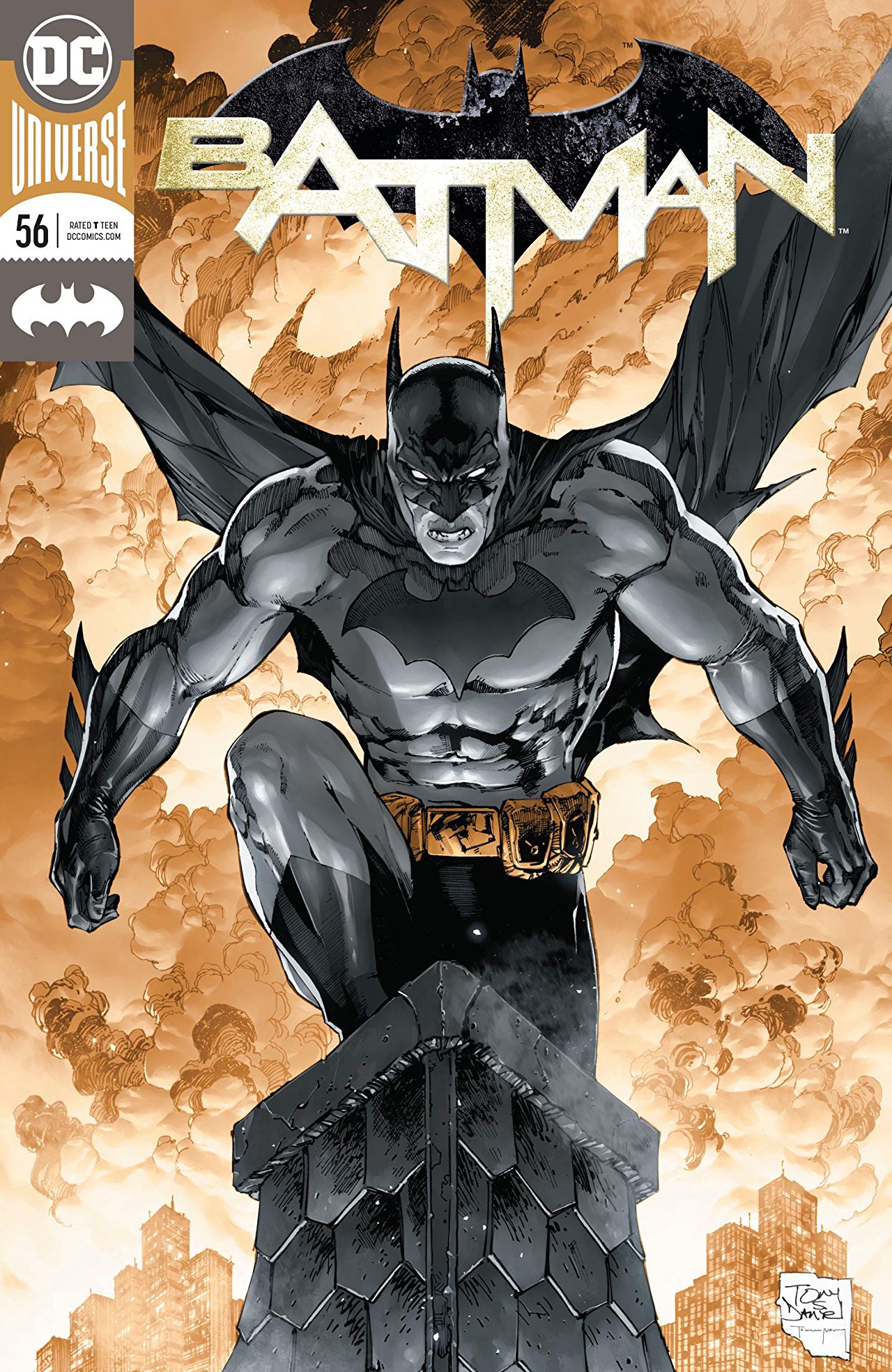 Overview: As KGBeast returns to his roots, Batman follows, driven by a cold flame of fury.

Synopsis (spoilers ahead): An old man sits alone with a shotgun on his lap. He hears gunshots, then a voice calls from outside in Russian to put down his gun and open the door. In response, he blasts the door with his shotgun. The man who called himself “Zimmerman” in the last issue kicks it down, knocking the old man over. The old man greets him as “Tolya,” and the man who shot Nightwing calls him Father.

In Gotham, Batman coldly beats the man who sold KGBeast (Anatoli Knyazev – Tolya) the gun, then tells Alfred he can find his man, perhaps the best professional killer in the world.

KGBeast asks his father how long it’s been since he drank – 26 years. As he reminisces about how his father was a “Beast” when drunk in his memories, he gives the old man a glass of alcohol, and he drinks.

Fighting ninjas alongside Bronze Tiger, Batman learns that KGBeast killed everyone who trained him except his father. Tiger expresses concern for Bruce’s pain due to Selina and Dick, but Batman insists that he tell him where KGBeast’s father is.

Tolya’s father asks about how he lost his arm, then slaps him when he finds out that Batman took his arm and Beast did not take one of Batman’s in payment.

Batman, captured by the New God Kanto and suspended upside down, demands to know where KGBeast is, even though Kanto thinks he’s just going to saw Batman in half. Threatening to reveal Kanto’s whereabouts to Orion, he learns that KGBeast’s father is still alive, then escapes his bonds and knocks Kanto out.

As Toyla’s father continues to drink, Toyla tells him he was recently paid a lot of money to take Batman’s son. The old man approves but says an arm is more important to a man than a son.

As Batman works his way through the Russian bureaucracy, he learns that KGBeast’s father lives three hundred and seven kilometers from anywhere, in weather too cold for vehicles or animals. After wrecking three Batplanes, Bruce starts walking, an over two-day trek without stopping. He loses Alfred’s signal but continues walking, with the sound of the wind, snow, and his footsteps as the only thing in the world.

Toyla’s father asks why he kept him alive when he killed his mother and siblings. Tolya says he loved him because he was strong, and still loves him. The old man says such love is a weakness and says that he let Toyla be weak, as he loves his son too. In response, KGBeast shoots him through the head, then finishes his drink. As he puts down the glass, he hears Batman’s footsteps in the snow.

Analysis: As Tom King’s “Beasts of Burden” arc reaches its middle, we see that his emphasis on the father/son relationship between Bruce and Dick intentionally parallels the horrific relationship between the old man and his son, Tolya, the KGBeast. Where Bruce spent Dick’s childhood trying to help him heal after his parent’s deaths, the old man tried to make Toyla “strong” – meaning no connection to any other human. Though both Batman and the old man share an inability to communicate their love to their sons in a healthy way in the present, one father/son relationship leads to a quest for justice, the other leads to the son murdering his entire family, ending with the father. It will be extremely interesting to see if the fascinating and powerful story “The Brave and the Mold,” in which Swamp Thing faces the death of his own father and makes a choice Batman believes is evil, comes into play in King’s long-term run.

Tony Daniel continues to provide art, with Danny Miki assisting on some of the inks, and Tomeu Morey on colors. Morey’s coloring presents a much less garish effect than last issue’s purple and green skies of Gotham, having a nice overall cold blue palette. The final images of Batman walking the unbelievable distance to the old man’s house has a beautifully soft white and grey look, a well-chosen contrast to the bleakness and evil within.

Final Thoughts: The middle of “Beasts of Burden” presents a grim, relentless chase, and a parallel between two very different fathers.