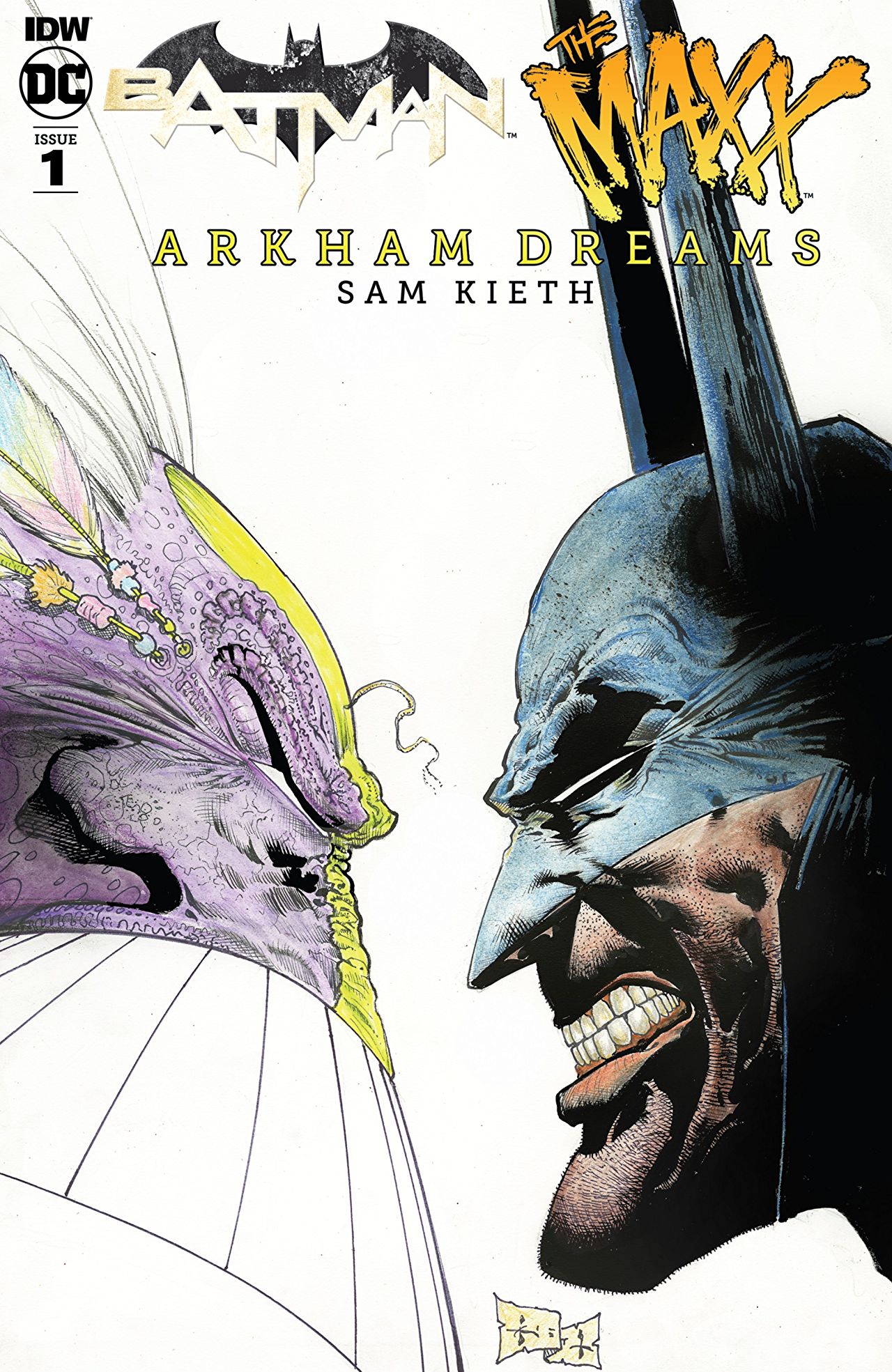 Overview: There’s a Dark Knight on the streets of Gotham striking fear in the hearts of those who would undermine the hand of Justice and Batman is going to find out exactly who he is!

Synopsis (spoilers ahead): Our story begins with an expansive, barren landscape called The Outback. But as becomes quickly evident, this is not a place that can be reached on any map or charts of this planet. The Outback, instead, is a sort of astral plane, a reality that can be accessed via the subconscious. But there is something amiss here. The narrator recalls a fertile land populated by majestic beasts where the imagination could roam free. All that is left of this Outback is the dry bones of something called an Air Whale and an ominous feeling that danger lurks just over the horizon.

Suddenly, we cut back to reality, the streets of Gotham, present day. Batman is conducting a typical patrol and stops near a homeless shelter when a small commotion catches his eye. A funny-looking stranger in a purple costume is making noise outside the shelter. This is our original narrator from the Outback. But Batman doesn’t know this. What he can surmise is that the source of this man’s agitation seems to be the deteriorating state of affairs in some place called the Outback. He nearly lets the whole incident pass into the night but something about this stranger’s appearance and demeanor has set off Batman’s radar and he asks the responding police officers if he might accompany them to Arkham Asylum.

Inside Arkham, Batman speaks with an attending doctor about this stranger who calls himself The Maxx. The Maxx has been flagged for surveillance by the CIA according to the doctor. Furthermore, the Outback he refers to is not in Australia. Dr. Disparu explains to Batman that “the Outback” is code for the subconscious. While The Maxx mutters to himself, the doctor begins hooking Maxx up to a strange machine and explains to Batman that he won’t be answering all of his questions, as Batman “doesn’t have clearance” for the classified government secrets that might be exposed.

Little by little, the scene becomes stranger and stranger, Batman notices the doctor’s answers get vaguer and vaguer, until… Snap! And there they are.

All at once, and as if they had always been there, Batman and The Maxx are in the Outback. The Maxx explains some of the things he knows to be true about this place, pointing out major members of the food chain such as Seussadons, Isz and Air Whales. He explains about the Jungle Queen and the God People Ret Quark’n. Batman, for his part, admits that he has no idea what The Maxx is talking about. But while he seems unphased by being transported to this strange world, he does keep his wits about him enough to notice that certain actions seem to be the makings of a trap. But as he tries to straighten out these strange occurrences in his own mind he realizes he is picking up a bad habit from The Maxx; he’s thinking out loud.

Eventually, the two heroes come face to face with the Jungle Queen. And while The Maxx is eager to please her and defend her from whatever invaders may have sullied her lands, Batman remains non-plused. He has experienced enough of the hyper-natural to know that for the moment he would do best to trust what his senses tell him. At the same time, he is in no hurry to pick sides in a landscape that seems to be powered by the subconscious. For if anyone knows about the desires of the subconscious and the dangers therein, it’s Batman.

Then, just as quickly, they’re back in Arkham watching as Penguin submits to the same procedure that was done to The Maxx. But before Batman can object, they’re back again on the expansive plains of the Outback. Only this time one of the majestic beasts is bearing down on them. It’s a giant poisonous air blowfish. They’re going to have to work together to avoid the mouth!

Analysis: What’s absolutely wonderful about this book, especially if you’re a fan of The Maxx, is that from the very first panel, heck, even from the cover, you’re transported to the world that Sam Kieth first explored in the original series. The Maxx was always a story about deep corners of the mind and what actually makes a hero. It’s about what the human mind will do to protect the body and what happens when it reaches its limit in doing so. The mention of Air Whales, Isz and the like will have anyone who was a fan of the titular hero’s original run giggling as one is teleported in much the same way Batman is right back to the first time you encountered The Maxx.

At the same time, there is a certain degree of confusion that should also accompany any attempt to browse this comic. While the Outback of the original title was a beautiful place to escape to, it was never much more than just that; a place to escape to. Perhaps this confusion is intentional, but either way, our heroes may be in serious trouble when the other shoe drops back in Arkham.

Sam Kieth’s art is really a treat. It’s otherworldly and beautiful, unique in its cartoonishly horrific detail. Long-time Batman fans will remember that this isn’t Kieth’s first experience with the Dark Knight, having produced several issues, miniseries, and covers, memorably Batman/Lobo: Deadly Serious and Batman: Secrets. His style paints Batman in a hauntingly specific light. The Maxx here looks the same as ever and his bull-in-a-China-shop articulation is a great foil for the gaunt vampire-esque, statue-like poses Kieth finds Batman in. There is something about these two on the same page that makes more sense than you’d think. The Maxx and the characters around him are in large part plagued with mental health issues, some stemming from old traumas and wounds, some from untreated illness. One immediately wonders how much introspection Batman might be willing to do as he once more finds himself on the other side of the bars in Arkham Asylum.

Final Thoughts: Returning to the Outback with The Maxx is a joy, but it’s a joy that Batman may not share when all is said and done. There is an opportunity here to go on a real journey with these characters and perhaps uncover something we didn’t previously understand about them. Ultimately it will be on the creator to decide if this story gets by purely on aesthetic merits or if we go deeper inside the mind of one or more Dark Knights. I for one think there is a reason The Maxx is here with Batman and I’m looking forward to seeing him and Sam Kieth try and light a torch in the cave that is Batman’s mind.