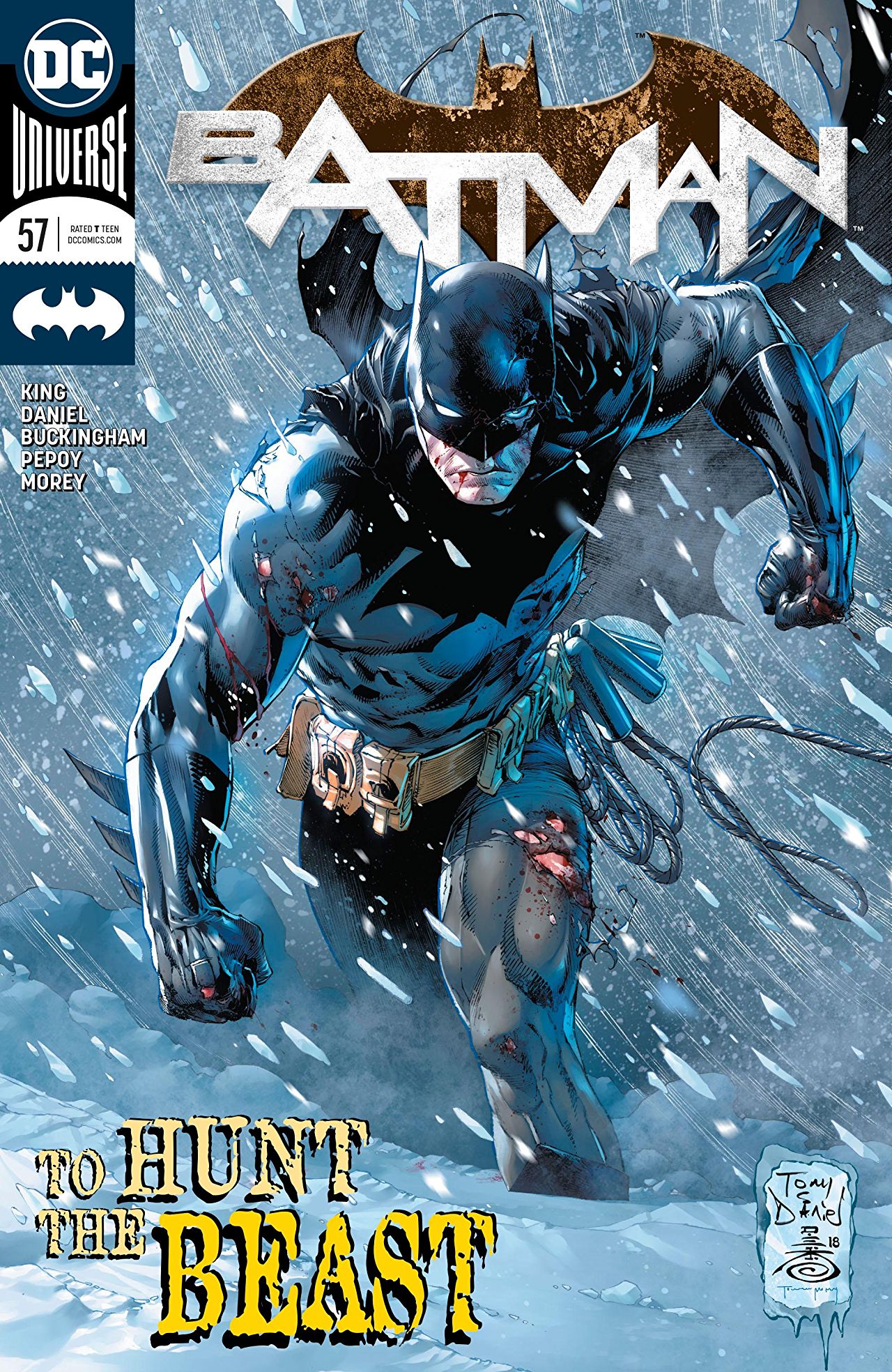 Overview: Batman and KGBeast, entwined in a deadly battle in the present, also find a link in the past.

Synopsis (spoilers ahead): When KGBeast was just the little boy, Tolya, his father, when he wasn’t drunk, would read him a folktale of a group of animals going to St. Petersburg.

In the present, Batman approaches the tiny hut in Siberia where KGBeast has just killed his father, to exact vengeance for the attempted assassination of Nightwing. Batman dodges Beast’s shots but catches a bullet in his right shoulder.

In the folktale, all the animals fall into a pit.

With his gun out of bullets, KGBeast and Batman charge at each other.

The animals in the pit begin eating each other.

Batman and KGBeast brutally beat and tear at each other in the snow outside.

The fox tricks the last remaining animal into killing itself, then eats them.

KGBeast gains the upper hand, but just as he is about to kill Batman, a snapshot with the grapnel gun snaps his neck.

The seasons pass, and no one ever knew if the fox climbed out of the pit after eating all of the other animals.

KGBeast tries to bargain with Batman – he promises to tell him who hired him to kill Nightwing if Batman gets help. Declaring that he’s the World’s Greatest Detective, Batman leaves, telling Beast to get his own help.

In the past, Thomas Wayne finishes reading the Animals and the Pit to Bruce, saying he doesn’t know why he loves that macabre tale. He stands up to leave, but Bruce says he doesn’t want to be alone, and Thomas sits back down, smiling, saying he’ll stay for a little while, then he has to go.

Analysis: At first glance, the real-life Russian folktale collected by Alexander Nikolaevich Afanasyev “The Animals and the Pit” seems like exactly the kind of quasi-nihilistic, disconnected material Tom King would write himself. A quick internet search, however, shows that the folktale sequences, rendered in brightly cartoony style highlighting the grotesque violence of the narrative by famed Fables penciller Mark Buckingham, actually does come from the land of St. Petersburg. King brings this trio of issues to a close by meditating on the connection between KGBeast and Bruce Wayne as sons fascinated by the tale, read to them by two very different fathers. Tolya’s father brutally beat almost all warmth out of his son, and when he grew up, KGBeast slaughtered his entire family, waited decades, and ended by killing his father (see the last issue). Bruce’s father loved his only son and wife dearly but was ripped from this world by a mugger’s bullet, leading to a never-ending quest both for justice and to recreate the family destroyed by evil.

King’s use of thematic and narrative parallels, always a favorite technique, is deployed to solid effect here. However, the mawkish cuteness of the animals in the folktale combined with the complete lack of meaning in its ending leave the book feeling a bit like King wrote this section just to help provide a reason for the fill-in art by Buckingham (something most double-shipped books have to deal with, sometimes by employing flashbacks or dreams, sometimes by hiring two artists with very similar styles, or in this case, by telling a story with very different structural sections, allowing for a different visual style). In contrast, King deploys the more familiar quasi-modern fable of the scorpion and the frog in last month’s Heroes in Crisis #1, using the structure of that fable clearly without explicitly referencing it, and using the expected morality of that fable to question the nature of the characters involved. Here, there are no clear parallels (allegory) between Batman, KGBeast, and any of the animals in the pit (despite the animalistic themes of both combatant’s names), and neither Bruce nor Tolya reference their father’s reading of the folktale in the present to provide extra context. The welcome addition of Thomas Wayne to the group of fathers being examined in the final scene provides some hints as to why King used this genuine piece of folklore in this story – the idea that Bruce and Tolya took the trauma they received in childhood, and it provides insight into each man’s path in life. One of them decided to be like the fox and destroy everyone in the pit with him. The other, despite sometimes isolating himself, continually drives himself to not be alone, or let any of those he cares about be alone, just as Thomas didn’t leave him alone when he asked.

The final question of this issue appears in Batman leaving KGBeast with a neck he broke three hundred kilometers from civilization. After spending three issues desperately pleading with a jury not to take God’s place in judging life and death for Mr. Freeze, Batman decides to play God and leave KGBeast to die. Such a brutal choice shows how far Batman has fallen with the double loss of Selina and Dick, and hopefully will carry consequences in the next year of stories, as Batman leaving someone to die when the injury leading to death was directly caused by his actions goes much further than we’ve seen in quite a while.

Next month, solicitations promise an arc where Batman faces the Penguin for the first time in a while, and Batman will possibly stumble on the edges of Bane’s plot against him. Though it’s taken seven issues, or three and a half months since the devastating final page reveal of Batman #50, it’s good to know that King doesn’t plan to leave the main thrust of his narrative without direct development much longer. “Cold Days” was a masterwork of craftsmanship and emotional effect, but “The Better Man” and “Beasts of Burden” haven’t quite reached the same level of resonance.

Final Thoughts: An intriguing thematic exploration, this rather thin plot closes out the brutal “Beasts of Burden” arc.