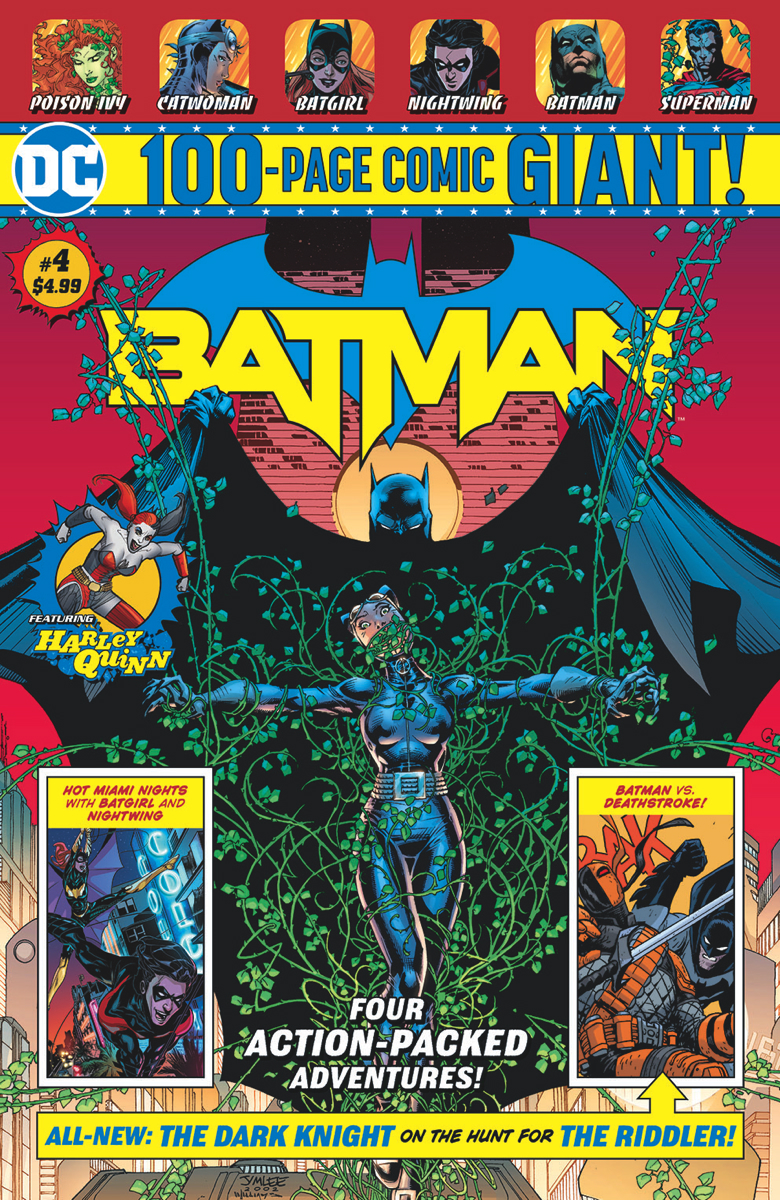 Overview: After meeting the puzzling Jinny Hex, Batman chases the Riddler to Amsterdam, meeting some surprising folk along the way!

Synopsis (spoilers ahead): The Batmobile pulls up to a small repair shop in a tiny town. Batman asks the crossing guard lady on the side of the road where he can find Jinny Hex. The guard calls behind her, and Jinny walks up from the truck she’s fixing. Batman asks her about the egg stolen in the last issue, which she donated to the Gotham museum. Puzzled at her giving away something worth $15 million, she responds that she didn’t know anyone to sell it to and that her ancestor, Jonah Hex left it to her. At a dead end, Batman leaves to chase the Riddler, and Jinny enters her house to look at an old portrait of Jonah Hex.

In Amsterdam, the Riddler freaks out about being in the open at his friend’s club. His worry proves correct when Batman shows up, but his friend hired Deathstroke to protect them. As Batman and Deathstroke beat each other up, the Riddler tries to escape, but Green Arrow shows up and knocks Slade out, then demands to know what is going on.

Analysis: Brian Bendis’s second twelve-page installment of “Batman Universe” continues his high-action, high-verbiage approach to Batman and the wider DC world. The introduction of Jinny Hex, descendent of Jonah Hex, is fun, but not much is revealed about her other than her appearance as a sassy Bendis-speaking redhead and career as a mechanic. A bit of a let down for a character who Bendis has promised to use in his new Wonder imprint (which includes the forthcoming Young Justice title). Continuing in his goal of using this Batman story to explore a huge swath of DC characters, Bendis throws Deathstroke and Green Arrow into his story, and while Green Arrow gets a nice closing line in the issue and a solid takedown of Deathstroke, Slade Wilson himself is rather underutilized. Though it’s nice that he’s a serious challenge for Batman, the fight is a bit dull, even when rendered with great energy by Nick Derington.

Derington’s art continues to stand out – clean-lined, appealingly simplified but still rich in detail, his unshaven Batman is powerful but still vulnerable. The other characters all have a great vibrancy even when Bendis doesn’t quite give them enough to do, like Jinny or Deathstroke, though it’s a shame Derington doesn’t use Slade’s current look in his solo title to boost Bendis’s claims of continuity in this comic. Though, to be fair, even when Christopher Priest, the writer of Deathstroke’s solo title, wrote Deathstroke into the end of his ten issue Justice League run, artist Pete Woods also chose to use a more classic, 80s and 90s look for the mercenary instead of the slimmer, more technical look designed by Carlo Pagulayan for Priest’s brilliant ongoing.

The next issue promises both a chase and a reveal of who the Riddler is working for. So far, Batman has only poked at the surface of this tale, so hopefully, we’ll get some meat on the bones of the narrative structure. Though as long as Derington’s on art, it should at least be worth the read!

Also included in the giant are reprints of Batman: Hush Part 4 featuring Bruce Wayne visiting the Daily Planet, Nightwing: South Beach Connection featuring a both Nightwing and Batgirl in Florida, and Harley Quinn: Very Old Spice featuring a story on whether or not Harley can hold down a day job.

Final Thoughts: The mystery of the Batman Universe deepens as Batman crosses paths (and sometimes swords) with Deathstroke and Green Arrow in pursuit of the Riddler.