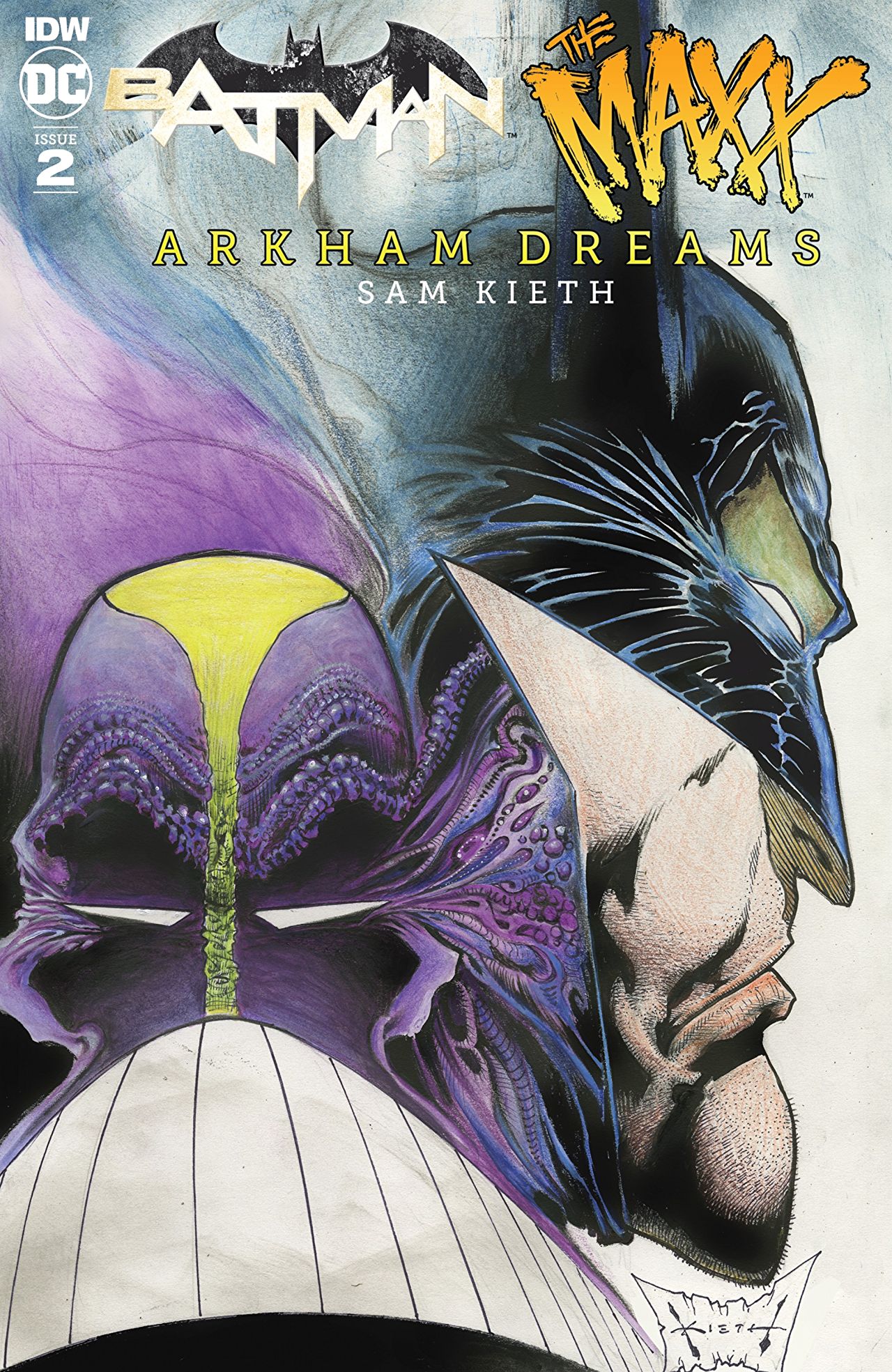 Overview: As they go deeper into the world of the Outback, Batman and the Maxx try their best to work together in an environment that is strange to each of them in different ways. As each tries to negotiate their surroundings, a familiar adversary from Gotham crosses into the Outback and he might just be crazy enough to destroy both worlds.

Synopsis (spoilers ahead): Batman and the Maxx are doing a rather incredible job of negotiating the murky waters of the Astral Plane as a team. While investigating the medical procedures of a Doctor Disparu at Arkham Asylum they have both been subjected to some questionable forms of treatment. The treatment seems to bring Maxx to a place he is quite familiar with, The Outback. Batman finds himself on the same plane of reality, just a little less comfortable there. As the two traverse the landscape of the Outback together, Batman quickly begins to see the striking similarities between his home, Gotham, and Maxx’s preferred home, The Outback. And although the two heroes are wading through a deep darkness that belongs to Maxx, it is Batman that helps him sort through the confusion and eventually re-grasp reality.

It is, however, a brief grasp on reality. Maxx is confused by the surroundings of Arkham Asylum. And even Batman is having a difficult time recalibrating his senses. As he realizes that Doctor Disparu is administering electro-shock therapy to Penguin (not to mention Maxx and himself) he demands that the Doctor immediately cease the procedure. Maxx, however, can’t wait that long and immediately leaps off the table and runs into the deepening darkness of the Arkham basement. Unlike Batman, he can’t understand the quick transition between what he perceives as The Outback and present-day Gotham. Batman is torn. He wants to make sure the doctor is stopped immediately and at the same time, he knows that Maxx has caught a scent. He is a detective in his own way, though in comparison to Batman, his methods are pretty crude.

Deciding on a course of action, Batman follows Maxx deeper into Arkham, all the while the layers of reality around them flash between Gotham and the Outback. Armed with this knowledge, however, Batman is able to keep the two of them from being distracted by the various flora and fauna of the Outback and plot a course across both realities. That is until a new variable enters the equation.

Back in Disparu’s lab, the Joker is about to undergo the doctor’s questionable treatment, but there’s a twist. The Joker saw how the treatment affected Penguin. He knows that the shock treatment may just be enough to hurtle him into the next reality. But unlike Batman who prefers this reality and Maxx who prefers the next, Joker is equally at home in either reality. He is crazy enough to know that he has been traveling between realities since long before any electro-shock therapy. And he is that much more adept at making his way across, between and all around each reality than either Maxx or Batman. Indeed, as soon as he appears in the Outback, Batman starts to lose his way, realizing that he can’t trust his senses much less his mind in a place where time and space don’t have the same meaning. And so what Maxx describes as an “Airwhale” could just as easily be a Gotham PD airship that Joker has already highjacked for the purpose of spreading Joker Toxin across the entire city. Or worse, maybe the three of them are all still in the basement of Arkham and Joker is simply playing with them while they drift in and out of consciousness.

In the end, it is Maxx who finally breaks the Joker’s hold on their reality. And while Batman explains that stabbing him in the Outback probably won’t stop him in the “real” world, at least the two heroes are able to gain the upper hand again. While it appears that their win is a physical one, it’s now clear that the only true path towards victory will be psychological. It’s a strange team-up but the necessity finally starts to make more sense. Maxx needs Batman to negotiate through Gotham and Batman needs Maxx to keep him focused in the Outback.

Meanwhile, Maxx’s “Jungle Queen,” Julie Winters turns out to be a real person as well (giving more credence to the idea that what happens in the Outback has repercussions in the real world) and as Maxx tries to keep a grip on the real world and locate Julie, he runs into his old nemesis, Mr. Gone. But Gone has some words of wisdom for Maxx. Recognizing that there is more than one Outback is a start, but if he wants to find Julie, Maxx will have to figure out which Outback he’s been traversing along with Batman. Otherwise, the Joker is likely to accomplish his goal to destroy both planes of reality.

With his head pounding, words from Mr. Gone mixing with the Joker and warnings from Batman in his head, Maxx runs ranting and raving from the scene, only to run smack into…. Julie Winters.

Analysis: Picking up right where we left off, this issue is another heaping portion of The Maxx imported directly from the original 90s Image series. Sam Kieth has definitely managed to reincarnate the look and feel of his psychedelic pseudo-hero and drop him into the world of Gotham City. But if the review is a bit hard to follow, that’s because, in all honesty, the story itself is difficult to make any real sense of. I was originally very excited about seeing the Maxx brought back and crossed with another hero who makes his name in the night and shadows, but Batman ultimately lives mainly on this plane of existence and Maxx is at his best in another reality all together. It’s proving difficult to make these heroes work on the page in a way that makes a great deal of sense.

With that said, it seems only natural to introduce the Joker to this sea of strangeness. It’s always been when dealing with the Joker that Batman walks the edges of insanity between this world and the next. So if part of the story is actually to show how Maxx and Batman have a hard time working together, bringing the Joker into the picture serves to bridge the gap between them in a way that I don’t think the characters would be able to reach on their own. Still, as of right now, the plot seems to just be a continuation of exploring Maxx’s unstable mental health. As a younger, less experienced reader I enjoyed The Maxx as a book that was outside the normative superhero genre. Now that I’ve read a great deal more and experienced different genres of comics, I’m left to wonder what this book really wants to accomplish. Hopefully, it is not simply to put two characters that Sam Kieth enjoyed illustrating on the same page.

If that IS the main idea though, the illustrations are amazing. I can’t deny that its fun to revisit the Outback and the wild creatures that Kieth populated it with. And seeing his zany take on the denizens of Gotham is a treat. It’s not the art that’s lacking for this project at the moment.

But if this book is going to right itself, Kieth needs to find a stronger through-line for Maxx and Batman to hold onto going forward. Battling the Joker is an interesting start but making this book anything more than visually stimulating will require some work at this point.

Final Thoughts: The dark shadows of Gotham City seem like a good place to try and bring the Maxx back into this reality and Sam Kieth’s artwork is deliciously bizarre. However unless the Not-so-Dynamic Duo can find something yet unwritten in their battle with the Joker or an even larger adversary emerges to help float the book, these heroes may sink beneath the waves from their own weight.