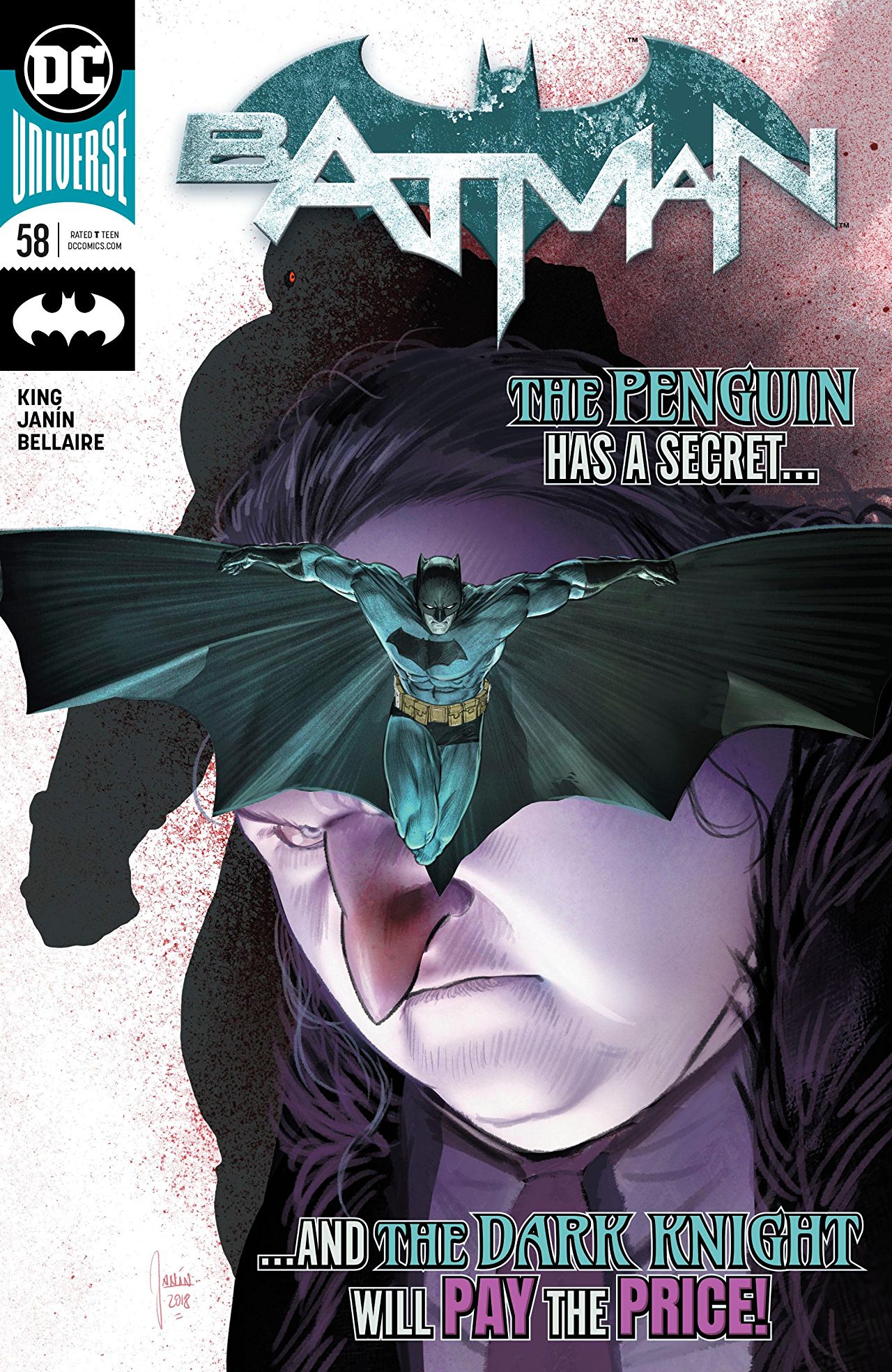 Overview: The Penguin must make a choice between two masters.

Synopsis (spoilers ahead): The Penguin, trying to insert a cigarette into his signature holder, hears the news that his wife Penny has been murdered outside his club.

Squawking in rage, the Penguin demands an umbrella and goes gets into a fight with Batman. He fires Penguin Plasma from his umbrella at Batman, but is knocked out with a solid punch.

At Arkham, the Penguin goes through the brutal processing procedure, then heads down to report to Bane, sitting on his throne of skulls, attended by Flashpoint Batman, saying it took some time for him to receive Bane’s message.

Later, Penguin returns to his club, free, and is greeted by his minions with a party. He demands to know where the body is, and his minions take him to the coffin, saying they waited for him. He arranges for a funeral, buying two plots, one for himself, one for his wife, and buries her. Alone, he offers the eulogy that everyone thought Penny was small and silly, passed from man to man like a thing. But he thought she was special and had a soul. Speaking to his bodyguards on the way back from the funeral, he tells them that Bane is disappointed with how Penguin’s organization has handled the Freeze situation. Bane also blames Bruce Wayne for manipulating the jury to help Wayne’s pal, Batman. Bane has instructed Penguin to punish Wayne by killing Wayne’s manservant or Penguin will be punished.

In the Batcave, Alfred cleans the teeth of the T-Rex, still stained from Bruce’s fight with Mr. Zoom (“The Button”), hanging upside down from the cave roof. Bruce tells him he’s going out, investigating another woman murdered in the same way as the women in the Freeze case (“Cold Days’).

Later, on the roof of the GCPD, Commissioner Gordon asks how Nightwing is, and Batman ignores him to ask about the case. Gordon continues, telling Batman that he knew a cop who came all the way back from a wound like that. Batman, insisting, learns that the police found a bit of feather under a floorboard at the scene of the crime on their third search.

In the Cave, Alfred hears a warning from a broken window. He hears a message from Bruce, predicting what his master will say just before he says it. As Batman fights his way through Penguin’s minions, Alfred walks through empty Wayne Manor, finding a dead bird in the broken glass. We see a laser sight beam on Alfred’s head from Penguin’s helicopter, as Penguin quotes the love poem “The Phoenix and the Turtle” by Shakespeare, finishing just as Batman enters his office. He orders his men to kill themselves instead of Alfred, and when they do, he invites Batman to sit down, for they have much to discuss.

Analysis: “The Tyrant Wing” – the name solicited for the collection this arc will be collected in, starts out with three quick scenes – Penguin finding out his wife was slaughtered, Penguin fighting Batman, and Penguin in Arkham, bowing before Bane. Like the powerful opening of “I Am Suicide,” in which Tom King and Mikel Janin retold Bane’s origin in the Santa Prisca solitary confinement cell in a few brief but amazing panels, this opening sets a perfectly bleak and somber tone for this issue. Bane has murdered Penguin’s wife Penny (as far as I can tell, not a character previously referenced in current continuity, though there are Penny characters who have been linked with Penguin on the Gotham TV show and in the pre-crisis history, apparently), and this tips the balance that has so far kept Bane’s plan from Batman’s knowledge. And that tiny tip seems poised to set off the monster confrontation between Batman, Bane, and Catwoman (along with Kite Man, KGBeast, Riddler, Joker, Gotham Girl, and all the characters King has introduced along the way).

Four months ago, Batman #50 revealed that Bane had been behind the entire marriage plot between Batman and Catwoman. I predicted then, in the fullness of my disappointment:

“What I’m afraid of is that King’s going to write for the next several months is just a slightly crankier Batman, one who just goes through the motions of being Batman as usual. To win me over, King will need to do two things: 1) Show me a Batman who is qualitatively different from the Batman we’ve seen for the past fifty issues; 2) address the revelation of the final page IMMEDIATELY. Not three months from now. Not three issues from now. In the very next issue, something, even if it’s just one page or panel, to show us that both Batman and Bane aren’t sitting on their status quo, but their plans are continuing to develop. Otherwise, there’s a sense that King did indeed take the easy route.”

We did get several months of a crankier Batman – but my frustration was mitigated by the fact that the arc immediately following the Wedding, Cold Days, was a masterwork, powerfully written by King, and illustrated masterfully by Lee Weeks and Elizabeth Breitweiser. Though the next two narratives, the one-shot “The Better Man” about Bruce and Dick’s relationship, and “Beasts of Burden” were significantly less effective for various reasons, a sense that they were building to something greater kept the tension alive, instead of simply ignoring the milestone of the wedding. King DID show Bane’s plan progressing, as we now know that Freeze’s arrest was part of his plan to discredit Batman. And Batman knew it, even if he didn’t know it was Bane, so he bribed his way onto the jury and made an impassioned, vulnerable plea to save Batman from himself.

Now Penguin has gone through some of the same pain – perhaps greater – as Batman has, in losing his beloved wife. Though Cobblepot is still clearly a vile man, as seen in the way he casually orders his men to kill themselves, his eulogy for his wife Penny is very touching, and his reading of the Shakespearean poem “The Phoenix and the Turtle” hits the right notes of a man of wealth and education mourning a lost love. Penguin is caught between two titans – Bane and Batman – and it seems at the end of this issue, he’s chosen to throw himself at the feet of Batman to save him from Bane since it’s clear now that nothing Penguin does will stop Bane’s hate from turning back upon his allies.

How will this play out? We knew from solicitations that this arc would possibly bring Bane’s involvement to Batman’s attention, but not for another few issues. Having it set up so early in this issue seems to indicate that we truly are at a turning point, though I wouldn’t be surprised to see the next issue telling the story of Penguin and his wife, perhaps playing up the parallels with Batman and Catwoman. The theme of being caught between two avatars – one of justice, and one of hatred – offers a lot to mull over – even if we aren’t as dark a figure as Penguin, we often find ourselves caught between our own desires for supremacy and our need for harmony with the people around us.

Mikel Janin’s art, though uneven over the course of this Batman run (his work on The Best Man and the Wedding was excellent, rich in detail and emotion, but his penciling for The War of Jokes and Riddles was overly sparse and often missing detail) presents the same kind of powerful emotion seen, as mentioned above, in “I Am Suicide.” The same darkness highlighted by the smudged shading and thick lines, beautifully complemented by Jordie Bellaire’s steady hand on colors, sets the mood perfectly, even though classic comedic touches like Penguin’s goofy attack on Batman – everything is balanced just on the knife edge of absurdity and tragedy. Like Elizabeth Breitweiser, Bellaire avoids the overly smooth transitions between light and shadow and instead uses shapes of dark and light to suggest three dimensions, adding to the geometric effect of Janin’s pencils. The artistic team for this arc is perfectly picked, and I can’t wait to see how they handled the rest of the arc.

Final Thoughts: Fourth months after Batman #50, Penguin steps onto the balance point between Batman and Bane in this powerful issue.