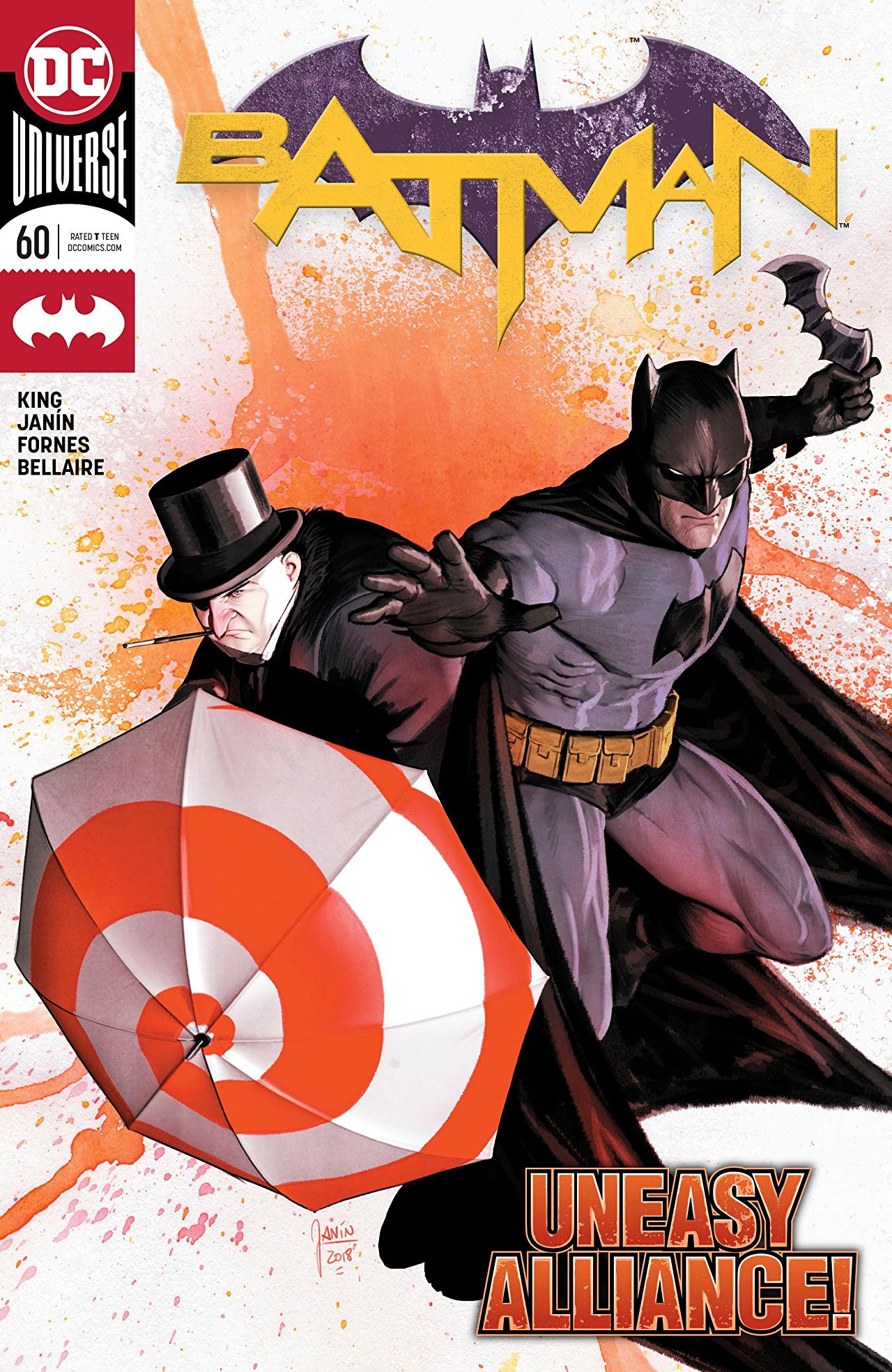 Overview: Batman turns Gotham upside down trying to find the truth about Bane, but something darker lurks in Arkham.

Synopsis (spoilers ahead): At five in the morning, Jim Gordon wakes up and goes to work, starting the day by working with Harvey Bullock on reviewing Batman’s behavior since issue #50.

In Wayne Manor, Alfred watches Penguin in a cage, the mob boss blindfolded.

Bullock and Gordon discuss Batman’s fight with KGBeast, who was picked up by the international intelligence community after Batman broke his neck in Russia. Gordon is shaken by Batman’s violence, though Bullock says “anything’s possible.”

Batman plays yo-yo with Firefly (sometimes without a string), and the criminal insists that Bane never left his cell.

Penguin and Alfred discuss the poem Penguin quoted in the first issue – Shakespeare’s The Phoenix and the Turtle. Penguin thought it was pretty, but now knows it is horrible.

On a rooftop, Batman punches Kite Man, to which he shouts “Hell yeah…”

Gordon borrows a baseball bat and heads to the roof.

Batman’s interrogations continue, with every criminal saying the same thing: Bane is broken, staying in his cell.

As Alfred feeds him, Penguin elaborates on his theory about the Shakespeare poem – that it is about the death of love. As he weeps over his dead wife Penny, a new voice interrupts him. Terrified, Penguin claims he never told Batman about the voice, as it claims that Batman is already here.

Gordon smashes the Bat-signal as more reports of Batman’s violent investigations pour in, shouting “No more!”

Arriving in the Batcave, Batman finds everything dark, with Alfred on the floor, beaten brutally. As Bruce stoops to help Alfred, the butler weakly tries to tell Batman that Flashpoint Batman, his alternate universe father, is standing behind them.

Analysis: With the sudden resurfacing of Flashpoint Batman, an alternate universe Thomas Wayne, Tom King throws the entire structure of the story he’s built of a titanic struggle between Batman and Bane in question. Did Bane orchestrate Penguin’s betrayal as well, or is this a flaw in his plan? The fact that everything seems so perfectly orchestrated to “prove” Penguin wrong implies that this might not have been an accident, and Bane intended to push Penguin too far. Penguin himself indicates that something deeper is going on since he refused to tell Batman about Flashpoint Batman. Does this imply that Flashpoint Batman is a bigger part of the plan against Batman than we realized? His appearance in Batman #50 standing beside Bane was one of the biggest surprises of that issue full of (often unpleasant) surprises, implying that someone involved in this plan has universe-spanning power, not something often associated with Bane.

I wanted to highlight an element of King’s scene transition in this issue. Switching between the three narrative strands of Gordon, Batman, and Penguin, King uses a dialogue “handoff” technique similar to the poetic “chained rhyme,” where every line starts with the same word the previous line ended with. King doesn’t strictly adhere to the format, but every scene transition either repeats an element of the previous scene’s closing line or seems to respond to it, giving the impression of a chain running all the way through the issue. While transitions between scenes through seemingly related dialogue are often found in comics (and film), King’s deployment of it in an issue and arc heavily structured around poetry highlights the polish of its use here.

The art reflects this polish. Though the writing and art team struggled to meet the deadlines for this issue, as series regular Mikel Janin only pencils about half of the pages, guest artist Jorge Fornes pencils the scenes of Batman punching his way through Gotham beautifully. Fornes’s lines are thick, hinting at a sense of smudge without ever becoming loose of undisciplined. Compared to Janin’s more elegant linework, the contrast is very emotionally compelling. Colorist Jordie Bellaire masterfully switches coloring styles between more subtle, modern traditional shading for Janin’s panels and bold, flat panes of color for Fornes’s work. Fornes rendition of Firefly is particularly fun, highlighting his antennae in a humorous way that wasn’t seen in his recent appearance in Detective Comics, though the design is similar. Despite the success of the Janin/Fornes/Bellaire work in this issue, one hopes that King can succeed in the goal he recently referenced on Twitter, of pulling back on his convention appearances to spend more time with family and meet deadlines.  The process timeline of Batman #50 also indicated that the deadlines for this book are being pushed way too close to publication, leading to the artists not having enough time to complete full issues, as we see here and with the last issue of “Beasts of Burden” where Tony Daniel received an assist from Mark Buckingham.

A note on Penny, Penguin’s wife in this arc. A few online forums have batted around the idea that Penny is a bird – perhaps a 20-year-old, 4-foot Emperor Penguin. Penguin refers to her having feathers and a beak in this issue, and we never see the portrait on his desk, despite him being depicted as looking at it many times in the arc. However, in the last issue, Penguin described her eyes as green, and my research indicates that penguin eyes are generally not that color. In describing her feathers and beak seem, in an issue structured around poetry and with poetic structure, to be metaphorical references to her hair and nose, especially in a man as lost as Cobblepot (who himself eats fish like the bird he calls himself.)

Additionally, the structure of the narrative to me prohibits such a grotesque absurdity. Batman and Penguin’s loss of their loves are being paralleled here, even down to the highlighting of Selina and Penny’s eye color – and to imagine a bestial relationship between Penguin and a literal bird destroys that powerful resonance, leaving nothing but disgusting japery. (Now, readers unfavorable to Tom King, or those who delight in black humor might disagree with me, but I think that though King has a taste for the absurd and humorous, he also writes fairly sincerely, and Penny being a bird is the opposite of sincerity.)

The next three issues (61-63) and the four issues following the Flash crossover in February (66-69) will examine the fallout of Penguin, Bane, and Flashpoint Batman’s actions. The possible revelation that Bane isn’t the only mastermind at work throws all of our predictions for a loop, while the title of the following arc indicates that the “Death of Batman” that King has promised since the end of his very first arc may be happening at the three-year mark with issue #75.

Let me know what you think on twitter @ibmmiller, or join the conversation in our Discord!

Final Thoughts: The mysteries are piling up in Batman, and the story seems poised to go in several new directions.