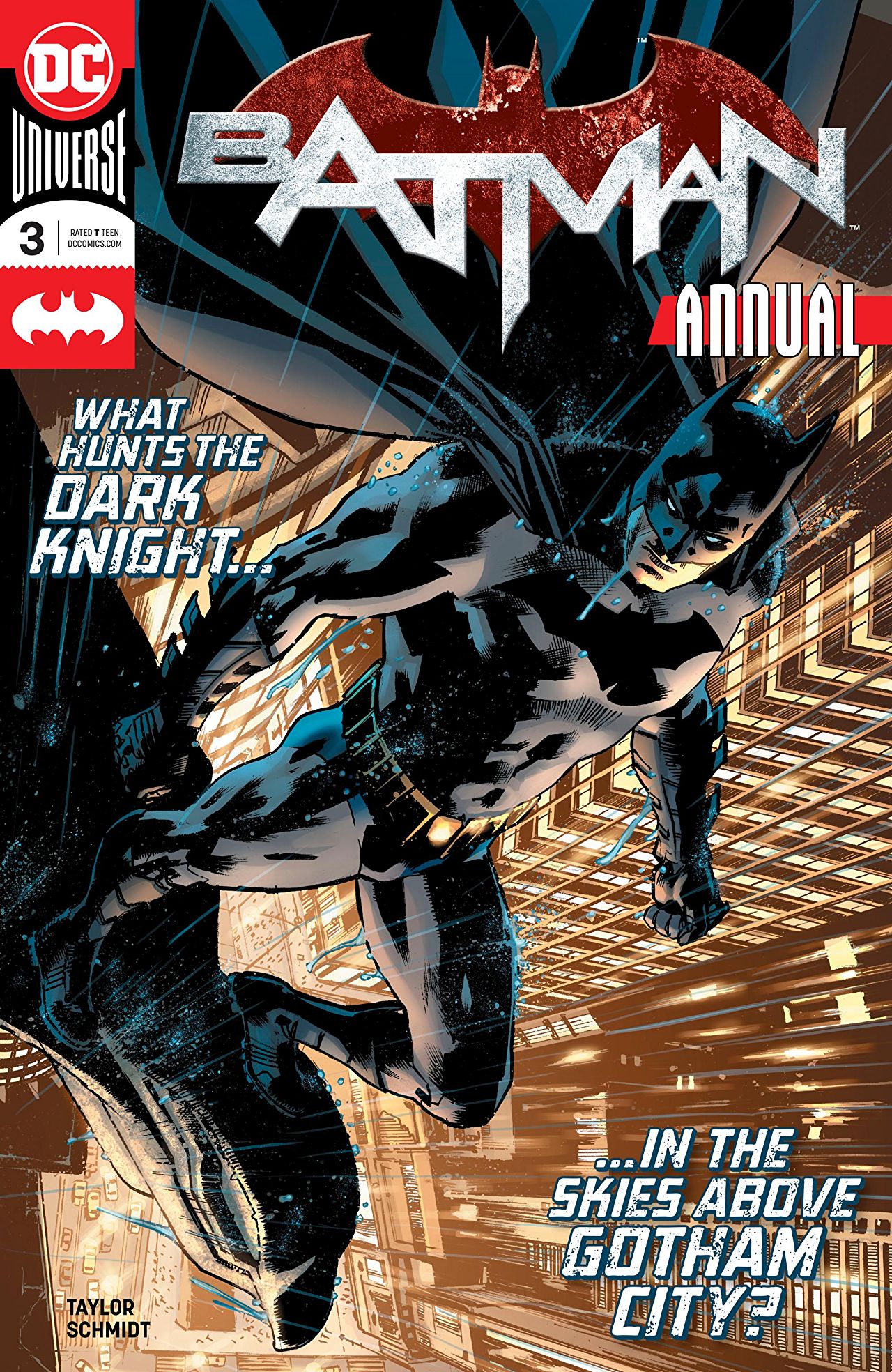 Synopsis (spoilers ahead): Over twenty years ago, a phone call woke a younger Alfred Pennyworth from his life, shattering all plans for the future. When asked to identify his employers’ bodies, he refuses, for he has more pressing matters – Bruce Wayne, drowning in an adult coat.

That night, he promised to leave the lights on for Bruce. When the boy says it seems so empty, he promises to stay with him for the night.

Now, Alfred is woken by Batman’s call as he rides a lethal “predator” drone over Gotham City. Destroying it over the river to avoid property damage, he says he’s coming in – but only to go out again. Alfred passive aggressively attempts to persuade Bruce to stay because he has the flu and hasn’t slept for two days.

As he prepares soup for the sick Batman, Alfred ponders why he looks after this man he raised from a boy. He concludes that since Bruce thinks only of saving others, someone has to remember his own welfare.

Batman roars into the Batcave in the Batmobile, dashing to the Batcomputer and rattling off information about the controller of the drones to Alfred. The villain calls himself “The Drone” (since this is clearly a villain of little imagination), and plans to destroy his USA government employers with the weapons they trained him to use, sometimes on civilians. Batman heads off to the Batplane to chase the drones in the sky, since they are designed to be invisible to radar. Alfred pursues him with a thermos of soup, to at least try to treat his illness.

The backwash of the Batplane’s engines fading into the distance, Alfred prepares for Bruce’s return, hanging up costumes, sharpening batarangs, and passive-aggressively (but also lovingly) leaving mints on Bruce’s pillow (that he doesn’t sleep on).

Chasing a drone, Batman takes sips of his soup, then watches in anger as the drone destroys a seemingly abandoned building. He blows the drone up, then leaps to rescue the sole human in the burning wreckage. However, the body turns out to be the Drone himself, who stabs the surprised Batman and reveals it was all a trap to destroy the one man in Gotham who could stand in his way. Despite the deep wound, Batman quickly incapacitates the villain, even using Alfred’s thermos to knock him out. However, when he leaves the Drone tied up for the police, Bruce calls Alfred for a pickup, having lost too much blood.

Immediately Alfred dashes into action, putting on a partial Batman cowl and leaping into the Batmobile. He arrives just in time, as two thugs threaten to beat the gravely injured Batman. Expertly driving the thugs away, Alfred helps Batman to the car, then urgently puts it on autopilot as he uses the onboard med bay to give him some of the stored blood.  Taking him to Leslie’s free clinic, Alfred tells the doctor it’s a “code black.”

As Leslie stabilizes Bruce, she insists on looking at Alfred’s injuries from the fight with the thugs, noting that it’s no surprise Bruce grew up to be so stoic when Alfred tries to avoid treatment as well. She asks him why he drives himself so hard to help a man who doesn’t take care of himself – and Alfred responds that every man, woman, and child walking alive and happy in Gotham today provides the reason he continues to help Batman.

Later, Bruce wakes up. Walking around the clinic, he finds Alfred sleeping. Leslie tells him that his butler has the flu and several injuries. She admonishes him for not paying attention to how tired Alfred is.

The next morning, Alfred wakes up with Bruce bringing him burnt crumpets. Bruce says he’ll leave Alfred to get more rest, and Alfred says he can’t stay in bed if he knows Bruce is on patrol. Bruce says that he knows, so he’s asked Cassandra Cain and Duke Thomas to patrol instead. Alfred asks if it’s a special day, but Bruce just leaves the room telling him to get some rest, smiling. Alfred sits on his bed, eating his burnt crumpet, not knowing that it’s Father’s Day.

Analysis: Annuals are funny things. They only have a few constants. 1) They’re almost always longer than a regular issue (and thus more expensive). 2) They’re almost always supposed to highlight something special that justifies this greater length. Other than those two things, they run the gamut. From anthologies (like 2016’s Batman Annual #1) to a relationship study spanning the past all the way to the distant future (2017’s Batman Annual #2), to backstories of significant characters in the main run that wouldn’t fit neatly into a normal issue or arc (2017’s Detective Comics Annual #1), or even an oversized conclusion to the normal arc (2017’s Deathstroke Annual #1), there’s a huge variety in what an annual means. In this case, it’s a character study of Batman’s oldest ally, his butler and primary father figure for the majority of his life, Alfred Pennyworth.

Writer Tom Taylor and artist Otto Schmidt provide a heartwarming tale that hits many great notes. While returning to the well of the death of Thomas and Martha Wayne is pretty common these days (the Walmart Batman Specials spent its first two issues connecting its plot to that crime, and in Detective Comics this week, Peter Tomasi ties his inciting murders directly and bizarrely to those deaths), Taylor brings some freshness to the plot by presenting everything from Alfred’s perspective. Unlike the last story told from that perspective, “The First Ally” by Scott Snyder and Rafael Albuquerque, Taylor retains a stronger sense of Alfred’s very British restraint and stoicism in his inner monologue, in addition to a wry wit that has a very polished delivery (no surprise given Taylor’s television writing history). Instead of thinking of Bruce directly as his son, we clearly feel Alfred’s deep love and pride in Bruce without him blurring the lines in his own head that have to be maintained. It’s extremely touching and well worth the time spent reading, even if the background villain “The Drone” is a bit cliched and dull.

Taylor’s characterization of Batman is very interesting, given his deeply damaged characterization in Tom King’s hands, and one would also note several other writers, such as Scott Snyder and Greg Rucka, would not have written such an issue. Though King’s given Bruce and Alfred deeply tender moments, such as in Batman Annual #1’s Eisner-winning “Good Boy,” or Bruce asking Alfred to be his best man in Batman #50, both of those stories are undercut by the pain and violence that undergird King’s vision for the character of Batman. This Bruce, who chooses to rely on Orphan and Signal to protect his city while he allows his beloved butler time to heal, fits more in line with James Tynion’s run on Detective Comics, where Batman’s passion to save people (more than drive away the pain that eats his insides) shines through in the way he embraces his grieving partners and agonizes over the consequences of his decisions. It’s a nice touch, then, that Taylor follows the classic tradition of naming streets in Gotham after influential Batman writers and editors, with an even cleverer touch – Batman calls Alfred for a pickup from the corner of “Tynion and Fourth,” a play on Tynion’s full name, James Tynion IV.

Though his Batman doesn’t quite match Tom King’s, Taylor is almost certainly paying homage to Alfred’s previous stint in the Bat-cowl at the end of “I Am Gotham,” King’s first arc, showing his knowledge of Bat-history. He also gives Leslie Thompkins a cameo, another friend of the Waynes who formed an important part of his life growing up. Unlike her appearance in this week’s Detective Comics, where she violently assaults a supervillain to help Batman, here she’s more in line with her historical character, serving as a voice of reason and opposition to Batman’s more self-destructive tendencies. Her pacifism and philosophy aren’t quite as strongly touched on as they are in such stories as No Man’s Land, but it’s nice seeing a recognizable Leslie again, since her last appearance in Tynion’s Detective Comics run where she assisted Anarky and Harper Row in setting up a community in the wreckage of the Monster Men attack.

Lastly, Otto Schmidt’s pencils here are some of his most appealing work since the start of his run on Green Arrow. His sketchy linework and sharp-featured characters fit perfectly with Taylor’s sharp dialogue, and the warmth of Schmidt’s colors complements the warmth of this story’s heart.

Final Thoughts: Providing a temporary respite from the bleakness of the current storyline (and Batman’s life in general), Tom Taylor and Otto Schmidt give Alfred time to shine.