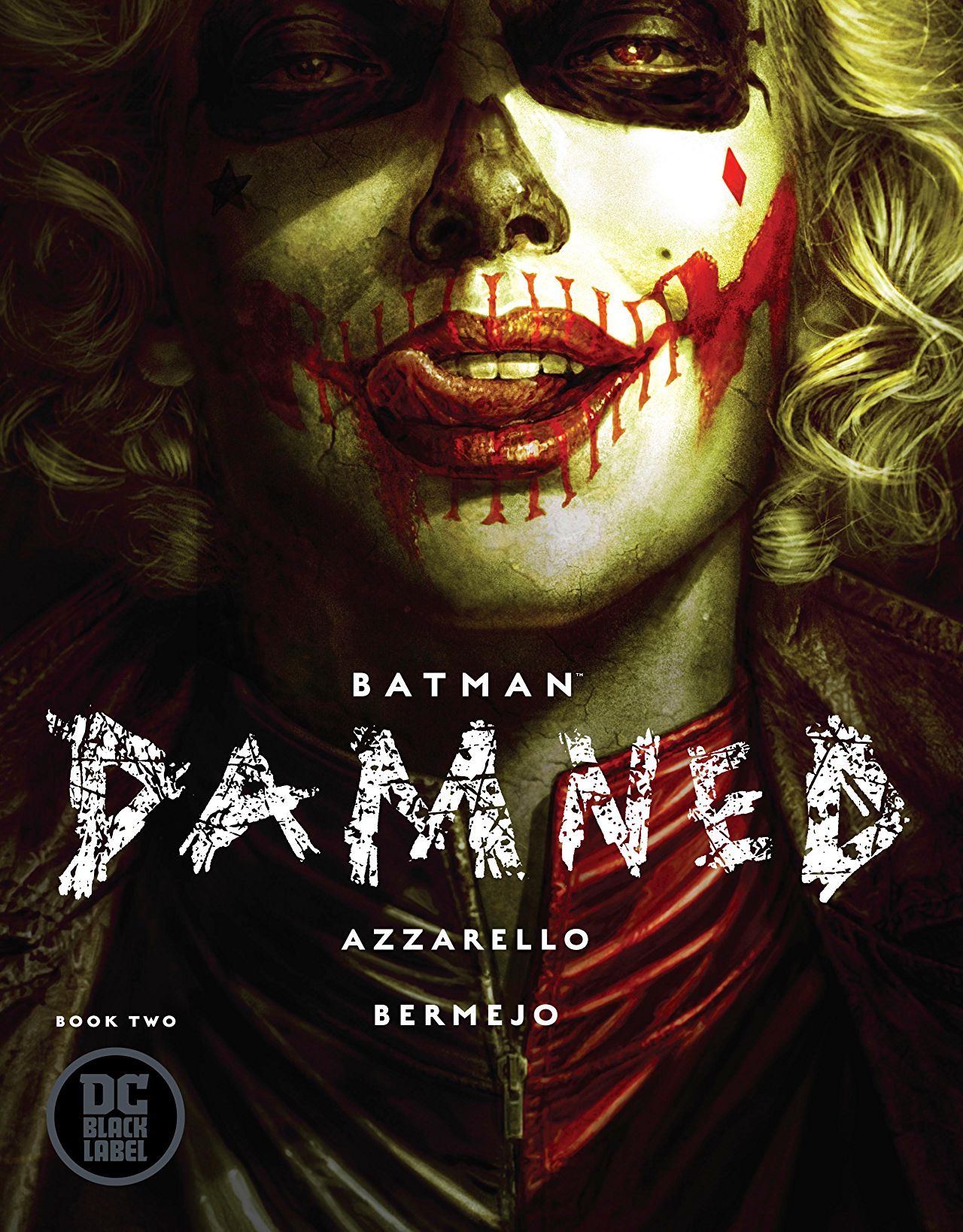 Overview: Batman continues to be haunted by the supernatural as he sets out to prove that the Joker is still alive.

Synopsis (spoilers ahead): The issue opens with a bat stapled to a wall that appears to be writhing in pain as the narrator, John Constantine, waxes about pain being the thing that everyone has in common.  The story then cuts to Constantine and Batman standing on top of a cathedral, with Batman having come to the conclusion that the Joker is alive.  Constantine sends Batman to a nightclub, the Cavern, where a man he knows might be able to give him some answers.

The story then cuts to a flashback of a young Bruce dressed as the Lone Ranger outside of Wayne Manor, watching as his parents fight, with Thomas Wayne storming off in his car, both of them screaming that they will keep the house.  Bruce, upset and not understanding his parents’ argument, walks up to his mother in a chair and points his cap gun at Martha Wayne, pulling the trigger, causing her to startle and drop the photograph of her and Thomas that she was holding.  The crying Martha makes Bruce promise he will never point a gun at anyone ever again.

In the present, Batman takes out a bouncer and enters the nightclub, “the Cavern”, to find that the man he is looking for is the Demon Etrigan, reimagined as vaguely demonic looking rapper going by the name “J. Blood”.  Batman approaches the stages as J Blood continues to rap, with Batman grabbing Etrigan by the collar and demanding to know the location of the Joker.  Batman finds himself surrounded by a crowd pointing guns at him and after stating that J Blood is in harm’s way, the crowd turns their guns on each other at J Blood’s order, telling Batman to stand down.  Deadman arrives and takes control of one of the armed members of the crowd, telling Batman that he has his back and that Batman has to leave.  Batman knocks the gun out of Deadman’s hand as an explosion rocks the nightclub.

The explosions continue as Batman makes his way to the street, to find the Gotham skyline on fire.  Batman notices the creepy girl who appeared in his dreams in the previous issue (presumably Enchantress) who speaks cryptically to him before disappearing, with the crowd around Batman wondering why he is just standing around amongst all the chaos.  Deadman calls Batman’s attention to the sky, where the Bat-Signal is shining in the sky with a giant, toothy smile cut into it.

Batman and Deadman enter a nearby burning building to rescue people trapped on the upper floors.  Batman grapples up and calls out for the trapped people, only to find that person is a pail man in a green hood and coat that appears to be the Spectre re-envisioned as a homeless man.  The Spectre yells that he knows what Batman has done and Batman begins to hit the Spectre, demanding that the Spectre tell Batman what he knows as the building around them burns and collapses on top of Batman.

In another flashback, young Bruce plays video games at a diner as Martha meet with what appears to be a private investigator who shows Martha some photographs which cause her to cry.  The P.I. gives Martha a cigarette which he then lights, flashing the story back to the present.

Batman wakes to find Etrigan standing over him, having dug Batman out of the still burning debris of the building.  Etrigan drags Batman to the street where Constantine is sitting on the curb.  Batman wants to go back to find the Spectre to get answers but is reminded by Constantine of the defaced, smiling Bat-Signal still shining in the sky.

On the roof of Police Headquarters, a gang of devil-masked thugs shoot at the police below while a green-haired figure in a purple trench-coat looks on and laughs maniacally.  Batman takes down the thugs but is taken out by a baseball bat to the back of the head, courtesy of the laughing figure in the trench coat, who it turns out is Harley Quinn.  Batman catches the bat before its next swing, and after exchanging blows with Harley, is stunned by Harley begging Batman to keep hitting her as she doesn’t want to live without the Joker.  Harley then takes Batman by surprise and stabs him in the neck with a syringe, injecting him with an unknown substance which disorients him.

Harley then climbs on top of Batman and straddles him, licking his mouth and undoing his utility belt, and begins to unzip her own costume, when Batman suddenly grabs Harley by the throat and begins to strangle her. The issue ends with the reflection of a skeletal looking Enchantress clawing at Batman from the reflection of the puddles on the rooftop as he continues to choke the life out of Harley Quinn.

Analysis: Now, I loved the previous issue, which I thought did a great job setting up an eerie tone and establishing the mystery of the story.   This issue is a lot of the same.  While I think its probably a little unfair to make a judgment on how the story is paced out until it’s finished, there’s only one more issue of this story left to go after this one and there’s a lot of ground left to cover.  I can’t help but wonder if the narrative is going to get messy and cramped in the wrap-up, but time will tell on that one.

One of the things that I’ve enjoyed about the previous collaborations between Brian Azzarello and Lee Bermejo is how the characters exist in a more “realistic” world.  Killer Croc is a large man with interesting eating habits and really bad skin for instance.  It was this kind of take that made the decision to take on a supernatural story a bit curious, as it seems a sharp left turn from their previous efforts.  Two issues in, there’s a curious double standard to the way the story is treating the more supernatural aspects of the story.  I like the idea of taking the supernatural characters of the DC Universe like Etrigan and the Spectre and putting then through Bermejo’s hyper-real filter.  It adds a level of mystery to the characters where I think the reader has to guess if they are supernatural or just crazy, and that really works in a story about whether or not the Joker has risen from the grave to haunt Batman.   The problem is that the story has already introduced enough supernatural elements like Deadman that make it clear that this story has a supernatural angle to it. Because of this, these tweaks on characters like Etrigan come across as if the creators were embarrassed and decided to tone some of these characters down.  If they wanted to go down this route, they should have played the story more subtle, and set the story more around Batman’s perspective, and not shown Deadman’s ghostly form for instance, but have people keep coming up to Batman claiming to be Deadman as it would preserve the feeling that maybe Batman is just going crazy that I think the story wants to play with.

The story continues to get a lot of mileage out of the mature reader label.  Let’s get this out of the way with now, Batman keeps his pants on in this issue.  That being said, there is plenty of violence and “F-Bombs” dropped throughout the story.  The biggest use of this creative freedom is in the portrayal of Harley Quinn in the story.  This version of Harley is far more disturbed then what we are used to seeing, but its one that I think works for the story that they are telling.  There is a violent and disturbingly sexual nature to this version of Harley Quinn and I found myself wondering what exactly was done to this poor woman to make her this way.  This story seems to be trying to build up until the devil of this story, the Joker, makes his appearance and Harley feels like a way to build up how evil this version of the Joker truly is.  That being said, Azzarello is well known for adding shock value to story for its own sake, and I think that if you are going to use sexual violence in a story, you should have a better reason then just because you can, and I worry that as a complete story that there are moments in this story that are just going to feel cheap and exploitive.

The most intriguing element of the story is the cryptic flashbacks involving Batman’s parents, which appear to be telling a story about the Waynes’ marriage falling apart in the wake of Thomas Wayne having an affair.  Now, this isn’t something that I’d ever want to become canon, but its an interesting take on a part of the Batman mythos that doesn’t see a lot of variety.  I particularly liked the interaction between Martha and Bruce, with Bruce angry and confused over problems that he his too young to understand, and her understandably upset over Bruce pointing a toy gun at her.  It isn’t hard to see how this could be a big part of Batman’s aversion to guns and it’s an interesting layer to add.

Lee Bermejo’s art continues to be a standout. It’s hard to just pick one page or panel but in this issue, it would have to be the splash page of the defaced Bat-Signal over the burning cityscape.

Final Thoughts: While I don’t think that this issue was nearly as strong and the first issue of this story, I’m still very much engaged in the mystery of this story and I’m look forward to seeing how this all plays out in the final issue.