Review: The Batman Who Laughs #1 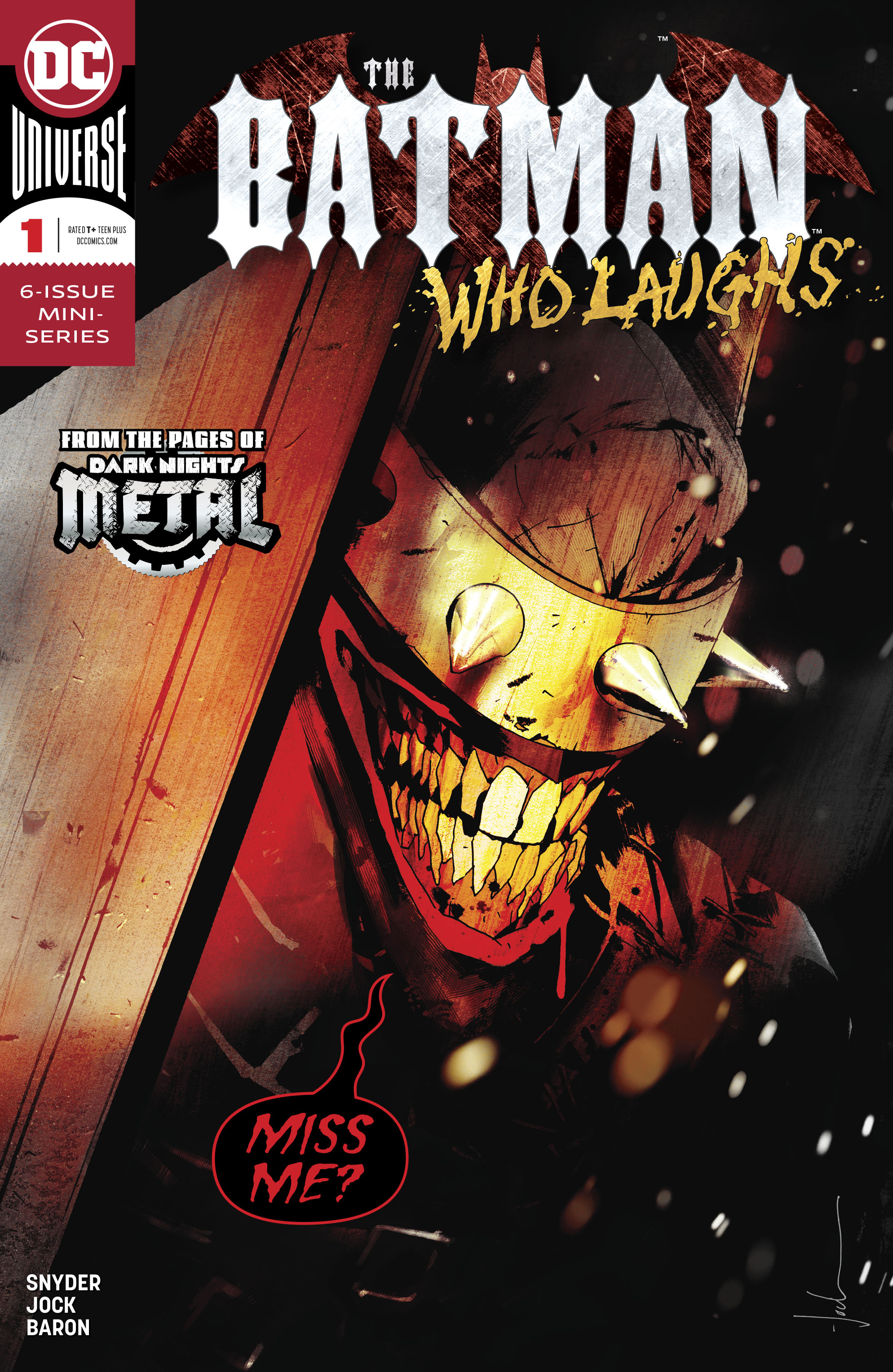 Overview: Bruce finds an alternate version of himself, and the Joker makes a surprising and bold move to stop the Batman Who Laughs.

Synopsis (spoilers ahead): What is your happiest memory? For Bruce, it was his first memory. He says he was running towards the manor. It was a warm summer evening and past his bedtime. His parents and Alfred played Red Rover, a game where one has to break the bond of a line formed by people standing hand in hand. If the person breaks through, they win. If not, they have to keep trying. For Bruce, he tried and tried but could not break through their grasp. What he remembers most about the night was the laughter. Their laughter resonated throughout the entire manor.

Presently in Gotham, Batman is chasing three shooters on a mobile home (the extra-sized ones that take up a lane and a half) through downtown Gotham on his motorcycle. Batman asks Alfred for an update on the situation. Alfred reports there are extra compartments in the flatbed carrying the home. Alfred mentions the compartments are reinforced; thus, he is unable to see what is inside of it.

The truck plows through two cars, causing them to go over the bridge. Batman releases a cable which attaches to both cars, making sure they do not fall onto the streets below.

Batman asks Alfred to look up the schematics on the last two houses to see if they are penetrable. Alfred says the second house has reinforced framing; he will not be able to smash into it. Knowing this, Batman ejects himself out of the motorcycle and soars onto the truck.

Batman recounts to himself how he heard of this smuggling ring. They use extreme load trucks to carry contraband from Gotham to the outside world. The trucks have pockets within the flatbeds for compression. These people are smuggling deceased people out of Gotham to be hacked up and sold for pieces. These anonymous people were to be taken to Gotham’s Potter’s Field. This field was established as the burial place for all anonymous citizens. These people lived in Gotham, and they should be able to rest in Gotham when they die.

When Batman lands on the truck, he takes out all of the shooters. Inside the truck, he finds one of these compartments and finds a coffin. He opens it, only to see a body which looks exactly like himself.

At the Gotham Morgue, Bruce (disguised as someone else) investigates the body he found. The deceased has the same DNA as Bruce. Bruce realizes the other Bruce is missing scars. The scars from the last few years are not there. He is Bruce Wayne, but a Bruce Wayne who chose a different path. It seems this Bruce quit being Batman around the time Bane broke his back. Bruce realizes the other Bruce was likely into civil projects, due to the eco-fiber beneath his hands. He was married with a child as well. This Bruce had smile lines. Whatever this Bruce was, he was happy.

Alfred refocuses Bruce on the task at hand. Bruce tells Alfred he knows who did this and who is back. He needs to leave for Arkham Asylum now.

At the Asylum, a Batman cuts down all the guards at the entrance. Other guards rush in, noting Batman never dawns guns. Batman tells them he does now, and he kills all of them. This Batman enters the cell of the Joker, and the Batman Who Laughs (Jokerized version of Batman from the Metal event) kills the Joker with an ax.

On the roof of the GCPD headquarters, Gordon gives Batman the Batman Who Laughs’ calling card which was left by the body of the Joker. Gordon asks who this man is, and Batman tells him he is an alternate version of Batman who was corrupted by the Joker toxin. Batman tells him it is his belief the Joker’s heart contains a singular super-toxin which will be realized when he dies. This will allow whoever who kills him to become the next Joker. Batman tells Gordon this Batman is just like him in every way – the same intelligence, training, and resources – except for no morals. He is here for some reason. He also brought the Batman who had guns. The surviving guards and inmates call this Batman “The Grim Knight.” He says he is going to need help figuring out how to stop the Batman Who Laughs.

Batman knows the Joker in Arkham was not the true Joker. The true Joker escaped Arkham some time ago. He realizes the only place Joker would head to was the Batcave. He tells Alfred to undo the waterway security system. The Joker swims out of the water and asks if he was supposed to say “knock-knock” first. In a hideout, Batman tells the Joker he is safe. Joker tells him that that is not his goal. He pulls out a gun and aims it at Batman. He pulls the trigger and shoots himself in the chest. Batman rushes over to stop the bleeding and asks why he did it. Joker tells him the only way to stop the Batman Who Laughs is to become him. Batman realizes he was just exposed to the super-toxin. Alfred asks if Batman is okay, and all Batman can do is laugh. He has been Jokerized.

Let me go ahead and address the art. I think this issue is absolutely beautiful. I love the grittiness of this issue. This style reminds me of Greg Capullo’s work. The art is simple but dynamic. Jock really emphasizes and enhances Snyder’s story. The Grim Knight looks amazing. Look, I know Batman does not kill, but The Grim Knight looked awesome tearing through Arkham. Overall, this is one of the best-looking books I have read all week.

I really enjoyed what Snyder is doing. I love his take on Batman, and I thoroughly enjoyed Metal. And, this issue continues the same themes as his other work.

The Grim Knight looked awesome, but I have no clue why he is here and why he would align himself with the Batman Who Laughs.

In the Batman Who Laughs one-shot, it is revealed there was no cure Bruce could take to revert this toxin. I am curious how Bruce will counteract these effects.