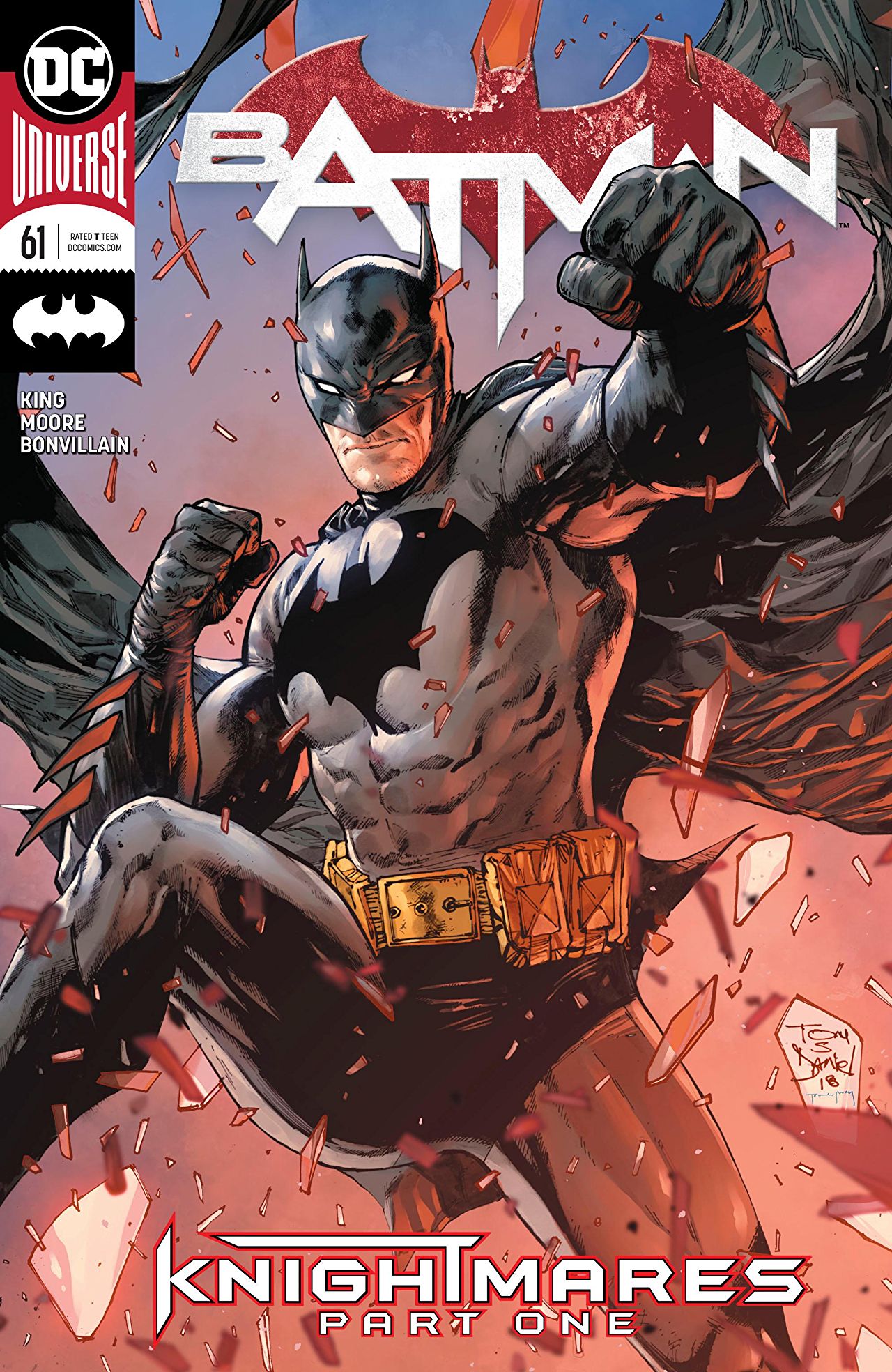 Overview: A young boy faces the aftermath of his parents’ brutal killings in a back alley of Gotham…or does he?

Synopsis (spoilers ahead): A young boy stands over his dead parents in a dark alley at night.

At the police station, the boy tells the story that he’s Bruce Wayne to Jim Gordon.

On the roof of the station, the Bat-Signal lit up brightly, Gordon tells Batman about the crime.

The boy discovers Batman looking at his mother’s pearls for clues.

In a scuzzy bar, Batman finds a man boasting of stealing the pearls.

Batman holds the man from a bridge, and the man says mobster Frank Gialla was connected to the crime. Batman says he won’t drop the man, just after dropping him into a dump truck.

In Gialla’s office, Batman beats up his thugs, then turns to Gialla with questions.

Later, Batman jumps atop a speeding train. He looks in the windows at a man who claims to feel safe.

The boy receives a visit from Jim Gordon, who tells him that Batman got the man who killed his parents.

In court, the man confesses to the crime as the boy watches.

Over the next days, the boy struggles through normal activities at school and home. Sitting alone in a dark room with huge windows, he thinks of a plan.

In prison, the boy visits the man and viciously murders him with a tiny razor blade.

Suddenly, the scene changes. The guards are pulling the boy off of his victim – but instead of a black haired Bruce Wayne, it’s sandy-haired Matthew Warner (from Batman #38), with ugly self-inflicted scars on his cheeks.

A detective interrogates Matthew, but cannot break through his delusion of being Bruce Wayne avenging his parents – seven times so far. Using his dead parents’ wealth, he’s bribed guards and other prisoners to help him slaughter his victims. The police reluctantly turn him over to Arkham, as he whispers to the parents he murdered that he loves and misses them.

Analysis: After the stunning revelation to Bruce that his alternate timeline father, Thomas Wayne/Flashpoint Batman, is working against him in Gotham, Tom King abruptly shifts to look at the case of Matthew Warner from Batman #38 again. In that one-shot issue, also illustrated by Travis Moore, Batman follows a trail of bodies to several deliberate dead ends until he realizes that Matthew believes that he must become Bruce Wayne, and murdered all of these people to accomplish that end. Now in prison, Matthew uses his inherited wealth to slaughter, again and again, to prop up his delusions. The story is effectively told, with enough odd details (Batman working on the case of Bruce Wayne’s parents?) letting us know that something’s not right. However, the revelation of Matthew’s serial killing doesn’t seem to give us much to work with, and other than the transfer of Matthew to Arkham (and presumably Bane and Flashpoint Batman’s circles), nothing significant seems to drive any storyline forward yet. Additionally, though King claimed on Twitter that this series of one-shots will reveal how to drive Batman to his knees, the real Batman never appears in this book, as most of the story takes place completely in Matthew’s evil imagination.

Artist Travis Moore returns to the story he helped start, taking a break from his work on Nightwing. Though Moore’s linework is as clean and appealing as ever, the design of Matthew’s scarred face isn’t too impressive when it’s drawn to be scars instead of fresh cuts. The coloring (Tamra Bonvillain replacing Giulia Brusco from #38) is a bit messier and less detailed, with somewhat distracting use of broad repeated textures in different contexts, such as the fuzzy stippling effect used for walls and, perplexingly the beam of the Bat-Signal (another clue all is not right, as Gordon smashed the light last issue), or the watery dullness of the alleyway. Some of these may be intentionally odd, to produce the dreamlike effect appropriate for the reveal at the end – but the lack of blood on Matthew’s victim when all is revealed continues to perplex the attentive reader.

While a creepy story and fun reveal, King doesn’t really move anything visibly forward in his overall story here. Though it’s highly likely that Matthew being moved to Arkham will come into prominence later, there’s a real sense that this story and Travis Moore are the unlucky servants of scheduling – as this issue was inserted into the schedule to allow the art for other stories to be completed (in this case, Mitch Gerads for #62, which was originally solicited as #61). Hopefully, in hindsight this scarlet narrative thread of murder will form a more immediate part of the conclusion, as the two issues don’t seem to mean much right now.

Final Thoughts: Tom King returns to the story of Matthew Warner as the twisted boy leaves a bloody trail of bodies behind him in prison.