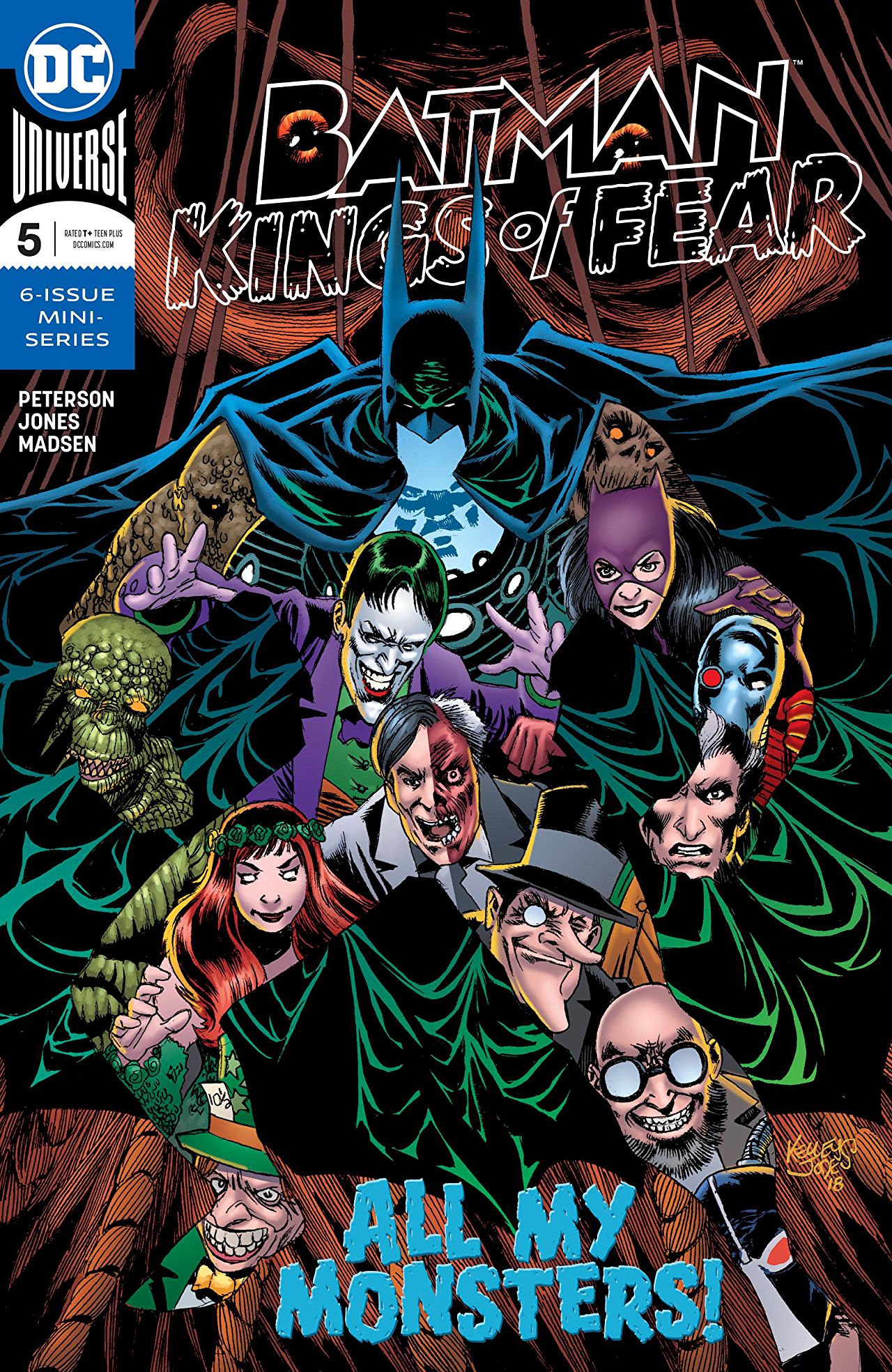 Overview: In their first sit-down, Scarecrow psychologically breaks down the Batman.

Synopsis (spoilers ahead): Scarecrow shows Batman what Gotham could have been without him – a clean, shining beacon of the world. Gotham could have been THE gold standard in the country that is the world power. But this is Batman’s mind they are in, after all. He doesn’t want to think about what could have been. He begins fighting Killer Croc – changing the subject. Scarecrow asks him what he is doing. Batman believes Scarecrow’s question is pointless. Crane goes on to explain that by fighting those of his “Rogues Gallery”, he’s validating them; giving them what they want – attention.

Batman asks if he’s just supposed to let them run loose in his city. Scarecrow responds that Gotham is no more his city than it’s other citizens. Gordon and his police force are more than capable. He’s the World’s Greatest Detective, can’t he figure it out?

He asks what Batman is feeling. We see Batman pushing, pulling a massive ball and chain up a mountain made of gravel. A cage filled with his villains appears on his back as he struggles, even more, to make his way up. The ball and chain drags him to the edge of the mountain as he tries to pull himself and the ball up with him. The ball becomes a city beneath him – Gotham City. He strains and strains, but he can’t pull it back up from the depths below him.

Scarecrow tells him that this is killing him, but he knew it would. Maybe even hoped it would. Batman says that if he wasn’t around, then Bane would – Scarecrow interrupts. “Bane would go home.” Bane came here to prove himself against Batman, without Batman, Bane would not have come. He would have died trying to escape Santa Prisca. Freeze assisted NASA with cryo-science. Ivy would have helped with climate change and pharmaceuticals. Riddler would have gotten into video game design. Harvey would have gotten skin graphs done on his face and kept on being the brilliant DA he always was. Selina would have worked with abused women and children. Joker would have helped track down serial killers before they claim a third victim. Crane himself would have developed a new treatment for schizophrenia. Maybe. He doesn’t blame Batman for how he turned out. Penguin would have still been a mob boss. But Bruce Wayne. He could have fully funded prenatal care – helping mothers, universal Pre-K, free college for Gotham residents, and high schools that Ivy League Colleges would envy. With such an investment in the future, a well educated and healthy people would have an economic boom, lowering the crime rate.

One man can make such a difference. Don’t believe him? Just look to Einstein, Gandhi, Hitler, or Shakespeare for examples. How about Joe Chill? Bruce sinks to his knees. “I should have never become Batman.”

He then begins throwing punches at Crane, but strikes nothing but the air over and over again. Crane admits that he had enough drugs in his system to put Croc out of commission for a week. Batman distracts Crane until he finds some syringes lying on the floor. He threatens Crane with it, but sees that he isn’t fazed by it. He then, instead, injects both of them into himself. He quickly starts to regain his sanity. He grabs Scarecrow by the collar and pulls him close. “WHAT DID YOU DO TO ME?!”

Analysis: Scott Peterson continues to explore questions many have wondered. Again, the ideas he presents here are not new here – they have been brought up in Batman stories before – but to my knowledge, they have never been explored in such depth before. I don’t know that all of Batman’s rogues would have chosen the life path that Crane lays out for us. I just don’t buy it. The only one that seems plausible to me is Harvey, and even that doesn’t seem like it falls on Batman’s shoulders to me.

I like Kelley Jones’ storytelling here. Peterson trusts him to tell a good few pages without assistance and he does a very good job of telling the story on his own. The exaggeration through hallucinations was intriguing. It was fascinating to explore what was going on in those pages. Jones still struggles with consistency, and that it distracting. Anatomy is sometimes off; just things aren’t always where they were the page before. That constant change adds to the disorienting effect that Bruce is experiencing, but it’s not always intentional.

Michelle Madsen continues to do a striking job on the colors. The constant use of vibrant neon rainbow effects are beautiful to look at with Jones’ heavy inks. The massive amount of black balances well with the colorful spread. Rob Leigh letters here, and does a fine job. He doesn’t do anything funky to distract from the comic. It’s a safe choice.

Final Thoughts: This has been an excellent character study of Batman. I’m anxious to see how things end here. With an out-of-continuity book, there’s no telling how it could end. Will it go the safe route and play out as all Batman books do; with him emerging victorious and broken – or will he concede defeat, letting Scarecrow win and Gotham along with it?