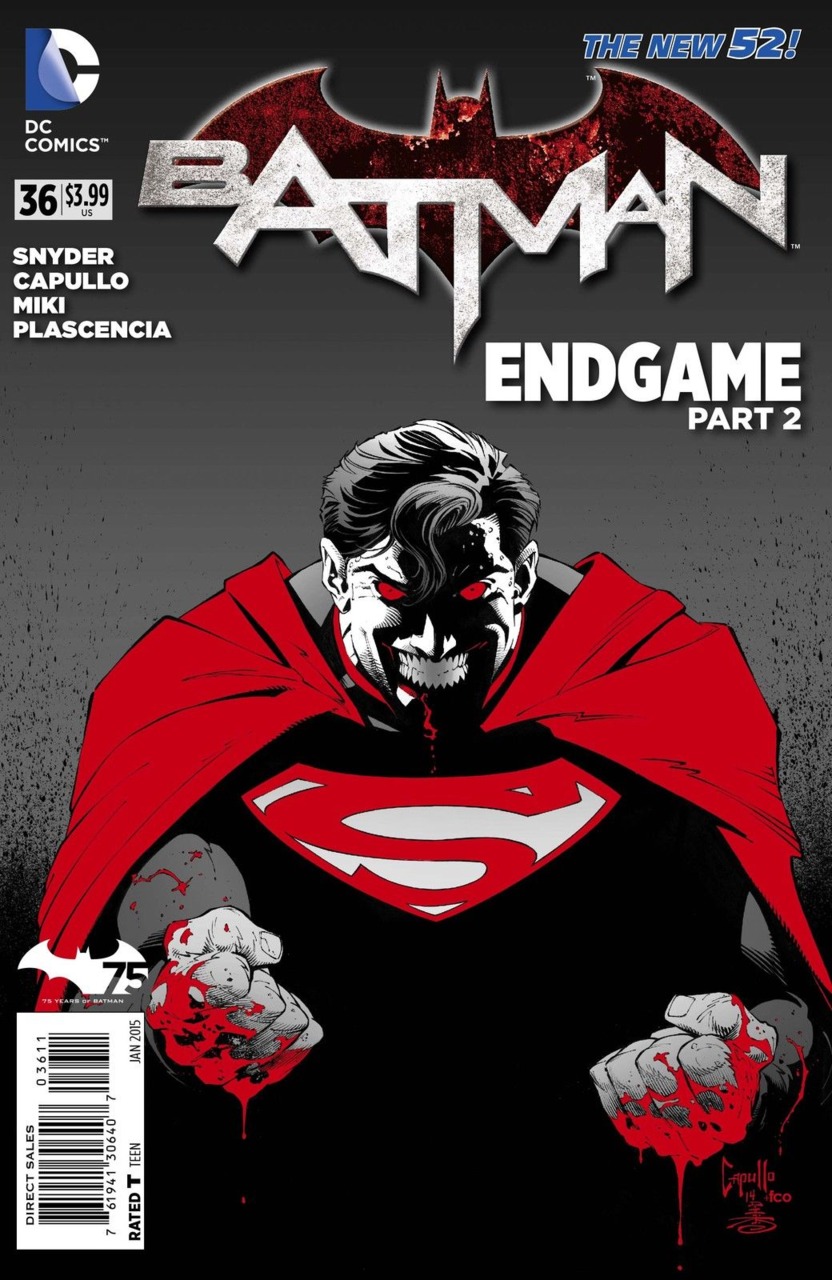 Endgame continues, and I really like what’s going on… That saying, I don’t know what to expect, and I like it  I think I’m going to try to avoid reading the solicitations from now on, as I seem to enjoy the ride a lot more  Snyder is keeping us guessing, and Capullo keeps on wowing us with his awesome artwork.

We open with what seems to be another hallucination by Bruce. He is fighting Croc and his children underwater, when he is finally overtaken. What makes these deaths so believable, he says, is the sound.

He comes to, as Superman is driving him through the ground with a chunk of building. Once out of sunlight, however, Batman activates his miniaturized red-sun knuckles. But once they get outside, Superman uses his laser vision to take down a building. He carries Batman into the sky, and tells him to beg, but Batman spits what Alfred calls “Kryptonite gum” into Superman’s eye, and they plummet to the bay below.

Batman goes to investigate Joker’s cell (or what’s left of it after the collapse) for clues. But he just gets angry, and tears the chained bed off the wall. But an Arkham employee sees him there, and asks if he’s okay. It’s Eric Border, the transfer from Metropolis back in Batman Annual #2. But he traps Batman in a cell, and a paralytic gas fills the room. Turns out Eric Border is actually the Joker. Batman begins sweating, has trouble talking, and can’t move well and Joker begins telling him what is to come.

People all over Gotham City are becoming Jokerized, and are terrorizing the city. Joker then pulls out a gun, points it at Batman’s head, and then… BANG!

The backup story is another inmate telling Joker’s origin, and hoping it’s correct to live. He noticed how her husband started acting strange… She believed he turned into a robot, and that he later turned their kids. So she killed them. And Joker visited her in Arkham, and he is a robot too. He wants everyone to be a robot, to be better, like him. Then, the Jokerized citizens of Gotham burst through the window.

The Batman vs. Superman fight didn’t last long. I really thought it was going to be the thing this arc. Joker fighting Batman through his peers, but it seems he has something else in mind. Joker taking out the League is kind of unnerving, knowing he can do that makes me wonder what he has planned. Eric Border being Joker blindsighted me. I’m sure they’ve had this planned since his introduction, and that blows my mind that I didn’t notice anything fishy. However, the whole Eric Border = Eternal Prince Jester thing was nonsense. Batman is all like, ‘how did I not see this?!’. If it was done in Batman ’66, I think it would be funny. But here, it’s not played at for humor, it’s serious and it doesn’t make much sense. That knocked it down a bit for me.

Joker still has his old face, and a new one has grown back, as skin does. Makes me wonder whose face Joker’s Daughter is wearing though… The fact that people are being infected and becoming Joker is awesome. Still, hardening me back to Batman Beyond, and Joker getting Cadmus technology. And in the Dark Knight trilogy, they stressed the idea that “Batman could be anyone”, and Snyder combats that by saying, “Anyone can be Joker”.

The backup was good as well. Kind of made me want to see this as a regular title, seeing Arkham inmates, and how other criminals have played with their already sick minds to get them to do what they want.