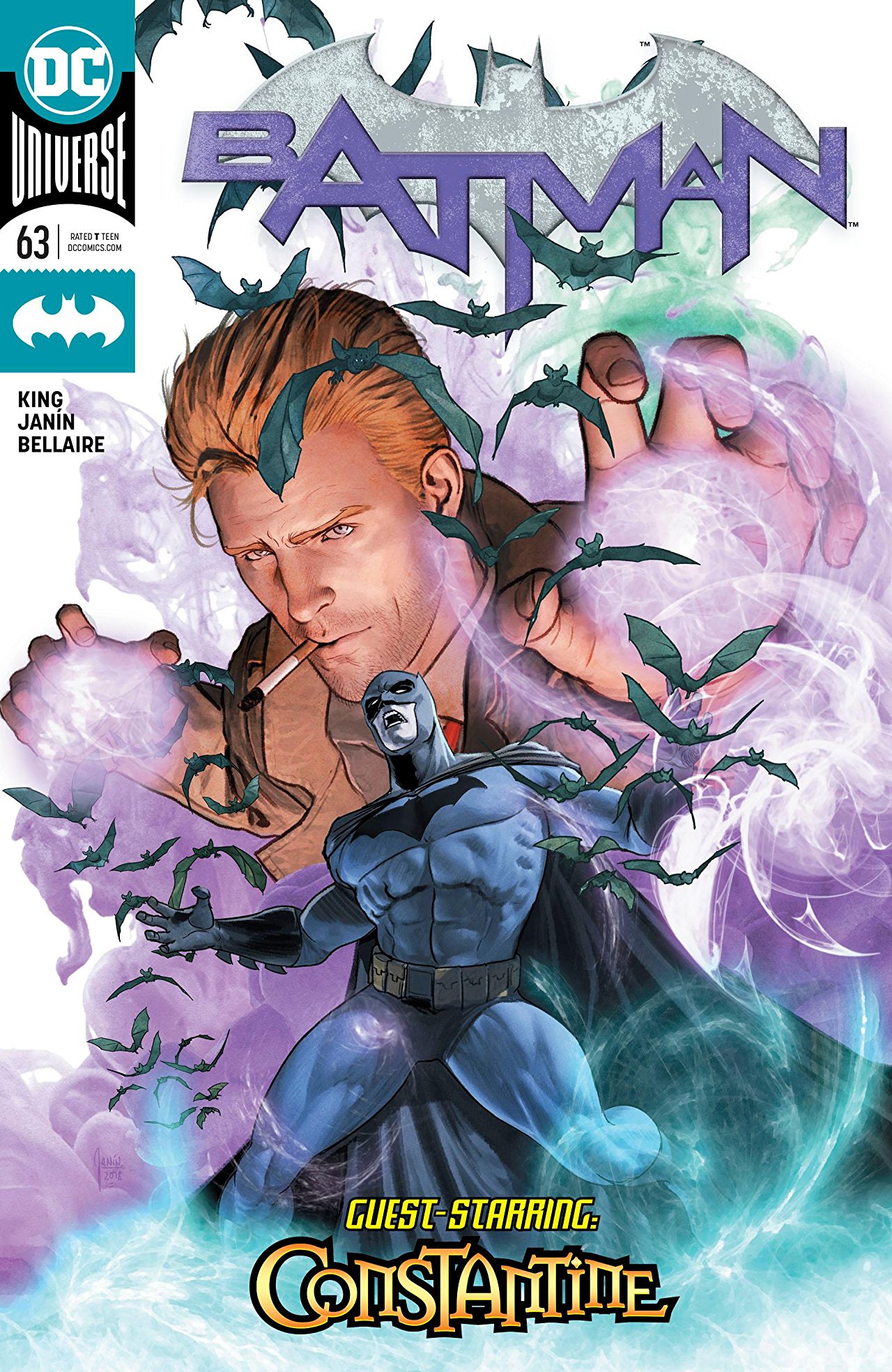 Synopsis (spoilers ahead): Months ago, atop Finger Tower, Bruce Wayne waited. A letter lay on his pillow, and he knew that the woman who had promised to marry him wasn’t coming. As he prepared to leap off the rooftop, one word halted him: “Bat.”

In her wedding dress and veil, Selina appears, saying she wanted to be good, to leave him for the good of the world, but she needs him and came here instead.

Over their embrace, John Constantine begins speaking. He tells Batman of a dream of his mother, who died when he was born, and the daughter he never had, over a vision of Bruce and Selina on their honeymoon, on a sun-streaks beach. Over an image of Batman and Catwoman kissing in the rain, standing on a gargoyle, he continues narrating his dream, telling of his abusive father.

Later, as Selina showers, Bruce moves to join her, but Constantine continues his warning. As Bruce ignores him again, Selina breaks their kiss and smells smoke.

In a baseball stadium at night, Two-Face challenges Batman, who knocks him out easily. Constantine asks, “Where’s the wife?” Batman says she’s covering Two-Face’s other clue. Constantine presses, reminding him of the puzzling case of “Master Bruce” from issues #38 and #61. He asks why it took so long to determine that Pyg was Damian in issue #62. Batman strides off, declaring that Catwoman will be fine.

In the library of Wayne Manor, Selina tries to convince Bruce to change the code on the grandfather clock, so that it’s not a permanent memorial to his dead parents. As she descends into the cave, Constantine tells Bruce he’s given up trying to persuade him. “Live the dream,” he says with bitterness. Bruce punches him in the face, demanding to know why Constantine is so detached and selfish, and not a hero, using his powers to save the world.

In the Batmobile, Catwoman asks what’s wrong. Batman says everything’s normal, and they discuss life in Gotham. In a gap in the conversation, Batman asks Catwoman to kiss him. They kiss, and when she asks, “Is that enough,” he responds, “No. Never.”

Constantine gets in an elevator, begins to light a cigarette, and when his fellow passenger objects, says that since it’s all a dream, he’s not really smoking.

He gets out of the elevator, finding Batman holding Catwoman in his arms, dead. A sniper got her, like KGBeast got Dick, but succeeded where Beast failed. Batman asks Constantine what is happening, and he responds that someone has captured Batman, strapped him to a machine, and is using Scarecrow gas to drive him mad. Batman asks if Constantine is there to help him, but the dream responds that Batman is alone, and he will go mad as all dreams become nightmares.

Analysis: This month, DC released the seventh installment of their Superman 100-Page Giants in Walmart, including another part of Tom King’s Superman story, “Up In The Sky.” This issue features Superman worrying about his wife Lois as he quests through space, imagining villain after villain murdering her violently. Clearly, the fear of evil stealing a hero’s wife is on Tom King’s mind, as this issue of Batman features a variation on the same theme.

King teams with Janin in the third of his “Knightmares” issues, showing us beautifully but so painfully what could have been if Bane’s plot hadn’t succeeded in destroying Batman and Catwoman’s wedding. We see flashes of the honeymoon and marriage, the playfulness and heroism, the healing and love. Janin, who drew the narrative panels of the wedding issue with glorious parallelism, picks up where he left off, Jordie Bellaire providing alternately lush and bleak color palettes with perfect judgment. The issue works both as a vision of what could have been, and the “knightmare” of the title. One odd note is the image of Bruce punching Constantine in the face – did Janin deliberately imitate (but not copy) the image of Batman punching Jim Gordon in the face? Since the man in the elevator who objects to Constantine smoking looks suspiciously like Penguin in a hoodie, there’s a good chance that these strange almost-parallels are more deliberate effects of the knightmare.

As with all of these more abstract, conceptual issues, Tom King excels at thematic depth. Titling the arc “Smoke and Mirrors,” he intertwines doubles, parallels, smoke, and dreams in a tapestry of confusion – but also reveals both the thematic heart of his Batman run – “Can Batman be happy and still be Batman?” – and advances the mystery of what, exactly is happening after The Tyrant Wing. The dream Constantine tells us that all of these dreams are caused by the Scarecrow gas. In doing so, we have come to an exact parallel to Grant Morrison’s Batman RIP, when the Black Glove attempted to destroy Batman’s mind with drugs, causing him to hallucinate all his failures. However, where Morrison asked the question, “Who is Batman?” with the answer being, “The immortal figure of the indomitable will, but also an eternal child trying to fill the hole in his life,” King asks, “What is the purpose of happiness since life always ends?” Wouldn’t it be better, in the end, to just try to save people?

We’ll have to wait and see what King concludes in issue 100 (or his teased final issue, 105, where Batman and Kite Man discusses their adventures in a bar). But for now, it’s the eternal question. All things end – is the happiness we get before that end worth it?

Final Thoughts: A heartbreaking glimpse at what could have been and a terrifying glimpse of what is now.