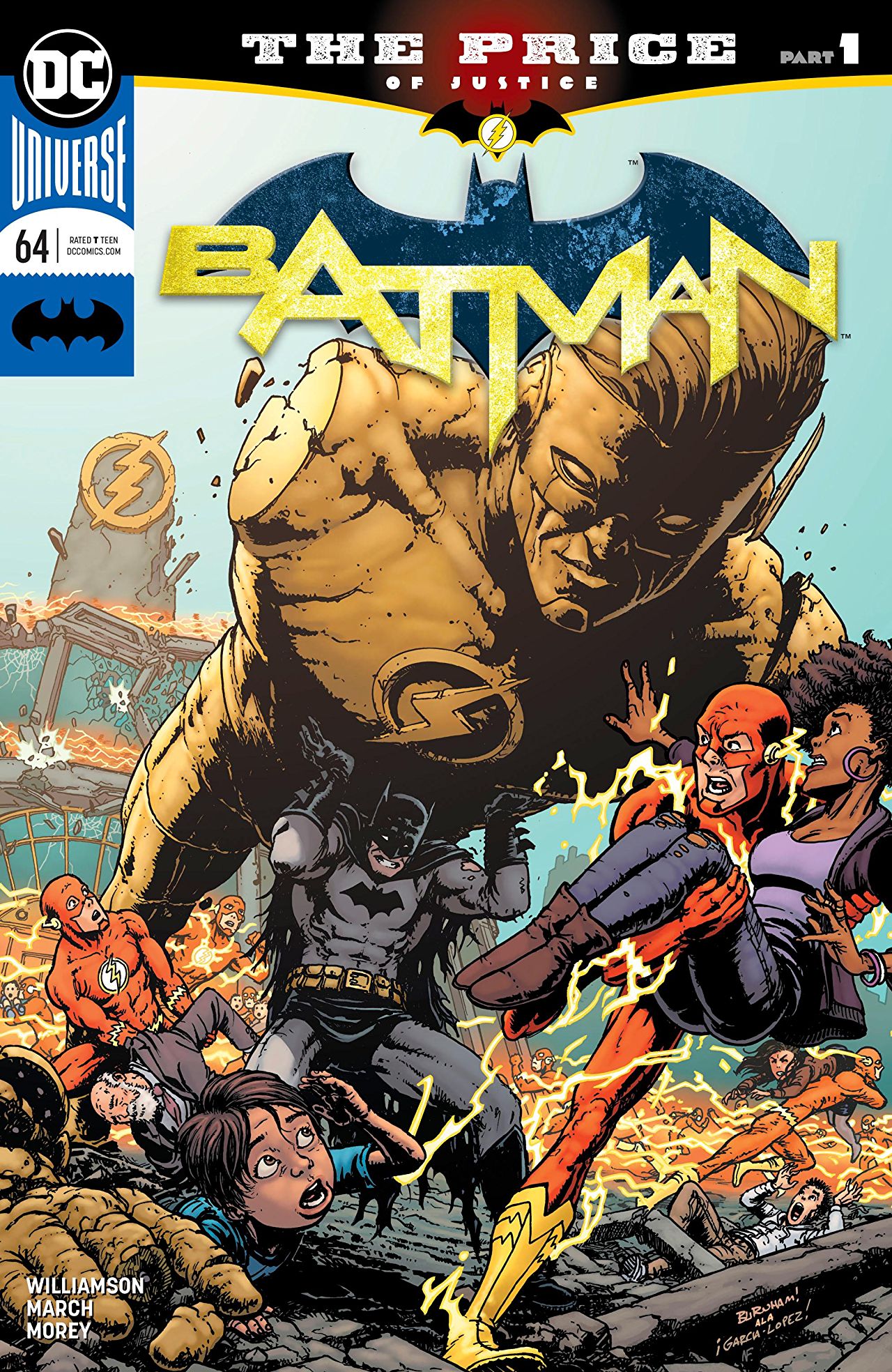 Overview: As Batman and Flash deal with the fallout from Heroes in Crisis, Gotham Girl begins a mysterious campaign.

Synopsis (spoilers ahead): The Price of Justice, part 1 of 4. This storyline takes place between Batman #57 and 58, per Tom King’s confirmation on Twitter.

Batman prepares to perform an autopsy on Wally West, but cannot bring himself to do it.

On Oolong Island, the Justice League battles rogue Amazo robots. Batman is distracted by memories of the horrors of the Sanctuary slaughter, but still takes down at least two of the bots. Superman says that this battle represents the fifth crisis this week, and Batman and Flash both leave abruptly.

At the Flash Museum in Central City, a mysterious caped figure topples statues on the crowd of Flash fans and tourists. Batman saves some of them, but again, memories of Wally assail him. Barry surprises him, then helps reassure the shaken crowd. Flash remembers the old days when Kid Flash and Robin leaped into the Batmobile together and confronts Batman before he can leave. He knows Bruce lied about Central City being on the way – meaning Bruce knew the attack would happen. Batman reveals that Gotham Girl, Claire Clover, has begun using her powers to perform these attacks. He wants to stop her, not only from hurting others, but from the death that further use of her powers will cause, just as it did her brother Hank (Batman #5).

Claire, meanwhile, has Hank’s body hooked up to a machine, promising to save him.

Analysis: Over a year ago, Joshua Williamson teamed up with Tom King to write the interstitial Batman/Flash crossover arc between DC Universe: Rebirth and Doomsday Clock, The Button. While that arc featured detailed, powerful artwork by Jason Fabok and Howard Porter, ultimately, it led to very little in Geoff Johns’ universe-altering plotline. A few heartfelt moments between Batman and his alternate version father, Flashpoint Batman, have popped up quite recently, as Alternate Thomas appears to work for Bane in Batman #50 and the recent “Tyrant Wing” arc (#58-60). Additionally, Thomas told Batman to stop being Batman, which almost certainly played a part in Bane’s plan to break Batman through his failed attempt to marry Catwoman. Now, with Tom King writing a television pilot for a month, Williamson takes the reigns for another crossover between Batman and the Flash, The Price of Justice.

Guillem March, perhaps best known for his iconic work on Paul Dini’s Gotham City Sirens book, brings his powerful, thin-lined and incredibly textured pencils to this issue. Veteran Batman (and Heroes in Crisis) colorist Tomeu Morey provides shadow-soaked pages, enriching March’s gift for the strange and foreboding. While his penchant for cheesecake does clearly mark his scenes with Gotham Girl, March still manages to make her manic aspect intimidating and unsettling. The revelation that she hopes to bring her brother back from the dead hints at Bane’s hold over her, revealed in Batman #50’s final page.

Williamson’s writing, though weak on capturing individual voices (Wonder Woman, in particular, spouts exposition woodenly), grasps the emotional moments quite well, and does some excellent structural work in the final few pages, contrasting Claire’s insanity with Batman and Flash discussing their concern. Though we know this issue occurs after the start of Heroes in Crisis, it seems likely that it happens between issues of that event, as Batman and Flash’s investigation is said to have “hit a wall”. The timeline pileup here is impressive – Heroes in Crisis, the Batman title, and the Flash title – but Williamson manages to make it all flow smoothly. Hopefully, the demands of the event and Tom King’s plans won’t hamper making this crossover as much as The Button was hindered by Doomsday Clock and last minute changes. Whatever the conclusion, however, Williamson and March craft a darkly thrilling first issue together.