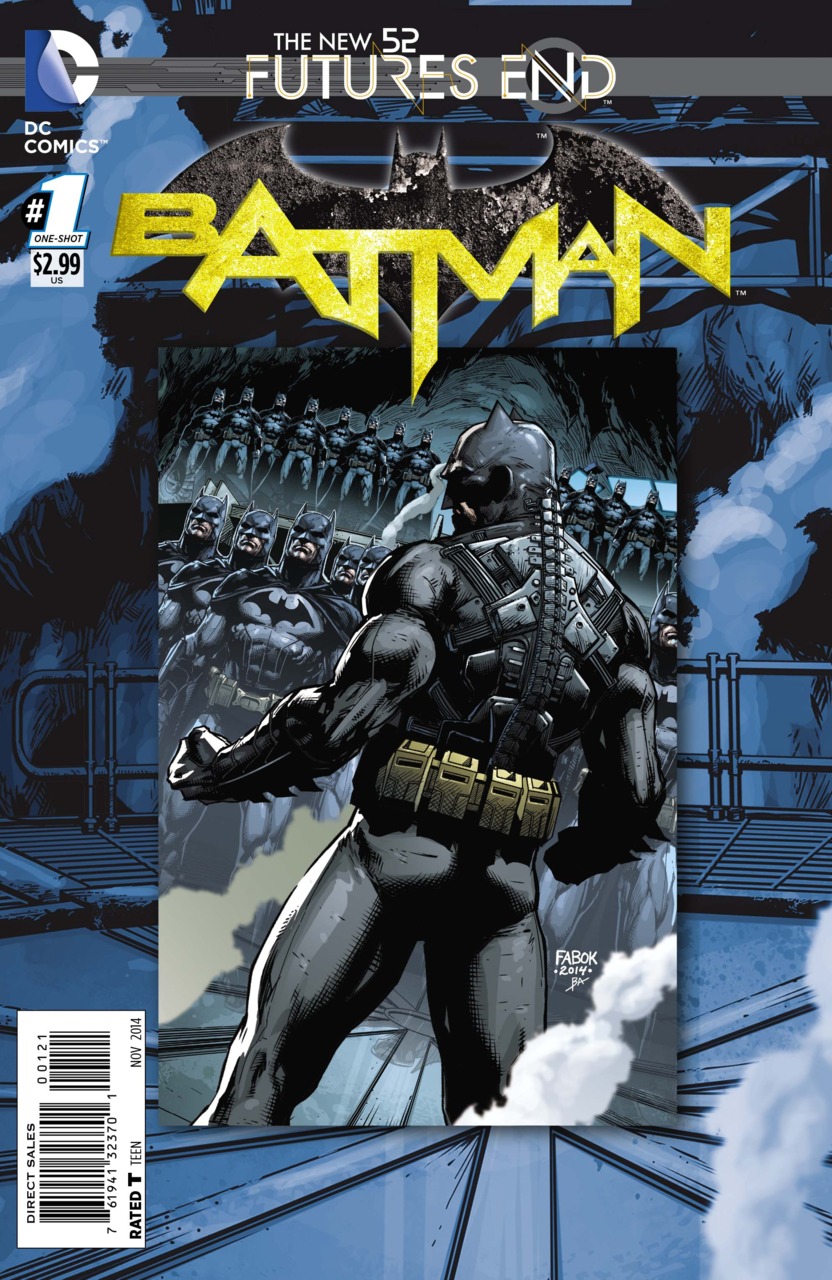 This may have been one of the coolest issues of the Futures End special, so far. Ray Fawkes and Aco deliver an awesome story about a Batman who is extremely decrepit after about 11 years of crime fighting. His body is done. He is spent. He is only held up by his special suit, gadgets, and drugs.

Now, if this sounded familiar to you after reading, then you might want to go check out Detective Comics #27 for Snyder’s story in there. This ties directly into that, and kinda gives us an origin for this change in direction.

Here, Bruce has tried to clone himself, but can’t get it to work. The process is incomplete. He has a mechanical exterior spine protruding from his back, from a past injury that goes unexplained. Which didn’t hurt the story, but added a mystery to it. Bruce suits up, and with the drugs, and electronic enhancements, only give him about forty minutes to do what he needs to do.

He he heads to Lexcorp, getting through all of Luthor’s security protocols, as it seems they have grown to knowing each other quite well. Once Batman gets through, he sees that Lex is continuing his process he started in Forever Evil – the cloning of Superman. And he has countless stasis tubes of them through the lab. He takes the serum compound he needs to perfect his own cloning, and rigs the room to blow, when suddenly, he is attacked by Bizarro! Which is an awesome idea. We are always putting Batman vs. Superman, but why not Bizarro. It makes more sense that those two would fight. However, the nanomesh is failing, and Bruce is dying. Alfred constantly makes sure to remind him of that.

Batman somehow escapes and barely makes it back with the compound, and he uses it to begin the cloning process we see in the story “27”.

Aco’s art looks really great here, as we see him take advantage of the futuristic setting. He gives Batman an new, cool suit. Bizarro looks cool, even having trunks for the old school fans. The Bat symbol looks like the new Batfleck symbol. And there is a scene showing us the Batfamily. And let me just list them off, as I found this interesting: Red Hood (normal?), Black Canary (in League of Assassins getup), Strix (still a Talon), Batgirl (Stephanie is Batgirl), Batwoman (a vampire), Bane-Babs (see the Batgirl Futures End), Nightwing (that’s right. Nightwing, not an agent), and Catwoman, Bluebird, Batwing and Red Robin (all seemingly the same). So are any of these red herrings, or are they just pointless filler images? Someone ask these guys, because I don’t know.