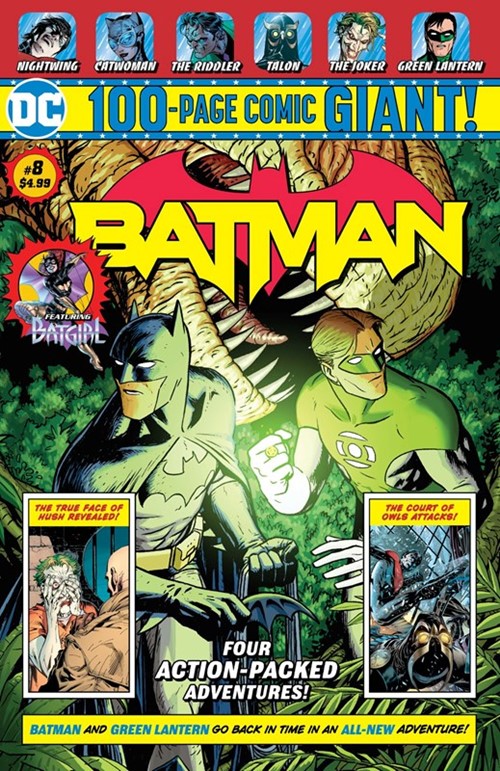 Overview: After Batman recovers from his trip to Gorilla City and Thanagar, he heads to Dinosaur Island with Green Lantern in pursuit of Vandal Savage and the mysterious egg.

Synopsis (spoilers ahead): Batman wakes up in a Hall of Justice sickbay with Hal Jordan, Green Lantern, and Vic Stone, Cyborg, waiting for him. They run through his last adventures in Gorilla City and Thanagar, as well as the discovery of Vandal Savage’s involvement in the hunt for Riddler and the egg. The JLA’s scanners get a hit on the egg in Dinosaur Island, so Batman and Green Lantern head over to find it. When they arrive, Batman enthuses about his love of dinosaurs.

As they travel through the forest, they are forced to fight off a few dinosaur attacks, likely caused by Savage and the egg. Hal expresses his dislike of Savage’s conqueror’s mentality. They find Savage and the egg in a cave, but Savage disappears, and as they approach the egg, they find themselves transported just as Batman was transported to Thanagar. However, this time, Batman and Green Lantern find themselves in history, meeting Jonah Hex, riding a horse and looking for trouble.

Analysis: The sixth (of twelve) installment of Brian Bendis’s “Batman Universe” story, which somehow connects to his new Young Justice storyline with the character of Jinny Hex, solidifies the general feeling that Bendis plans to use each twelve-page issue to show Batman encountering something and/or someone cool. While this strategy is perfectly fine for a momentary distraction, it doesn’t really say much meaningful about Batman, and isn’t that exciting an adventure, as Bendis is more interested in providing fun moments than deeply engaging readers in Batman or his friends’ lives and struggles. The somewhat annoying immaturity of some of the character interactions – Cyborg’s opening joke pretending to be Green Lantern, or Batman’s repetition of “gorgeous creatures” whenever a dinosaur is mentioned – also prevents a full immersion in the characters, if they’re supposed to be the same characters in Tom King and Grant Morrison’s runs on Batman and The Green Lantern currently.

As usual, however, Nick Derington’s art lifts this series out of the realm of a rather forgettable plot and into real enjoyment. His thick lines and appealing faces combine with excellent storytelling to make the comic a real pleasure to read. The colors highlight this with full, bold tones, giving the brightness of the med bay, the lushness of Dinosaur Island, and the mysteriousness of the cave a particular flavor. While the newly rebranded Wonder Woman Giant (formerly Justice League of America Giant) story just lost its main artist, Chad Hardin (replaced by Tom Derenick), most of these Walmart Giants have really excellent art talent, from Derington here on Batman, to Andy Kubert on Superman with Tom King, and Joelle Jones upcoming on Swamp Thing. With a promised increase of the size of the original content sections of these Giant books (as well as an expansion of where they will be available), the future of the DC Giants looks bright.

This issue also collects the eighth parts of Batman: Hush and the New 52 run of Nightwing by Kyle Higgins, and begins the serialization of Gail Simone’s New 52 Batgirl run.