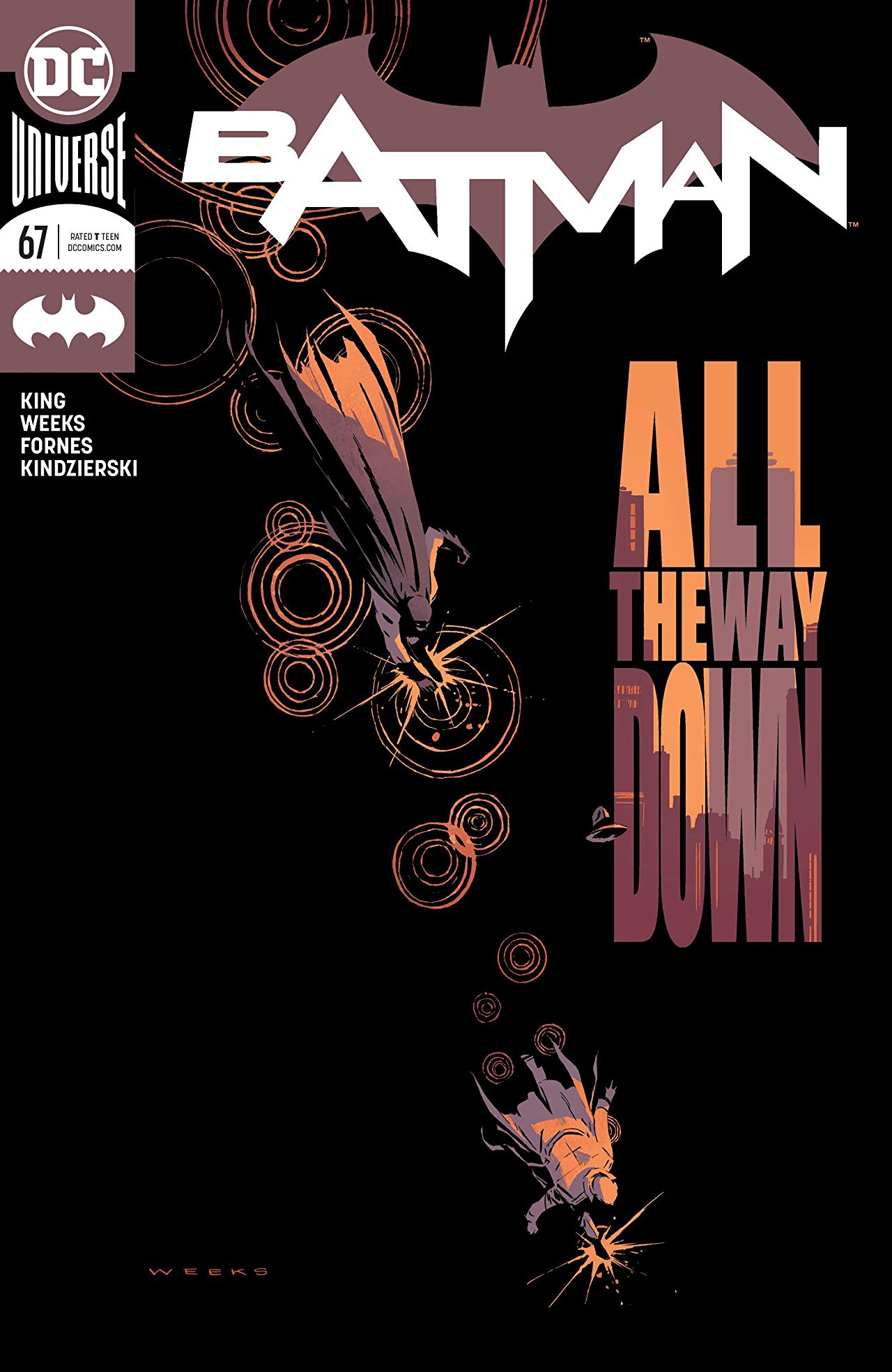 Overview: Batman chases a faceless figure from the top of a skyscraper to the depths of the sewers in another Knightmare.

Synopsis (spoilers ahead): Atop a tall building at night, Batman faces a masked killer standing over a murdered man. As Batman approaches the villain, he hears a simple sound: “Beepbeep.”

The masked man tips backward off the building, grabbing a power line one-handed, breaking it and swinging away. The man and Batman smash into a couple’s bedroom in the chase, leaving them bemused.

Batman snags the man’s foot with his grapnel gun, then jumps below, swinging him off of the rooftop. However, just as the man reaches the end of the line, he slips his boot off and escapes. Again, Batman hears the sound of beeping as they descend from fire escape to fire escape.

The man breaks through a window and hurls himself down a square spiral of a staircase, and when Batman lands over him, the man kicks him off a balcony and runs away, beeping.

Batman manages to catch up to the man, bursting out of a window and tackling him. They both plunge through a skylight into Porky’s bar (seen in the Batman/Elmer Fudd mashup, and Batman Annual #2). Porky attempts to greet Batman, but can’t get the words out, so he just directs Batman out the back door to continue the chase.

Seeing blood next to a sewer grate, Batman descends. He follows the blood trail, splashing in the water. Seeing the man standing at the edge of a large pipe, Batman tackles him again, and together they plunge into deep water. At the bottom, Batman rips off the man’s mask, finding a bloody and grinning Joker.

Batman narrates that the man he found murdered atop the tall building was named William Ernest Coyote. Asking the Joker why, still underwater, and the villain smiles, pulls out of prank horn, and says “Beep. Beep.”

Analysis: Tom King reunites with his Batman/Elmer Fudd and Batman Annual #2 collaborator Lee Weeks, assisted by last issue’s Jorge Fornes, with Lovern Kindzierski providing colors. I list the art team first, because the vast majority of these twenty-two pages are art-only, with words only fleetingly appearing. Unlike some issues where two art teams handle the workload, the contrast between Weeks and Fornes’s styles is downplayed, as they both work very well with each other’s styles (a fact underscored by the way King had Fornes echo Weeks’s page from the Annual in the last issue, of Batman and Catwoman on the rooftop, in the rain). The cold blues of Batman’s Knightmare, highlighted by muted but unnerving pinks, are delicately and beautifully chosen and implemented by Kindzierski, reminding one of the work Weeks did with colorist Elizabeth Breitweiser (who provides colors for this issue’s cover). All in all, the art for this issue is a lovely piece, evoking many emotions upon rereading.

King has structured the whole issue as a nearly wordless chase, similar to the first issue of the webcomic “Lady Sabre” by writer Greg Rucka and artist Rick Burchett or the first issue of Mark Waid and Chris Samnee’s Black Widow series from a few years ago. The geography of this chase takes Batman from the heights of a rooftop on a gigantic building to the subterranean filth of the sewers. Thanks to the hard work of Steph, my co-host on The Batman Universe Comic Podcast for our upcoming episode (releasing this Friday), I can highlight some of the common dream symbolism King is likely playing with here. The descent, of course, is fairly obvious – Batman’s diving deep into his subconscious trying to make sense of what’s happened to him, and his life story in general. The sewers, particularly, indicate that what he expects to find there is murky, and not something he generally would want to look at too closely. The final pages, where you see Batman breathing underwater in that particularly distinct dreamlike way connects to the state of babies in the womb, a sense of helplessness, of being out of control, of things simply not being “right” (since we normally breathe air and drown in water). King wields all of these elements in a way that’s not necessarily pinning Batman down to a specific symbolic interpretation, but the suggestions of each of these locations and actions create familiar emotions that help to underscore the way the whole issue functions like a dream, compared to our own dreams, which rarely have a conscious writer.

The whole issue is ultimately a play on the classic Looney Toons cartoon of Wile E. Coyote and Road Runner, with the constant Beep Beep’s, and the name of the murder victim. The endless battle between the predator and never-caught prey is clearly a parallel to Batman’s own endless war on crime. Kelley Puckett and Tim Sale created a work with a similar circular structure and message as a bonus tale to the Batman: Black and White volume 2 collection, titled “Night After Night” (check out the motion comic version). The tension between Batman’s goal – to stop crime – and his results – just having to go out the next night and stop it again – appear both aspirational and hopeless. We hope to be like Batman in our fight against our “villains” – never giving up – but we also seek peace instead of endless warfare.

After issues #63 and #66, which used the combination of words and images so unique to comics to really dive deep into Batman’s psychology over Tom King’s run, this issue felt like a bit of a letdown. It’s clearly a continuation of King and Weeks’s melancholy but enjoyable joke mashup of Batman and the Looney Toons characters, but after the depth of psychological and emotional investigation of the last two issues in the arc, it felt like even the symbolic depth couldn’t override the sense of whimsy that is a bit out of place after the last two. However, given that the next issue will come from the supremely humorous artwork of Amanda Conner, depicting Batman’s Knightmare of Selina’s hen party, this issue could be functioning as a pivot away from the passionate, humorless, tragic nature into something a bit more pointed and satirical in tone.

Time will tell if this issue goes down as one of the better ones in Tom King’s run. The artwork by Weeks and Fornes really stands out, but there’s a contrast in expectations from the content provided in the previous issues of this arc which still doesn’t quite work.