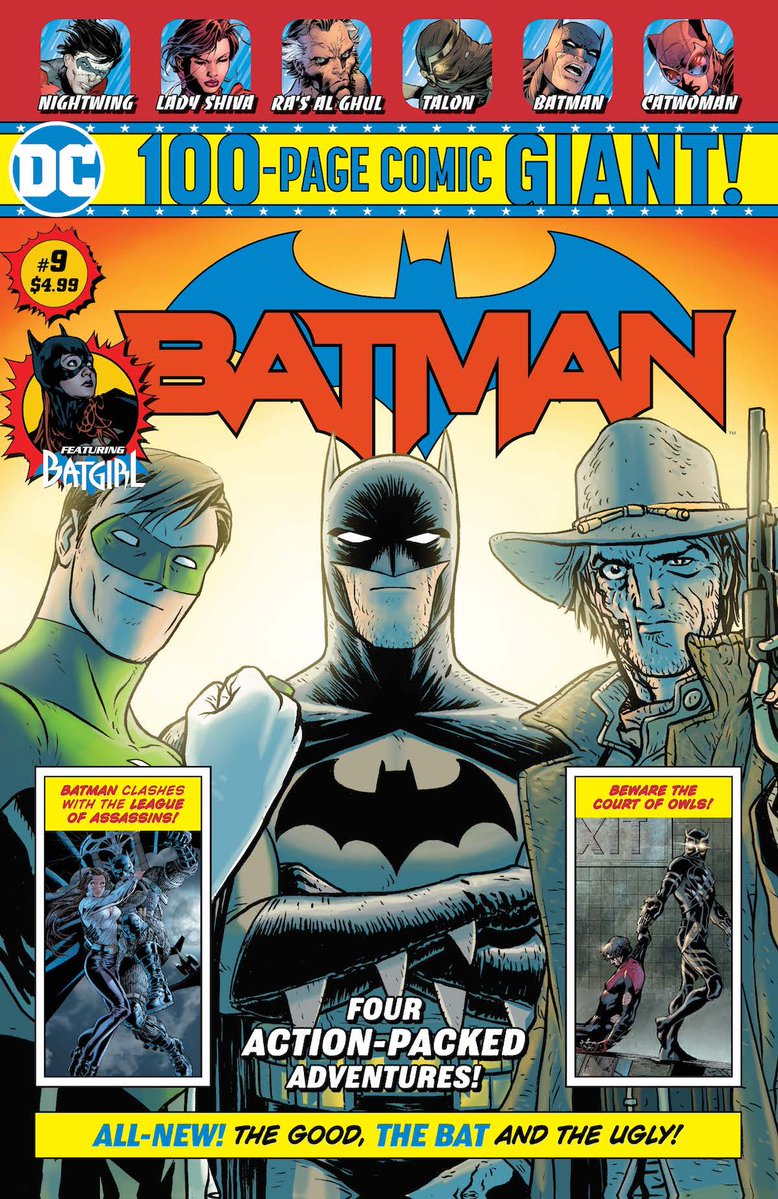 Overview: Trapped in the 1800s by the mysterious egg, Batman and Green Lantern team up with Jonah Hex!

Synopsis (spoilers ahead): Sent to the past by the egg, Batman and Green Lantern are confronted by Jonah Hex. Bruce takes off his mask to defuse the situation, and reveals his quest for the egg and that he and Hal Jordan are from the future. Hex takes them to a town to find normal clothes (for the time period), then Green Lantern transports them to shorten the six-day horseback ride to where Hex last saw Vandal Savage, mastermind of the egg caper. As they explore the area, looking for Savage, Green Lantern’s ring suddenly flares bright white, and he disappears. Before Batman and Hex can react, Vandal Savage arrives, holding the egg and leading a huge army of ninjas.

Analysis: Brian Bendis’s last issue of Batman: Universe (collected in the Batman 100-Page Giants sold exclusively at Walmart) featured a Batman who was a bit too relaxed and silly, waxing enthusiastic about his love for dinosaurs. This issue strikes a much better balance between the fun adventure that Bendis is telling and Batman’s serious nature. There are still some very Bendis-esque jokes – Batman mentions that he probably has something to do in the present, but Alfred keeps his calendar – but on the whole, Batman plays an excellent detective, problem solver, and judge of character in this issue. Bendis, who has been tying this series to his other work at DC, with a mention of Batman’s chase of the Riddler in Action Comics #1009, and the character of Jinny Hex in Young Justice, continues to tell the story of Batman and the time and space-warping egg, laying the groundwork for Jonah Hex’s possession of the egg in the past, now that Vandal Savage is confronting Batman and Hex. Interestingly, because Savage is one of the oldest characters in the DC Universe, this version of Savage could either be another time traveler or could simply be the version of Savage which was around in the 1800s.

Artist Nick Derington provides a wonderfully appealing Western America vista, and provides a lot of really excellent visual jokes with Bruce and Hal having to adjust to 1800s fashion, and Jonah Hex adjusting to Green Lantern travel. Though Derington and expert colorist Dave Stewart have excellent at the luminous yet dark nights that Batman primarily exists to haunt, the sun-drenched deserts and small wooden towns that our heroes visit are equally compelling. Derington’s depiction of the scarred face of Jonah Hex is an interesting contrast to that of Chad Hardin, who has been illustrating the classic DC character in the Wonder Woman 100-Page Giants in a similar time-travel shenanigans plot written by Jimmy Palmiotti and Amanda Conner. Both provide a good sense both of the strength of his un-scarred face, and the grotesquerie of his scarred side. This issue is definitely worth collecting for Derington’s art, as usual, as he proves himself for the seventh time a master of the clean, appealing line, and excellent character acting.

This issue also collects the parts of Batman: Hush, the New 52 run of Nightwing by Kyle Higgins, and Gail Simone’s New 52 Batgirl run.

Final Thoughts: The threads of “Batman Universe” begin to weave together as Batman travels through time in this enjoyable issue.