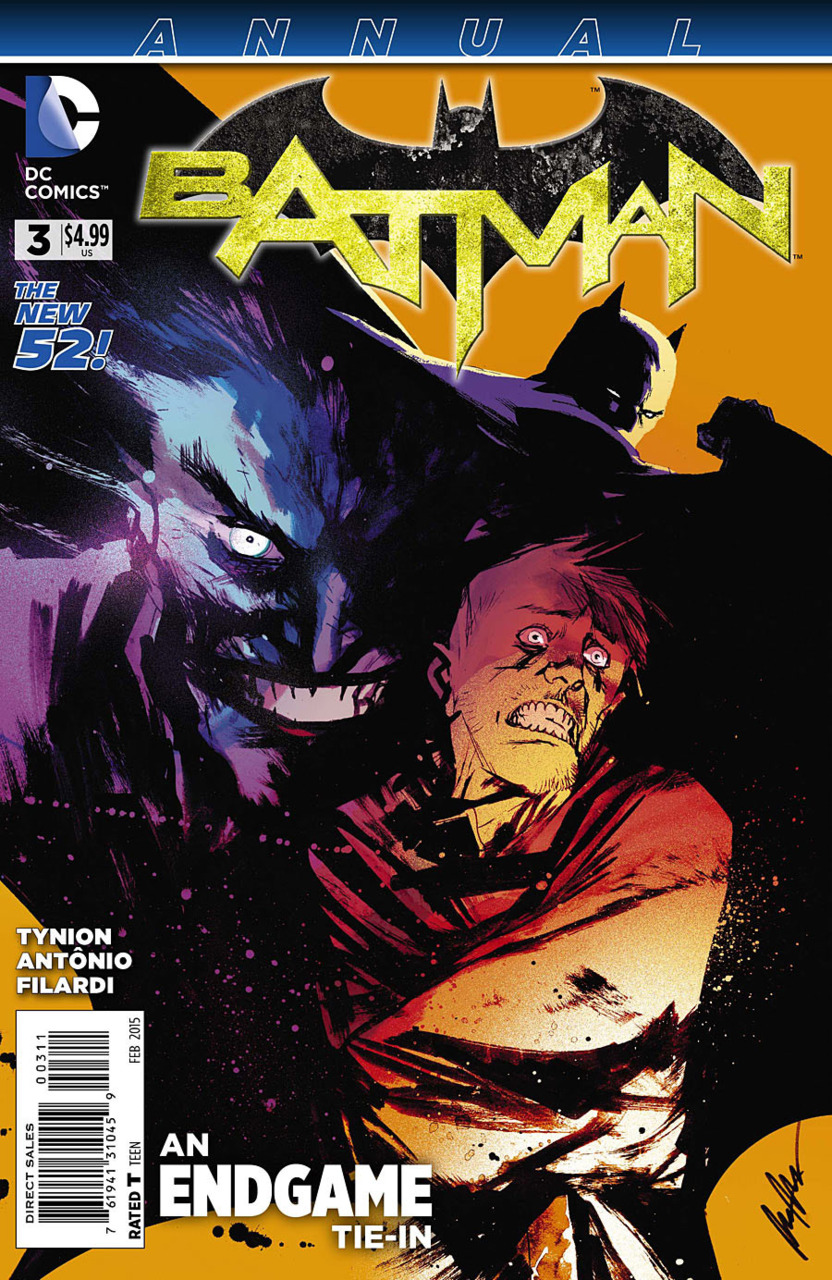 Opening up at the newly refurbished Arkham Manor, a woman approaches one of the cells and informs the inmate, Thomas Blackcrow, that he has a visitor. Tommy replies that he has no friends and wonders who would be there to see him.

We then flashback to five years ago, as we see the Joker and Harley Quinn are enacting one of their usual plans of mischief and mayhem. The broadcasted recording is shown to have been viewed by a younger Tommy Blackcrow who is wondering aloud to his editors of the Gotham Gazette why everyone seems to be so afraid of the Joker. The group informs Tommy that he hadn’t been around for the Zero Year and he didn’t understand what the city went through. Tommy’s editor however agrees to let him write an article about the Joker under a different light then he had previously been represented in.

A little while later, we see that Tommy is following a tip to Granny’s Gags & Gifts to find out more about the Joker. He lets the reader know that his friend Warren had originally published several articles about Joker and his crimes involving Gotham’s reservoir. Tommy then stumbles upon Joker and his crew, who are setting up their plans to steal several animals from the Gotham Zoo, gas them with Joker toxin and then release them upon the city. Joker ends up killing one of his henchmen when he becomes frustrated with the amount of cages needed for all of the animals and suggests robbing a nearby jewelry story for $65 million dollars worth of items. After melting the man’s face off, Joker admits that he could probably use the $65 million to buy the cages needed for his zoo and comments that “I guess he was a pal, after all!”

In the shadows, Tommy comes to a realization and chuckles to himself. He is heard by Joker and Harley who quickly pulls him out. Joker asks what was so funny, and Tommy informs him that he laughed due to the sad fact that even though his henchmen are afraid of him, Joker is alone and has no friends. As Harley begins to pull a bazooka out to kill Tommy, Robin bursts onto the scene shortly followed by Batman…the dynamic duo subdue the Clown Prince and Harley.

One year later, we discover that the Joker has escaped Arkham Asylum and that Tommy’s article about him was discovered in his cell. Warren and Tommy discuss these events at a bar and Warren worries for his safety knowing that Joker has escaped. Tommy eventually goes home to meet up with a friend of his who is crashing with him…only to discover that Joker is in his apartment and has strung up Tommy’s friend like a marionette. Joker explains that he agrees with what Tommy had written and has decided that Tommy will be his new friend! And clearly he couldn’t have any competition for that position…hence his friend strung up like a rag doll. Joker leaves his newfound “friend” and informs him to stay away from the Diamond District. Sometime later the GCPD arrive and help Tommy into protective custody; he changes his name, quits his job and moves.

Six months pass by, and Tommy is now secure in his new life…but the Joker has escaped again and he is terrified. After locking down his apartment, Tommy passes out from exhaustion with a knife in his hand….however he soon awakes to a message in blood on his floor “Miss You <3”.

Another year goes by, and we witness Tommy frantically driving home to his wife as he discovers the Joker is yet again out of Arkham. Arriving there, Joker is already present with Tommy’s wife and apologizes for having missed the wedding…as Best Man he would have thrown a tremendous bachelor party. Joker then begins to show a slideshow of pictures of his various victims to Tommy and his wife.

We then cut to several months before the present day. An officer in the evidence room of the GCPD receives a phone call from a frantic Tommy who is wondering if the Joker’s face is still in their possession. The officer informs him that it is, and asks why he calls every day to check. Tommy explains that the Joker had broken out a while ago and has yet to visit him…as he has done on every subsequent escape. Holed up in a cabin in the woods, Tommy is truly beyond terrified as he waits for the Joker’s arrival. A noise brings him to his basement where he finds the Joker making the fake masks used during “Death of the Family”. Joker gasses Tommy who wakes up later to find that Joker has disappeared…the GCPD arrive and inform him that there is no evidence Joker was ever present, and that it is possible Tommy is seeing things.

Back in the present, Tommy is escorted to his visitor who turns out to be his old colleague Warren. The two discuss Tommy’s recent turn of good health, and Tommy explains that he has finally found a friend to talk to in Arkham…but he has not recently seen him. The issue closes out with Tommy returning to his cell where we see his friend finally return to him. Tommy expresses great gratitude that Eric has come back; he was worried that the Joker might have come for him as he is his only friend in the world. The final panel shows the Joker himself with his hand on Tommy’s shoulder stating that he will always be there for him.

I rather liked this issue…not quite a definitive tie in to “Endgame” but it shed some light on the history of the Joker. This story reminded me a lot about the Animated Series episode “Joker’s Favour” where Joker calls in a “friend” of his to help him with one of his schemes…both men were extremely terrified about the Joker and tried to move away, change their name etc…but Joker always found him.

It was an interesting take to see Tommy being extremely arrogant regarding the Joker…I think every comic fan reading those pages thought “Oh, this is not going to end well.” And it truly didn’t, from one hectic event to another, Joker utterly terrified this man to the point of self incarceration in Arkham. I liked that this story linked in “Death of the Family” and we saw the extent to how long Joker was planning his big event. And lastly, who didn’t see the whole Eric Border (aka Joker) being Tommy’s new friend in Arkham. That I think was the only disappointing aspect of this story…and shocking ending that anyone could see coming.

Overall this issue was pretty decent, and I liked that it shed some light onto Joker’s colorful history…will this relationship of Joker and Tommy in any way reflect the relationship of Joker and Batman. If “Death of the Family” was Joker’s way of showing Batman how much he cared, what will happen in “Endgame” now that Batman has spurned the Clown Prince? Only time will tell what will occur and how this story will influence the Dark Knight and his allies.